328
VIEWS
Share on FacebookShare on TwitterShare on LinkedIn
ADVERTISEMENT

Thanks to the growing Hungarian film industry, filmmakers come to Budapest. Let’s see a few of the best Hungarian hotels where the filmmakers can stay.

Recently, Hungary has been rumored to be the biggest film-making center in Europe. Whether they are right or not, it is clear that many filmmakers have visited our country. Of course, these actors, actresses, and crew members need somewhere to stay, but Budapesters know that the city is full of better and better hotels, just waiting for a world star to step through their doors.

Here are the 8 best hotels for filmmakers to choose from. 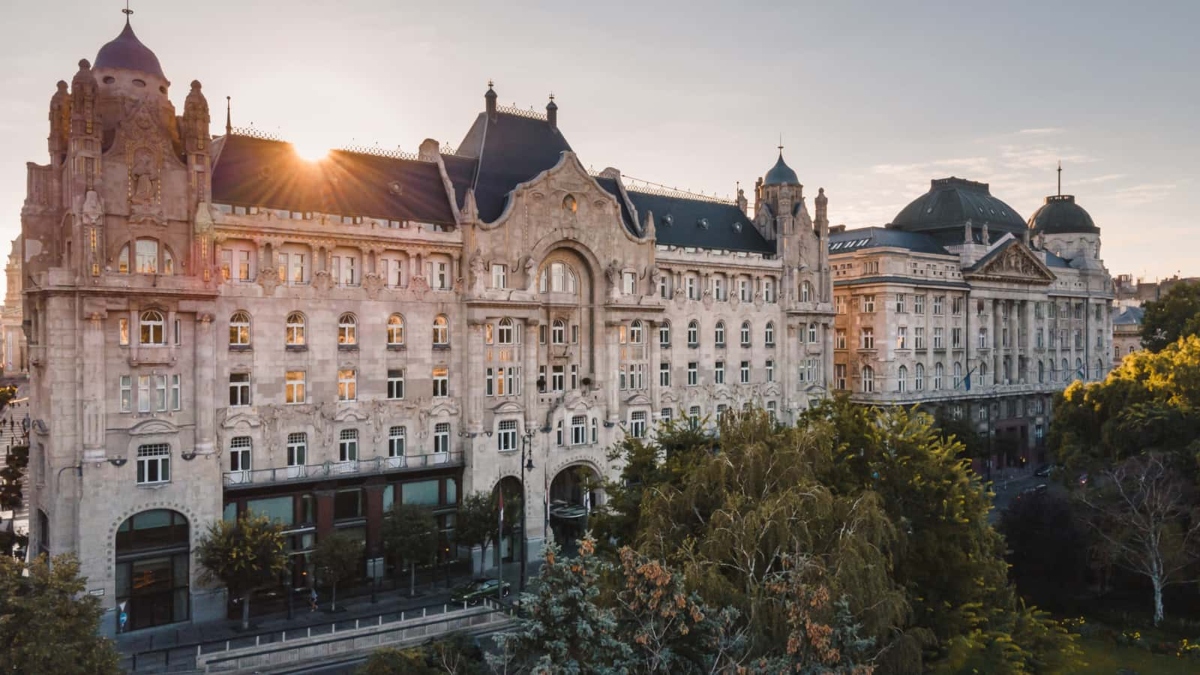 The biggest Hollywood stars have pretty similar tastes when it comes to cool temporary accommodation. So the most popular hotel in Budapest where celebrities have stayed during a shoot is the Four Seasons on Széchenyi Square. It is located in the 5th district of Budapest, on the line of the Chain Bridge, at 5-6 Széchenyi István Square.

The Gellért Hotel in Budapest has an incredibly long history. But it’s not just its spa that makes this impressive hotel famous. Hollywood productions have been filming here for decades. The “Red Sparrow” starring Jennifer Lawrence and “I Spy” starring Owen Wilson and Eddie Murphy. But it’s not just a filming location, it’s also a place to stay for stars, including Jennifer Lawrence and Eddie Murphy, and even Madonna.

Opened in 1918, the magnificent Art Nouveau-style Danubius Hotel Gellért is located on the banks of the Danube at the foot of Gellért Hill, in the world-famous Gellért Spa. The M4 metro line stops right next to the hotel, on Szent Gellért Square. The city center and the business district are a 10-minute walk away. Hotel facilities include free parking, room service, bar, and restaurant. 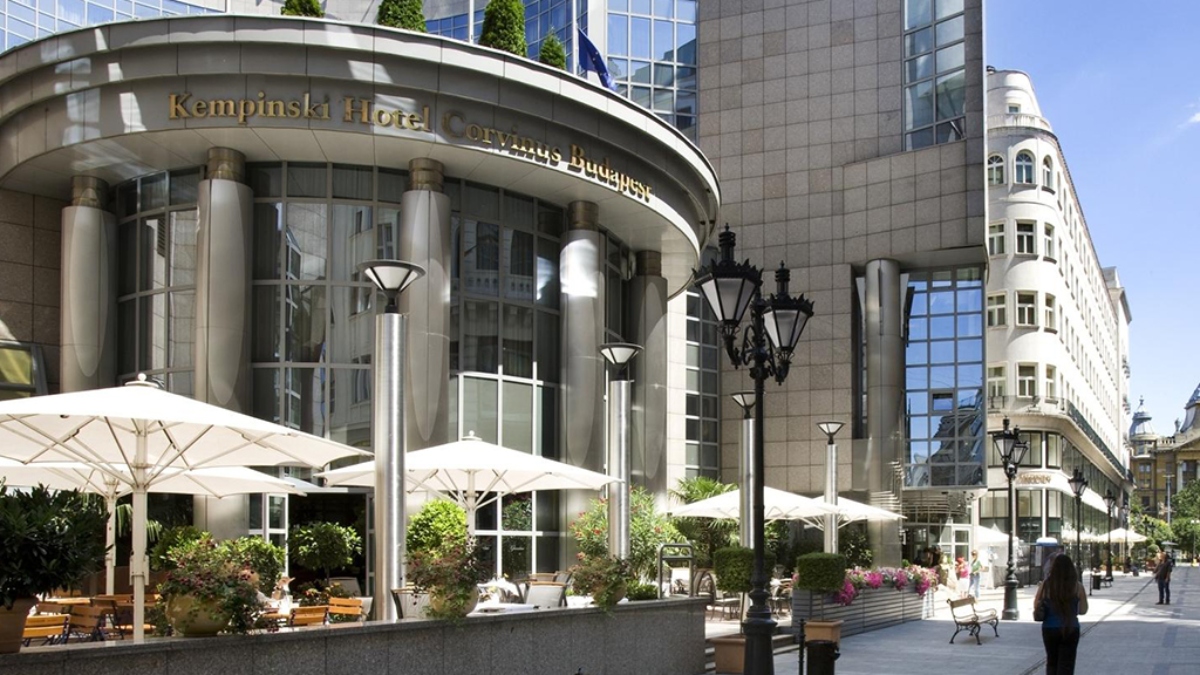 The elegant Kempinski Hotel Corvinus is located in the center of Budapest, just a few minutes from the Danube and close to the city’s main attractions. The hotel has hosted the likes of Michael Jackson, Madonna, Eros Ramazzotti, and Arnold Schwarzenegger. No need to worry about being far from the airport. The airport, just over 15 km away, can be reached via the hotel’s shuttle service.

The Kempinski Hotel Corvinus opened in 1992 as the Grand Hotel Corvinus Kempinski Budapest. The C-shaped building was designed by József Finta. Located in the heart of the city center, the building was built as a hotel, with 316 rooms, 33 suites, 1,238 square meters of conference and event space, restaurants, bars, Kempinski The Spa, a beauty salon, and shops. 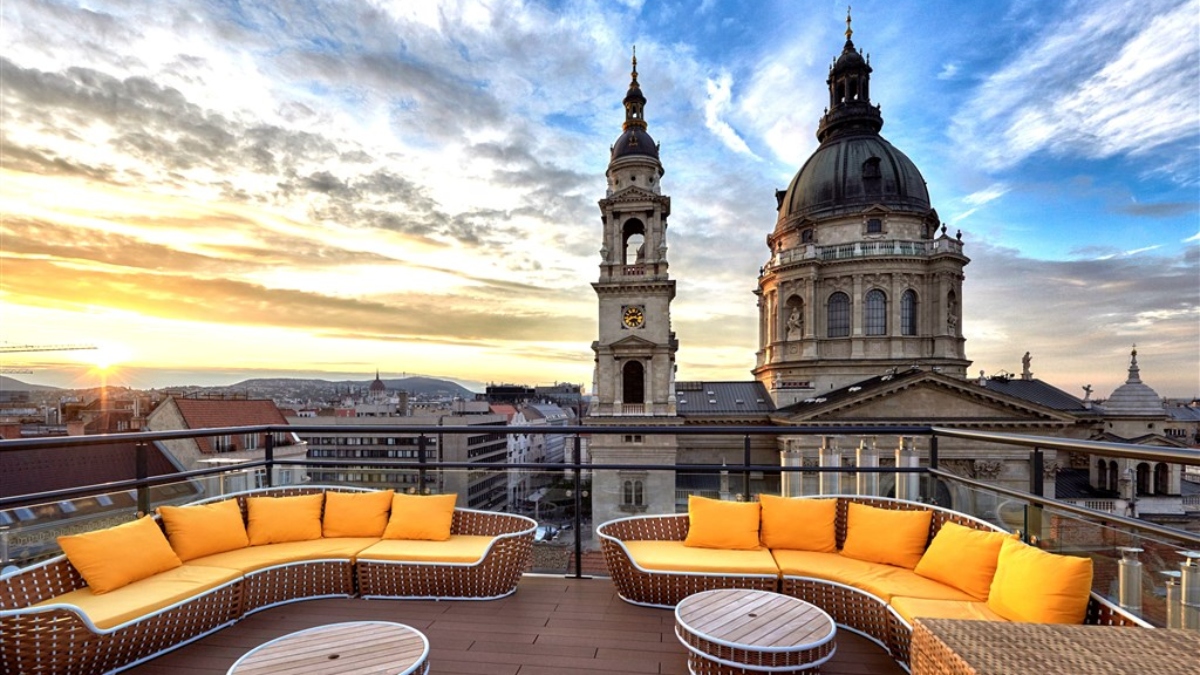 The music-themed luxury hotel is opposite St Stephen’s Basilica, a 6-minute walk from the Hungarian State Opera House and 3 km from the luxurious Buda Castle art exhibitions.

What the Gresham Palace is to actors, the Aria Hotel is to musicians. It’s where most singers and bands, including Muse, stay. Or stars whom you might know from films but who have come to Budapest to perform. Like David Duchovny or Will Smith. But the hotel has also hosted Mr. Big, aka Chris Noth, and the famous researcher Jane Goodall. 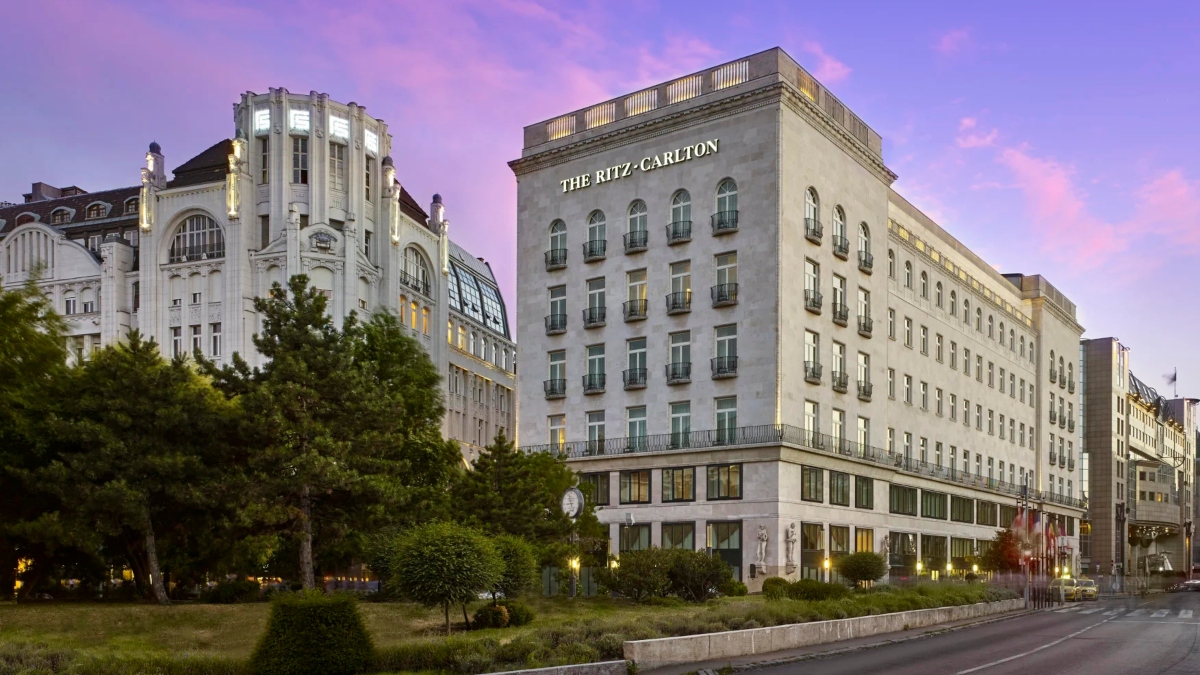 A short walk from St. Stephen’s Basilica, Erzsébet Square and the River Danube, The Ritz-Carlton, Budapest places guests in the center of one of Europe‘s most beautiful cities. Set within a 20th-century heritage building, the hotel presents modern luxury with a tint of tradition. The Ritz–Carlton, Budapest offers fitness and spa facilities in the heart of the city center, just a few minutes walk from St. Stephen’s Basilica and the Danube.

There is a restaurant and bar on site. Overlooking the boutique-lined pedestrian street or the beautiful Elizabeth Park, the spacious, elegant, comfortable, air-conditioned rooms and suites offer wired and wireless internet, satellite LCD TV, and a minibar. The hotel also offers a restaurant, bar, swimming pool, wellness center, and airport shuttle service. 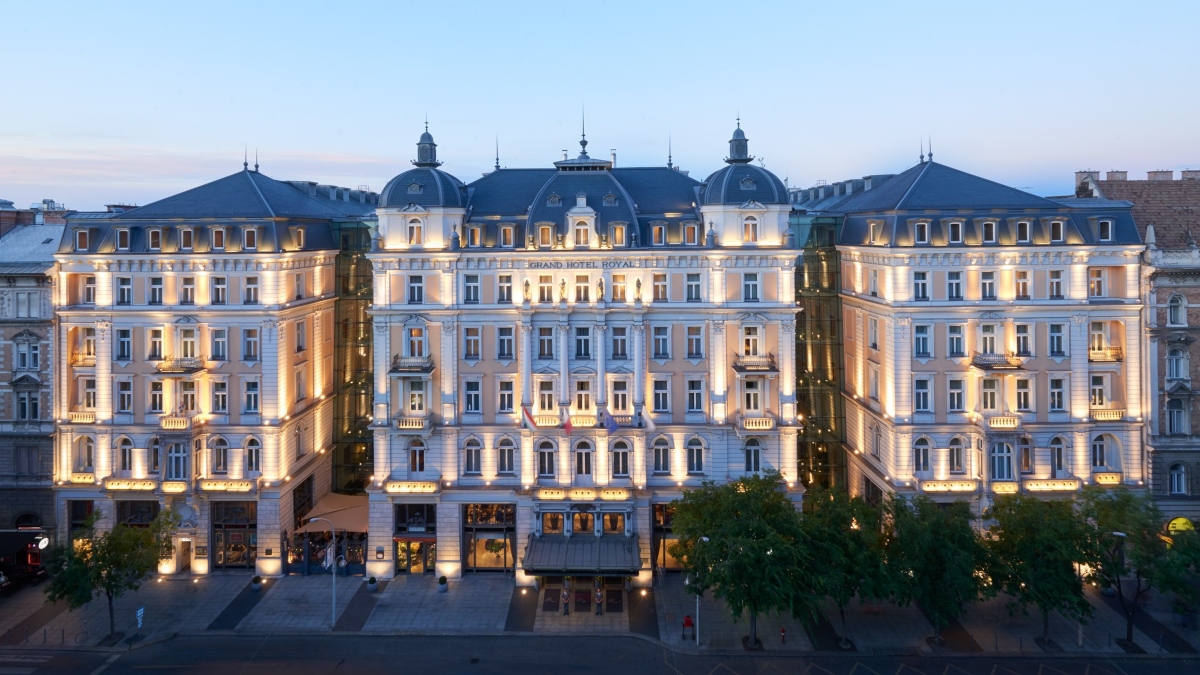 Proudly standing out from the heart of Budapest, the Corinthia Hotel is a legendary representative of Budapest hospitality. Within its late 1800s walls, it pays elegant homage to modern luxury, while also paying homage to the past that looms around every corner. The hotel is an ideal base for exploring nearby attractions such as Heroes’ Square, the Buda Castle, or the thermal baths of Széchenyi Spa, all within easy reach.

All of Budapest‘s attractions are easily accessible from the nearby metro and tram stations. HUNGEXPO Budapest Fair Centre is 15 minutes away by car. Of course, this hotel also offers a swimming pool, wellness facilities, parking, and airport shuttle service, as well as being a pet-friendly hotel. 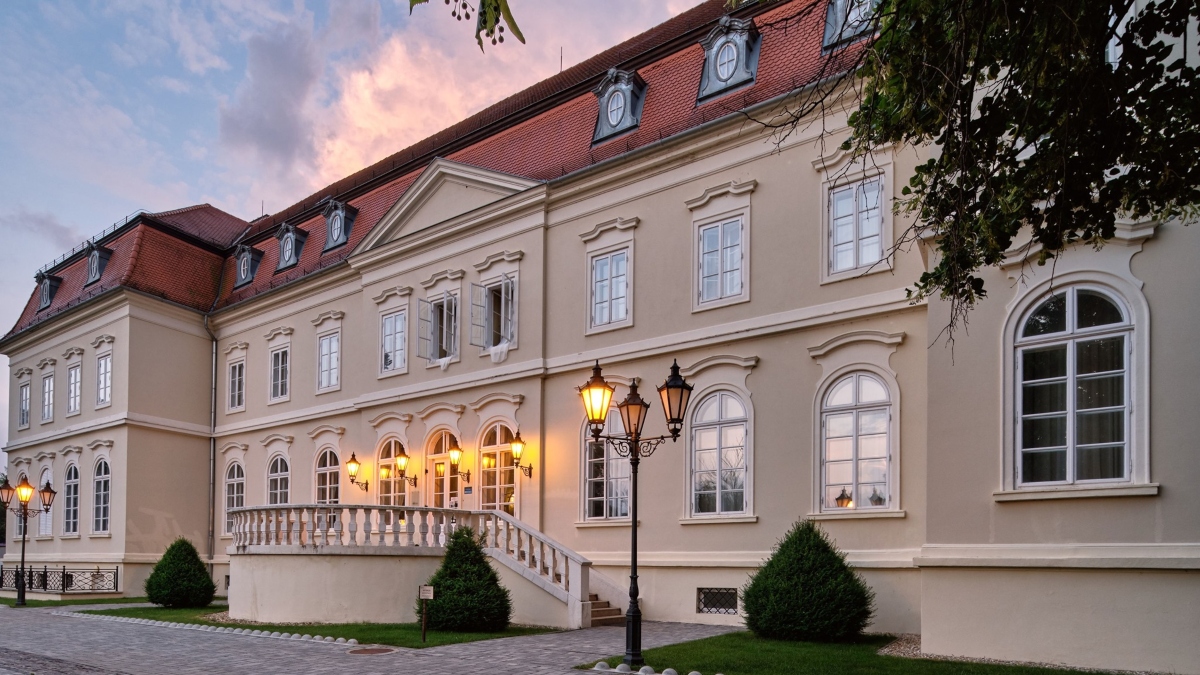 Although this one is not in Budapest, the neo-Baroque La Contessa Castle Hotel is set in the 7-hectare arboretum of Szilvásvárad, 25 km north of Eger, at the foot of the Beech Mountains. The hotel’s 650 m² spa area includes an indoor pool.

The high-ceilinged rooms are furnished with elegant period furniture. Free wired internet access is provided. Rooms are located in 2 buildings, the main castle building and a smaller building 100 meters from the main building. When the movie “The King” was filmed in Hungary, the Netflix crew found Szilvásvárad to be the perfect location. So the stars stayed nearby, at the La Contessa Castle Hotel. Celebrities such as Robert Pattinson, Joel Edgerton, Lily-Rose Depp, and of course Timothée Chalamet have stayed there. 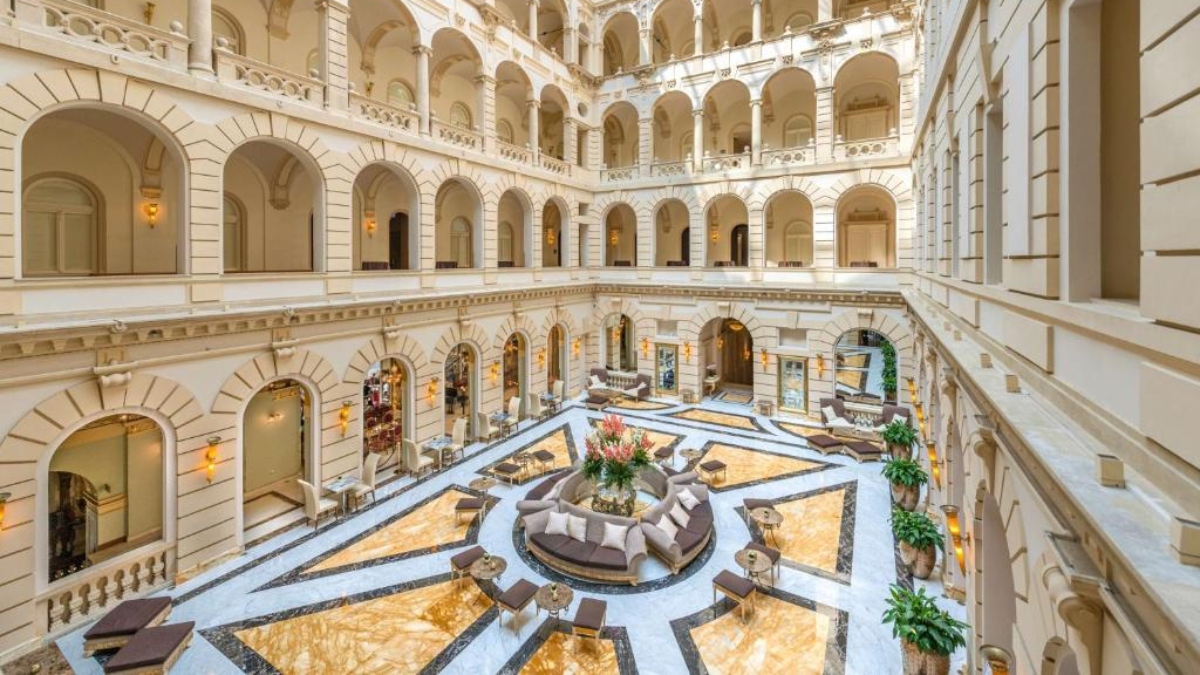 The Anantara New York Palace Budapest is set in an elegant 19th-century building in the heart of Budapest, close to the Opera and Andrassy Avenue. It offers free Wi-Fi and a spa area with a hot tub and relaxation pool.

The spacious, air-conditioned rooms are decorated with sumptuous Italian furniture, silk wallpaper and similar fabrics, and Murano chandeliers. A minibar, coffee, and tea-making facilities, a safe, and satellite TV are also available. The TV also has an interactive guest experience center. As we’d expect from the list, an airport shuttle is also available here. Due to the secrecy of the hotel, we can’t give any foreign examples of the guests staying here, but most Hungarians are familiar with the place, as Endre Ady, Kosztolányi, Karinthy, and many others from the Nyugat wrote in the hotel’s café.

True, that’s just a little part of the whole list of the best hotels in Hungary but still impressive.