While the original Dune wasn’t a masterpiece by any means, it was still a film that went on to develop a decent cult following.

David Lynch created a beautiful world, that was very much inspired by the books that it was based on. Arrakis felt different yet alive, and it was a world that a lot of 80s fans wanted to live in. Though the one thing that always bothered me about Lynch’s reimagining of the Arrakis was that it felt different.

It wasn’t the world that Frank Herbert envisioned it to be, and rather a world mostly devoid of logic at most times. It was fun, and campy yet it was not authentic or faithful to the original scriptures. So when I heard the news that dune was getting a brand new adaptation, and popular director Denis Villeneuve is the one directing it, I knew we were in for something great.

This brand new adaptation of Frank Herbert’s incredibly ambitious, intricately detailed and powerfully written science fiction novel has managed to become something historic. Director Denis Villeneuve isn’t trying to force his own vision down our throats with “Dune”, rather molding it to fit into all the constraints of Herbert’s original work.

His world is dark, a huge sand filled cluster with nothing else insight for the most part. Aside from the everlasting growling from deep within the ground, sandworms shaking the very core of their planet, terrifying the locals and the wildlife.

This is the nature of “Dune”, a desolate planet with isolation and loneliness being one of the key factors to the characters’ development. Yet there are also leaders, heroes and living figures who inspire the masses, who fight for the weak and to preserve their culture. Villeneuve captures that essence of the books by simply hiring some of the best actors in the industry. 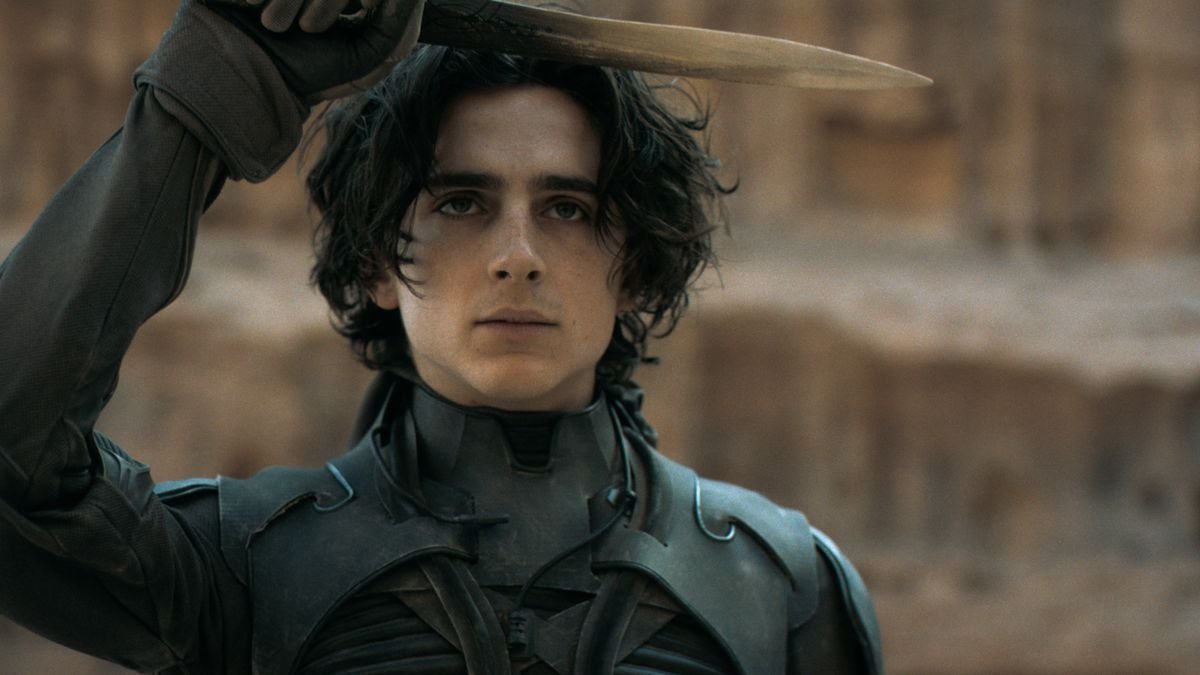 The most astonishing of these is of course Timothée Chalamet, whose portrayal of Paul Atreides, a young prince was one of the most captivating things that the film had to offer. Paul is surrounded by people that care about him, yet he feels alone, burdened by a sense of isolation and constant confusion. Chalamet is probably the best pick in this regard, as he’s played a character of this sort before in Netflix’s “The King”.

Aside from Chalamet, there’s a HUGE start studded cast here that will actually be too powerful to look at. This isn’t a Marvel movie, yet it still has some incredible A-List actors on board. Zendaya, Rebecca Ferguson, Oscar Isaac, Jason Momoa, Javier Bardem, Dave Bautista, Josh Brolin, Charlotte Rampling and Stellan Skarsgard all have fully fleshed out roles within “Dune”. The best part is that aside from Jason Momoa’s Duncan Idaho, I can’t single out any characters as my favourites but not because they’re forgettable, rather because they’re all equally as good.

Oscar Isaac’s portrayal of a weary yet fearsome King Leto Atreides the First was definitely a highlight in the film, then the spotlight was stolen by Josh Brolin as Gurney Halleck whose training is what Paul needed the most. Yet by the end of it all, the most interesting character was that of Javier Bardem, who’s called Stilgar. I won’t go into any spoilers but let’s just say that Bardem is still massively successful when it comes to having a powerful screen presence, even when he isn’t playing a main character.

“Dune” wouldn’t be as good as it is if it wasn’t for the incredibly tedious amount of work that quite literally everyone had to put into this film. It had a budget of 165 Million US Dollars, and it used it all to such an effect. The most important thing to note about this film is that it was rarely ever CGI. 90% of the film was shot in practical locations, with some outdoor desert scenes being shot in the Wadi Rum desert in Jordan, while Arrakis’ main outdoor sequences were filmed in the Liwa Oasis in the United Arab Emirates. 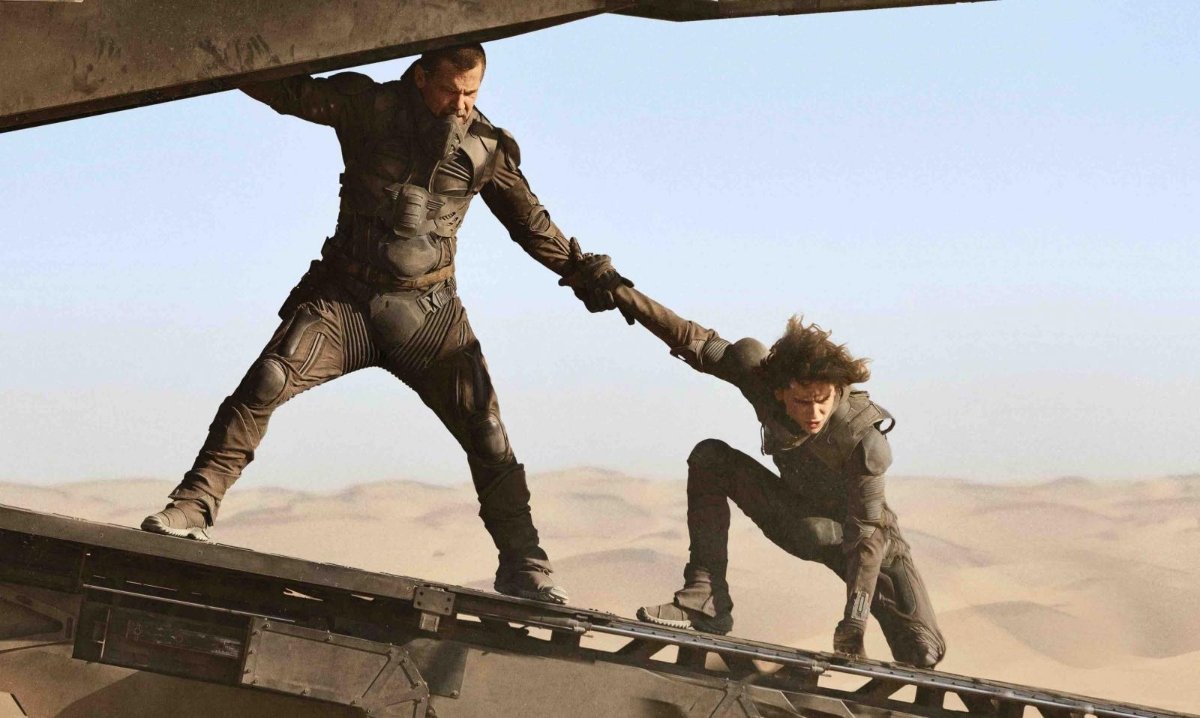 The film was also shot a lot in Stadlandet in Norway for the planet of Caladan. This was definitely a challenge for cinematographer Greig Fraser, who had to endure the desert heat like everyone else in the crew, while onlt having a few hours to shoot every day due to the intense heat strokes. The end results of all these hardships were definitely worth it, as each and every single shot within “Dune” is a story in itself. This film is so gorgeously shot, that you can’t quite literally ever take your eyes off of it.

The interiors were by far the most interesting aspects of set design in “Dune”. Surprise, surprise, they were done in one of Denis Villeneuve’s most favourite places to work; Origo Studios in Budapest, Hungary. The interiors were actually so gorgeous that you could barely take anything in during one scene, with intricate details being crafted into the walls.

The walls had proper symbolism that was taken from the lore ingrained into the tribal designs. Origo Studios‘ production staff is absolutely perfect for a film with such large, spacious and intricately designed interiors, adding a whole new layer of immersion to the film’s world. 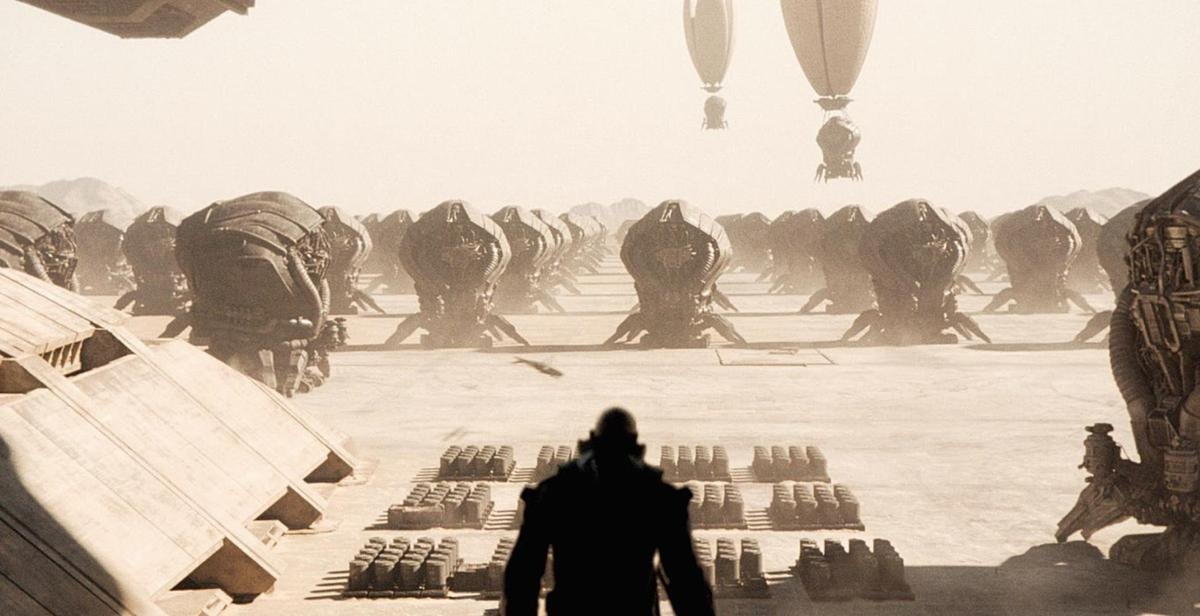 Now to talk about the thing that makes “Dune” so different compared to 99.99% of science fiction films you’ll ever watch; the music. You definitely already know that “Dune” is completely different to anything else if you’ve just seen the visuals, but the striking, visceral and at times; feral soundtrack is what certainly situates it into a world of its own.

“Dune”’s music was composed by the great Hans Zimmer, whose work has been hailed by mass audiences all around the world in each genre of film he’s scored for. Yet “Dune” is one of his works that will be jarring to listen to, however when combined with the striking imagery portrayed in the film; you’ll have a recipe for greatness. This is a film that takes itself seriously, and this soundtrack solidifies that. Thank you, Hans Zimmer.

So to conclude, “Dune” (2021) directed by Denis Villeneuve is something I’ve wanted ever since I heard the news that he was directing “Blade Runner 2049” back in 2015. 6 years later, we’ve finally got, and it is absolutely magnificent. Denis Villeneuve’s love for Frank Herbert’s world oozes out on the big screen, as he casts the biggest names in Hollywood, does the everything on practical sets, gets one of the best modern cinematographers and of course; Hans Zimmer for the music.

You can’t get so many of the best things all at once for one project if you’re not passionate about it, and Villeneuve’s passion for “Dune” is what you’ll witness when you watch this film. Every single aspect of this film is a masterful work of art, and I can only contain my excitement for the sequel which is announced to release sometime in late 2023.