The real Ravka - Where was Shadow and Bone filmed?

Hungary is home to a wide range of productions, from big Hollywood films to smaller-budget European arthouse movies, so there isn’t a time of year when you don’t have the chance to bump into a celebrity during a stroll around town.

“Shadow and Bone” series has recently debuted on Netflix. It was filmed in Hungary and is clearly Netflix’s biggest hit so far in this year. The first season of “Shadow and Bone” takes place across three fictional countries, but all feel like distinctly different settings.

The vast bulk of filming took place in historical sites in Budapest, Hungary’s capital and its surrounding areas, with the production lasting from October 2019 until March 2020 – just before pandemic restrictions first came into practice.

They filmed major parts at ORIGO Studios in Budapest, which is one of the biggest film studios in Europe, known for hosting big-budget productions such as “Blade Runner 2049” and “Atomic Blonde”. Now let’s get started to explore the main locations.

“Shadow and Bone’s” Keramzin orphanage scenes were filmed at Amadé Bajzáth-Pappenheim Castle in Iszkaszentgyörgy. In the series this was the place where Alina and Mal grew up and hid in the grass to avoid the Grisha assessment. 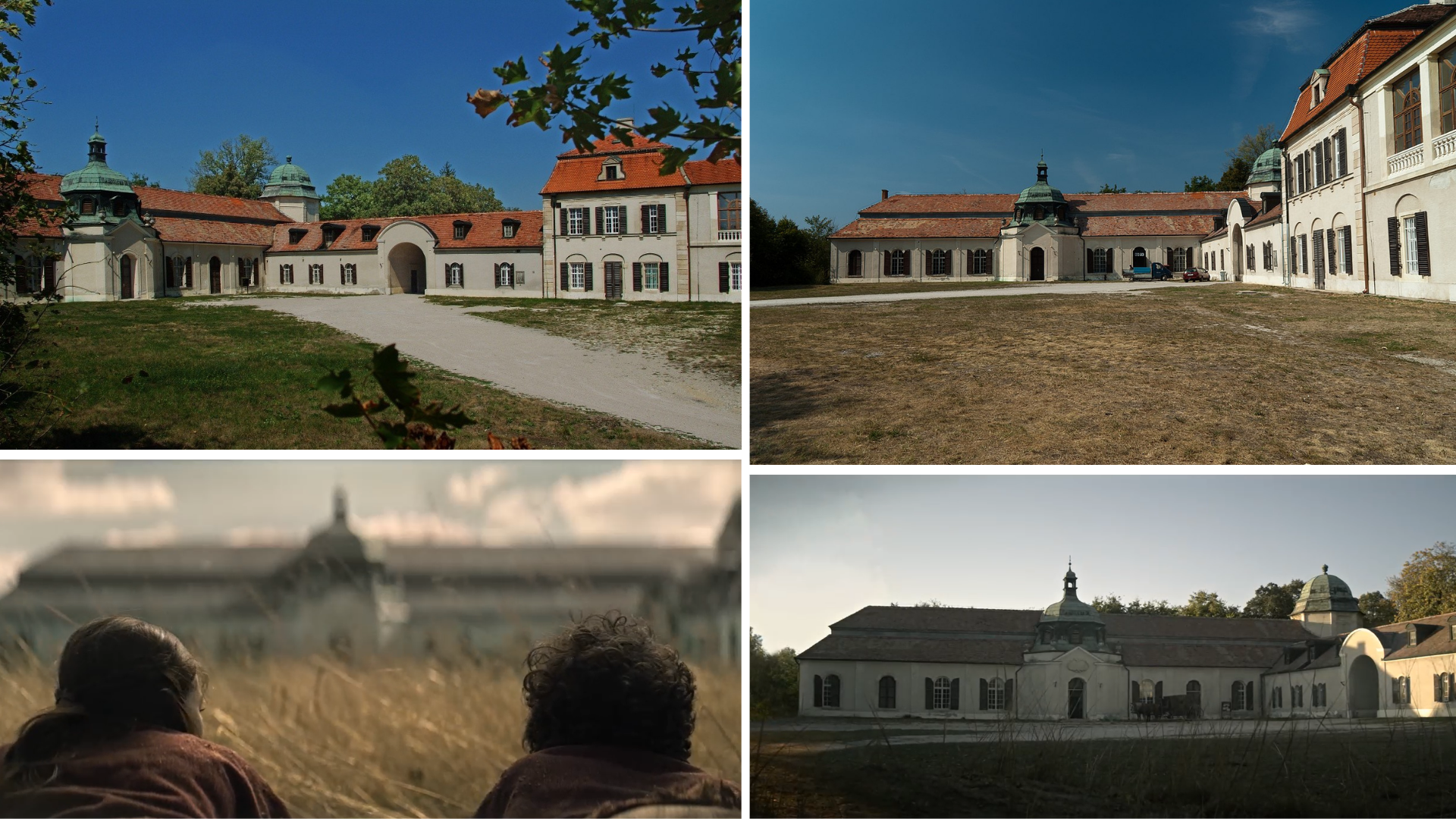 The audience with the King of Ravka at the Grand Palace (the ugliest building ever, according to Kirigan), was filmed at the big hall of the Ethnographic Museum of Budapest. We can see the Budapest Royal Palace courtyard in exterior shots, and its halls were used in certain scenes as well.

This was where Alina was presented by Kirigan to the Tsar and Tsarina as the Sun Seer, and it was here where the writer Leigh Bardugo made her cameo. A Ravkan symbol is added to the marble floor, but that’s the only major change. 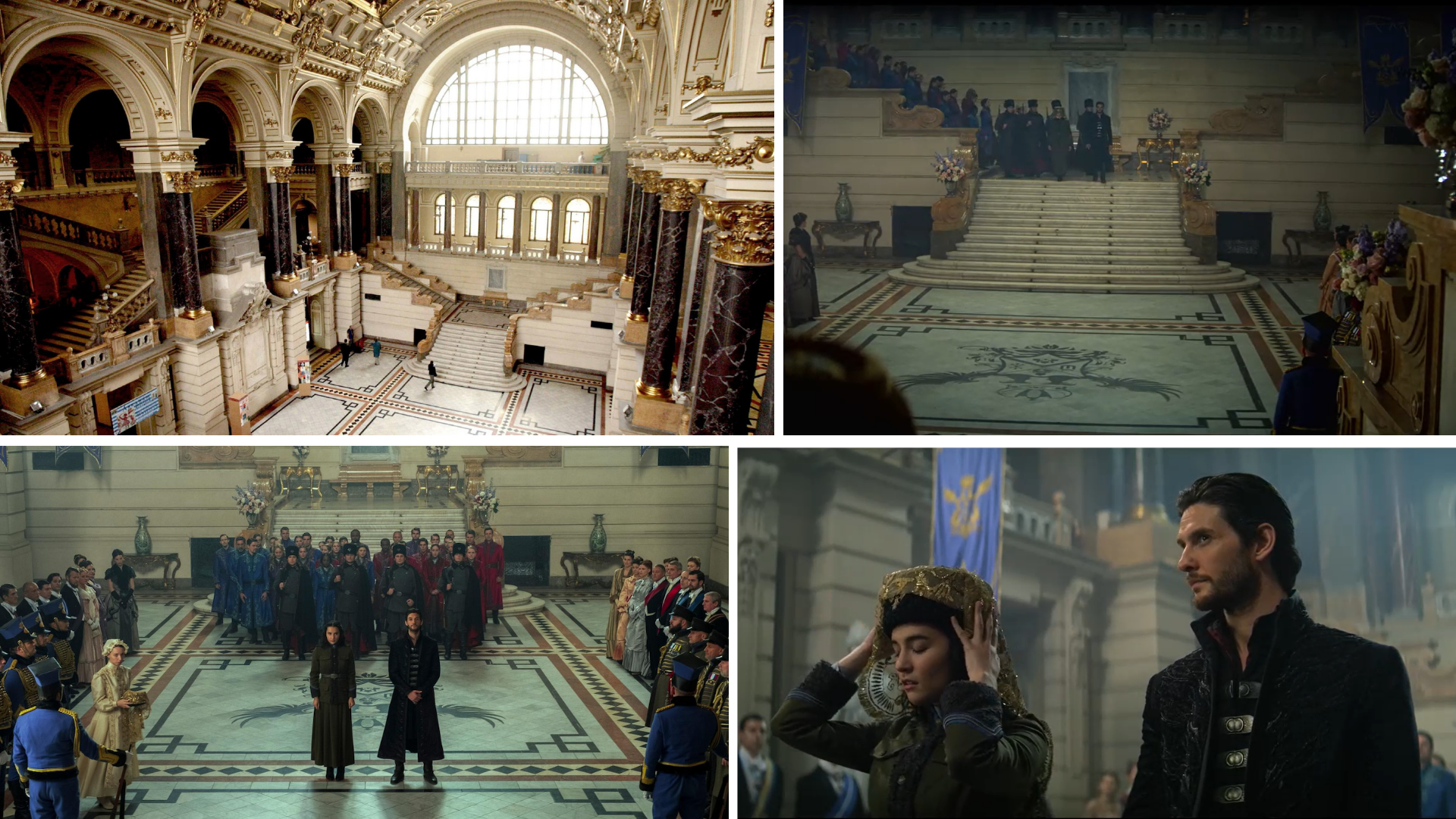 Several scenes were filmed at the iconic Buda Castle. Perhaps this is one of the most identifiable location in the series, because it is indeed known by many and appears in its full glory without alterations.

In episode four, the Dregs are looking for the blueprints of the Little Palace to steal them after crossing the Fold. Kaz disguises himself as a sculptor and uses this as a pretext to get the details of the gates from the archives, which are later broken into by Inej and Jesper. 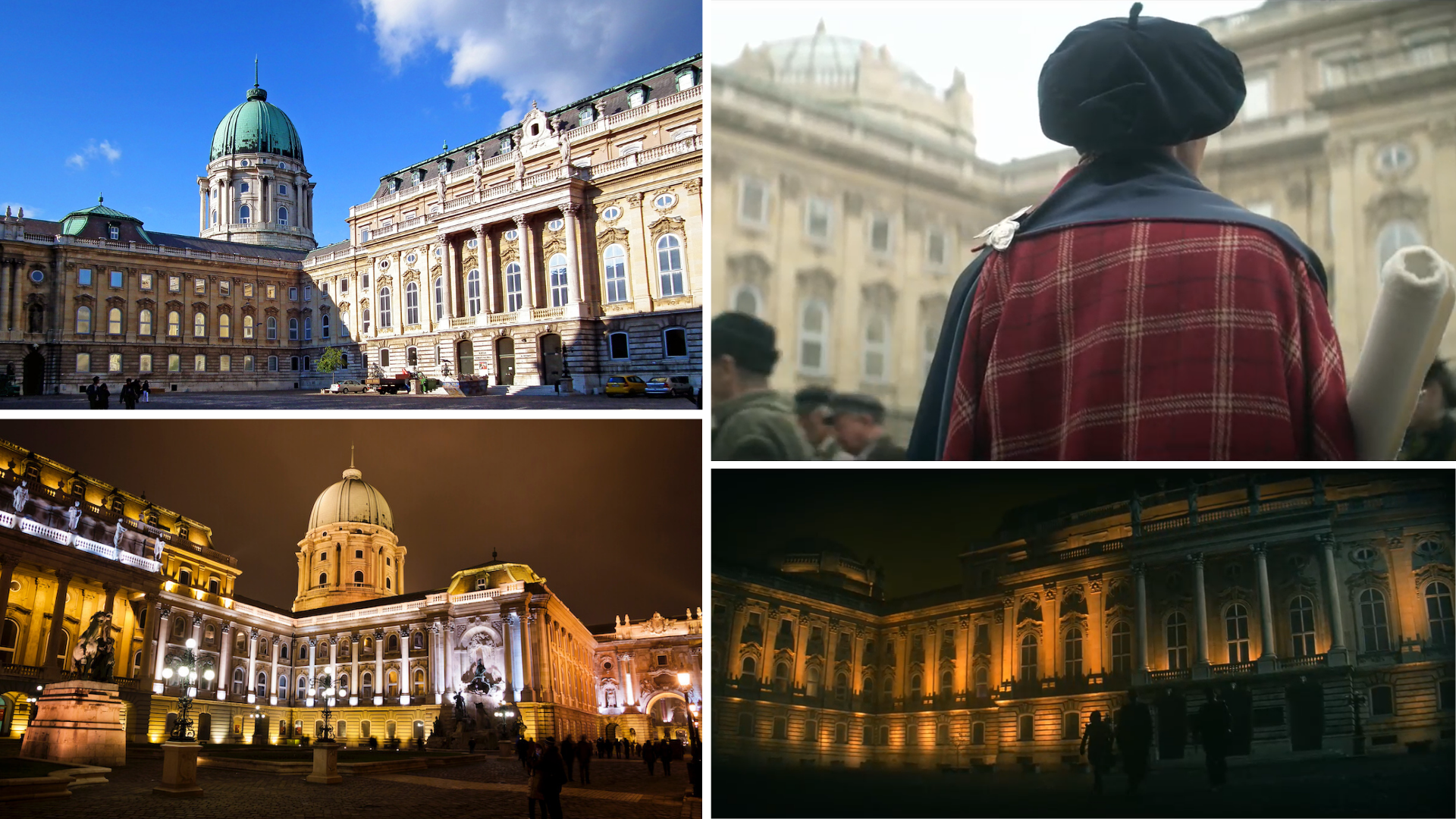 Medieval Buda Castle is also the palace courtyard for the travelling fair in Episode 5, “Show Me Who You Are”. It’s all part of the Winter Fete – the Ravkan citizens’ celebrations, while the King and Queen of Ravka’s ball takes place at the Little Palace at General Kirigan’s behest.

However, the interior of the Royal archives was filmed in another very popular filming location in Budapest. The old Budapest Stock Exchange Palace in Liberty Square (also known as the MTV building) is a monumental complex that has been empty since 2009. It served as the abandoned casino in Las Vegas in “Blade Runner 2049”. 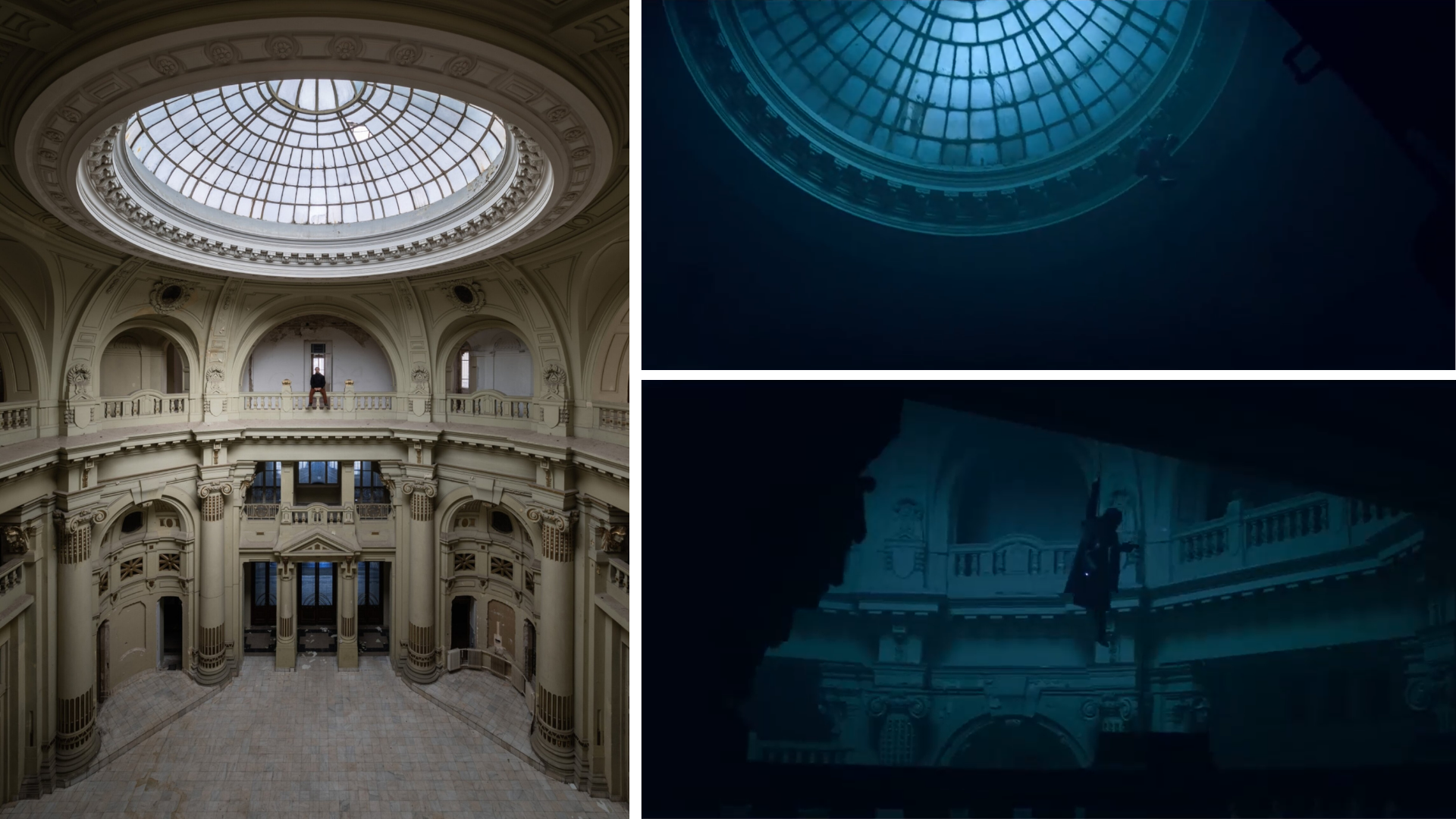 The Little Palace in Os Alta is the headquarters of Ravka’s Second Army, composed entirely of Grisha – with a few CGI turrets added to the palace’s own elegant architecture. Located in the city of Keszthely, on the west side of Lake Balaton. 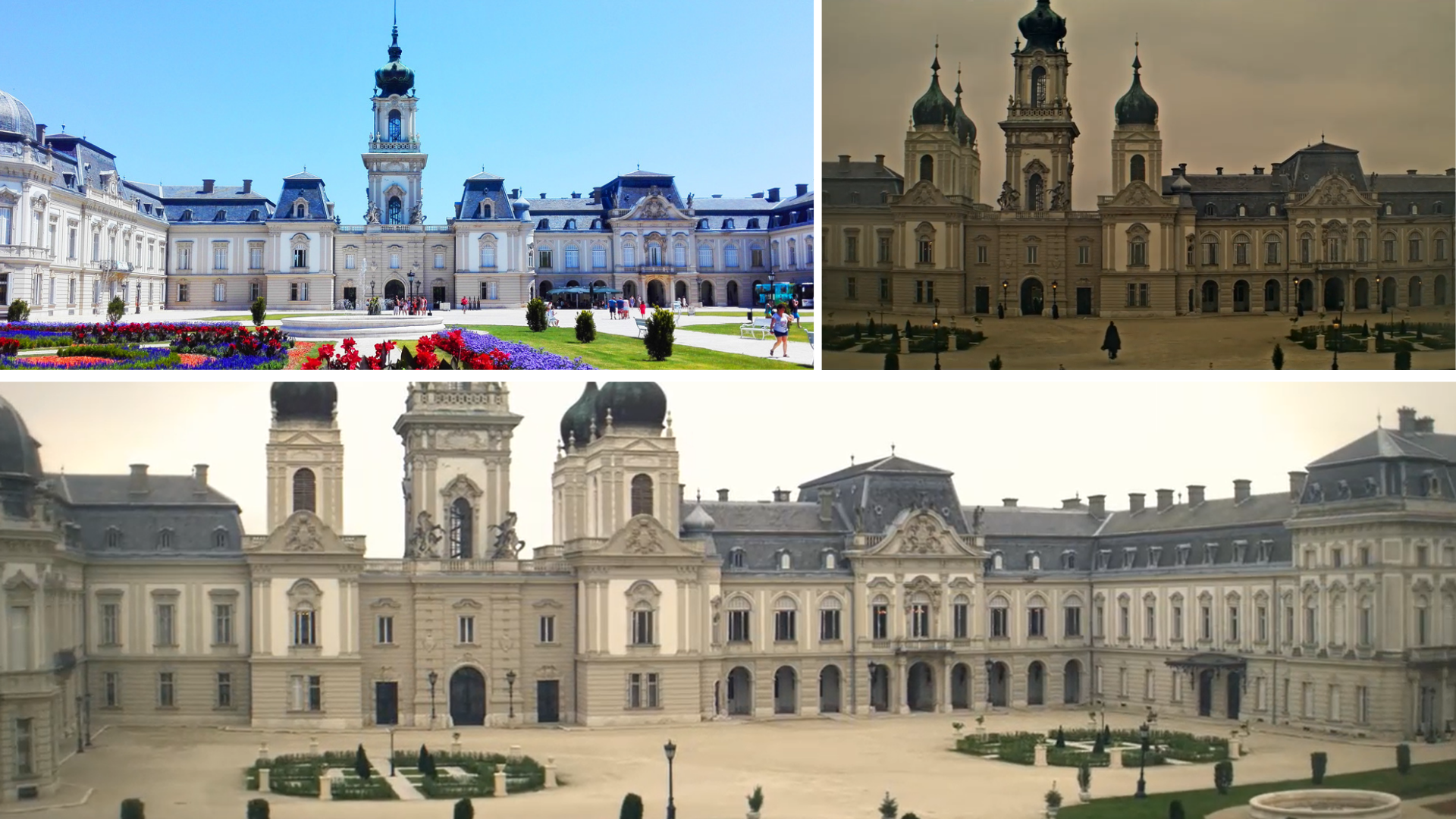 Many sections of the palace were featured in the series, including the library, the corridors, and the staircase with oak paneling. The room in episode five where the demonstration takes place is the concert hall. The Festetics Palace was also used as a filming location in the 2018 movie “Red Sparrow”.

The Grishas’ Little Palace is first seen when General Kirigan brings Alina there after the incident on the Shadow Fold. This place is also used when General Kirigan leads Alina to her new residence. We see the rooms and corridors again when Genya prepares her to meet the King and Queen of Ravka. 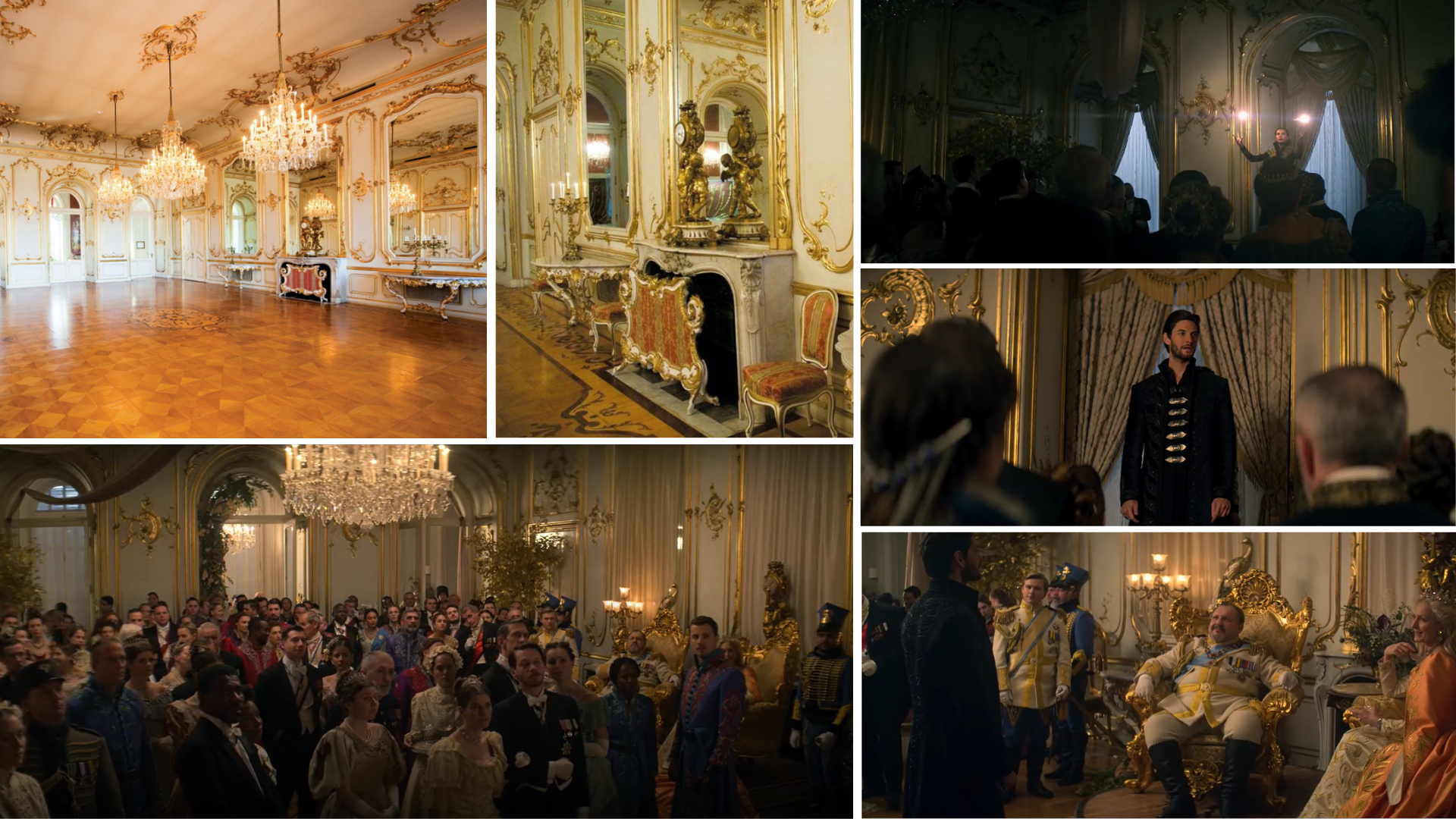 The wood-paneled staircase the Grishas descend is also part of the same Little Palace filming location. 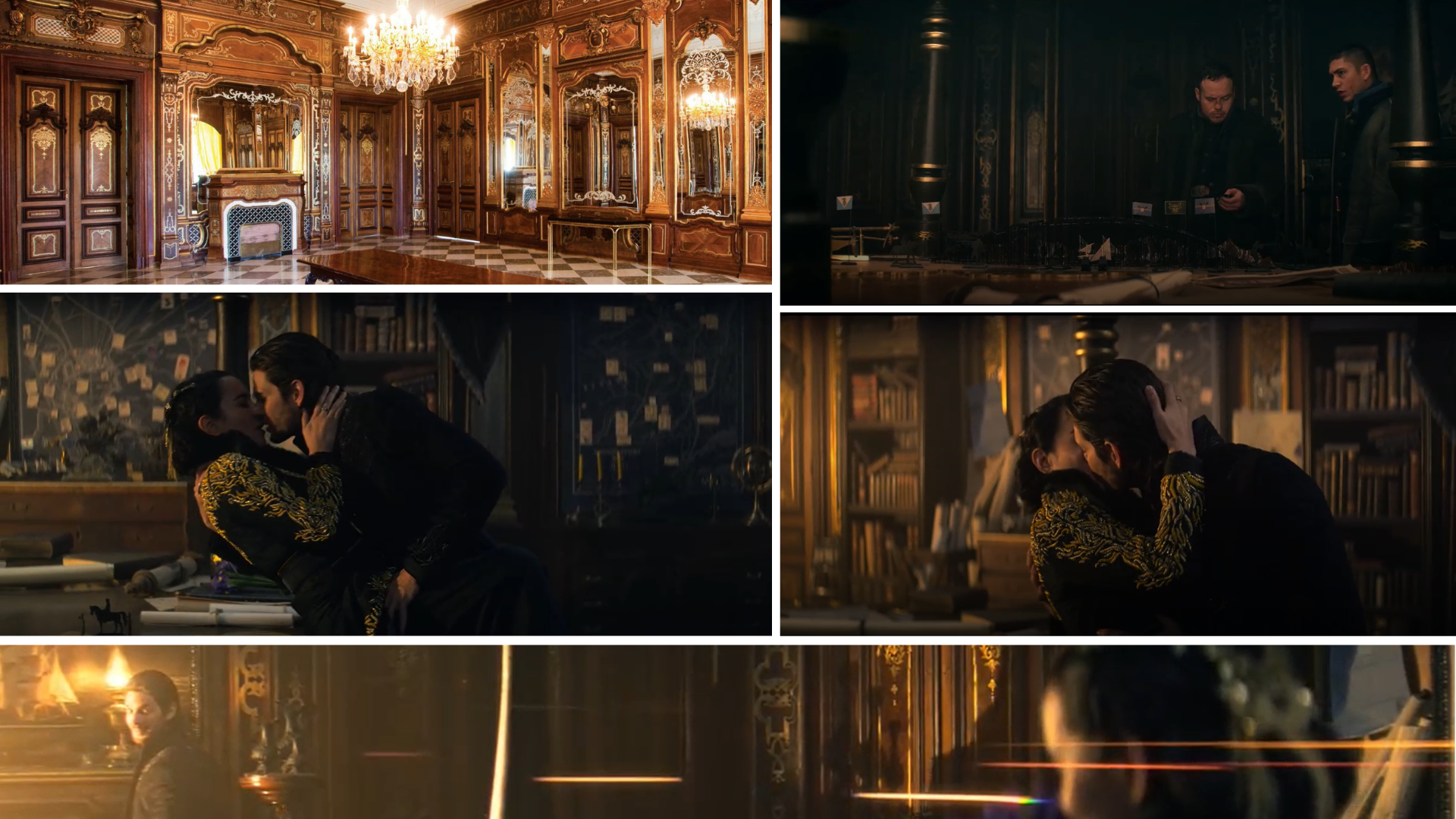 The Royal Castle of Gödöllő, Grassalkovich Palace provided the Little Palace’s stables. In Episode 5, “Show Me Who You Are”, Jesper finds the groom he flirted with earlier at this place. The church sequence where Inej defeats Pavel was also filmed in the Royal Palace of Gödöllő’s Baroque Chapel. 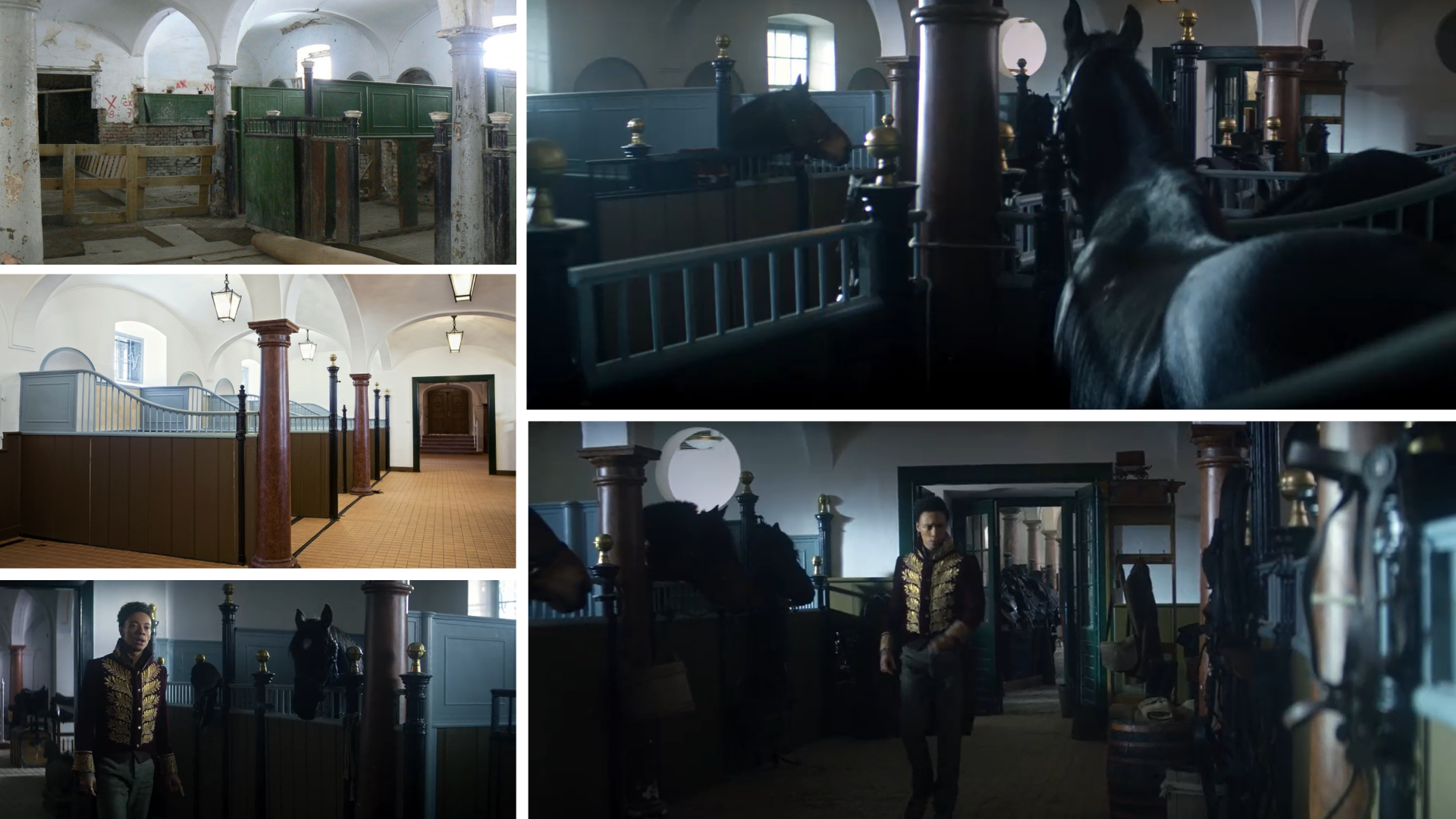 The village in ruins north of Chernast from episode four, Otkazat’sya, was filmed at the Szentendre Skanzen Village Museum, an open-air museum, situated only 20 miles north of Budapest. As you can see, the windmill and the houses were CGI’d in post-production to reflect the destruction of the conflict. 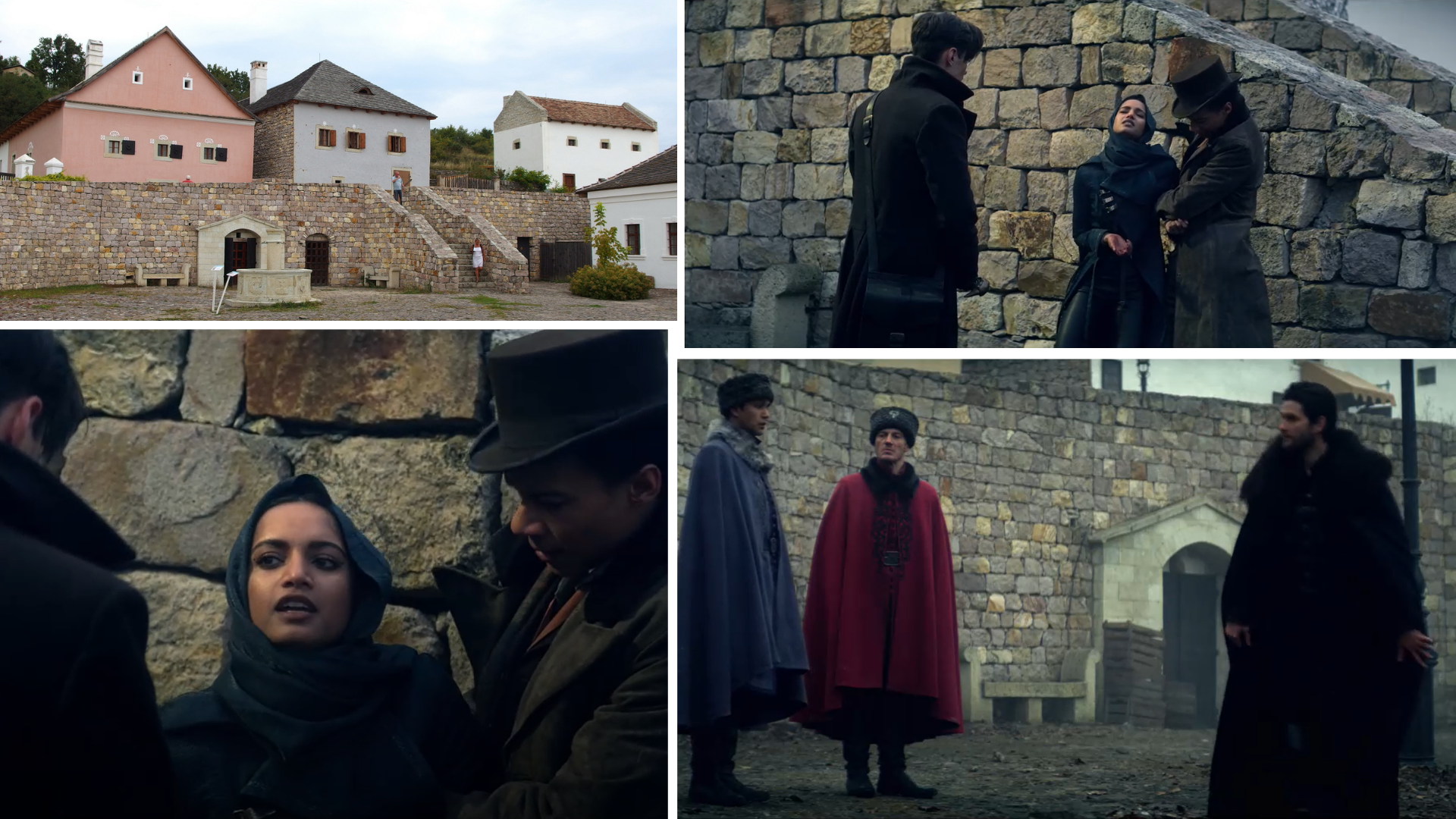 Mal visits this location in Episode 4, “Otkazat’sya”, when General Kirigan sends Mal and a band of First Army troops north of Chernast. And this was where Kirigan’s carriage stops during Alina’s research, which is later stolen by the crows.

Fantasy fans might have recognized the windmill from another series (though “Shadow and Bone” has given it a make-under to provide war damage). “The Witcher” and “Shadow and Bone” share the same studio, but their distinct aesthetics mean there’s not many overlaps in filming locations. 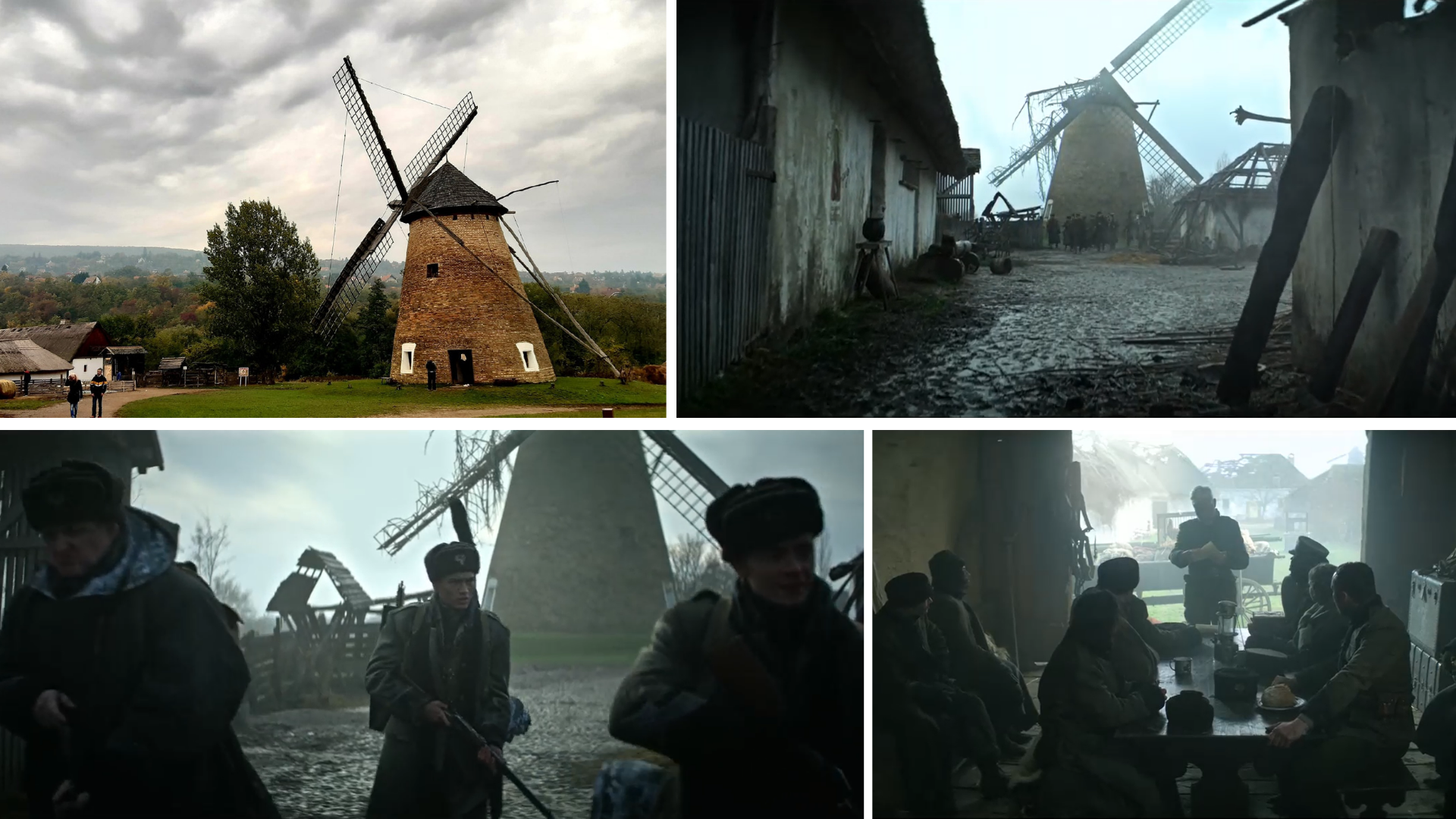 The full list of Shadow and Bones’ filming locations are here: