782
VIEWS
Share on FacebookShare on TwitterShare on LinkedIn
ADVERTISEMENT

In 1984, James Cameron directed a unique sci-fi thriller. The action-packed premise featured an unstoppable robot from the future who has traveled back in time to slaughter the struggling Sarah Connor (Linda Hamilton).

She holds the hope for the future and it was up to the time-traveling soldier Kyle Reese to save both Sarah and the future. The film was an intense and thrilling picture of great action but also for featuring Arnold Schwarzenegger in his most notable role as the cyborg assassin. Though the assassin was crushed to death by the end of the film, this would not be the last we would see of The Terminator, both as a movie and character.

Cameron had come a long way since 1984 and stepped up his special effects game for 1991’s “Terminator 2: Judgment Day”. He’d been working on such big blockbusters as “Aliens” (1986) and “The Abyss” (1989), both of which pushed practical and digital effects forward in big ways. 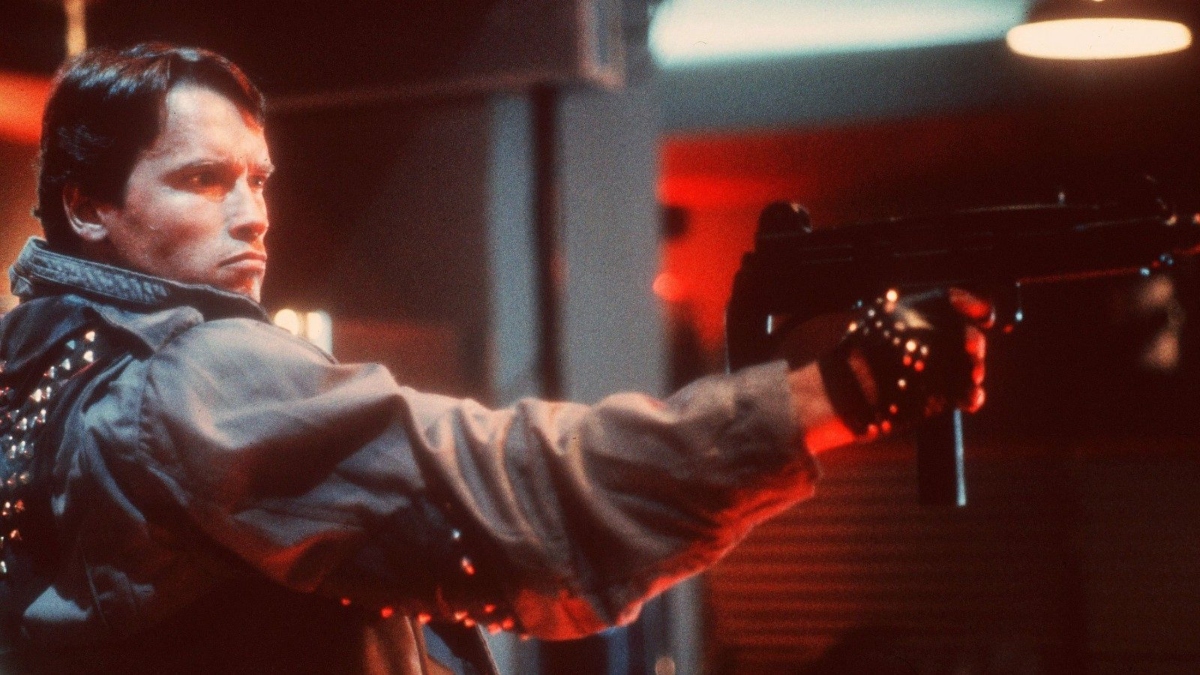 For his return to “Terminator”, the special effects were so astounding that it made the first film look quaint. The tale follows Sarah Connor (once again played by Linda Hamilton) having her child with John Connor (Edward Furlong), the boy who would grow up to lead a revolution against the rise of the machines. When Sarah is locked up, however, the task of protecting John falls towards the T-800, the returning assassin once again played by Arnold Schwarzenegger.

Now as a reprogrammed hero, he’s John’s only hope against the transforming machine of the T-1000, a robot that can transform into liquid, played with a straightface of evil by Robert Patrick. Only with the combined forces of Sarah, John, and the T-800 will the future have a chance of stopping the Skynet machines of Cyberdyne Systems from bringing about the end of humanity. 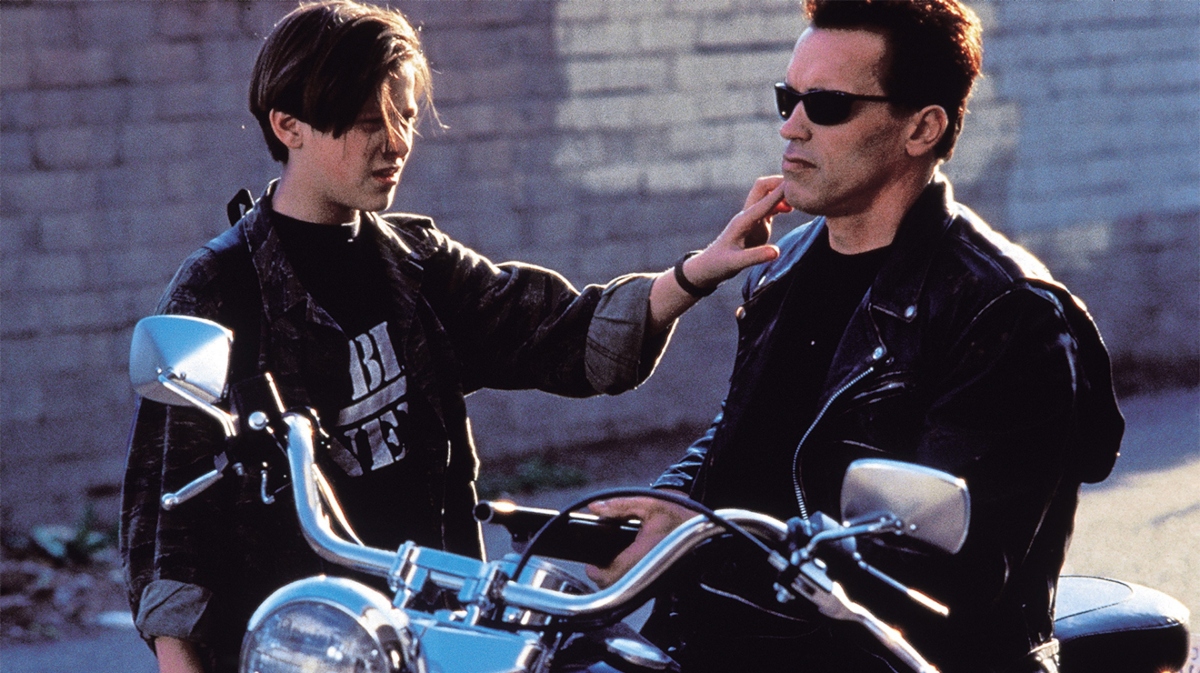 The film was a huge success, becoming a box office winner for ranking in over half a billion dollars worldwide. The amazing melding of computer graphics into the narrative, specifically the reflective nature of the T-1000’s liquid form, did not go unnoticed. The film would be nominated for the Academy Awards of Best Visual Effects, as well as Best Sound Effects Editing, Best Sound, and Best Makeup.

It would seem that after such a success that Cameron would pursue a sequel but he had other projects in mind. He jumped into more original movie ideas, such as the action-spy romp “True Lies” (1994) and the historical epic of “Titanic” (1997), which became both an awards darling and box office record-breaker. Though Cameron wouldn’t continue with Terminator as bigger projects were on the horizon, including grand vision for the sci-fi adventure “Avatar” (2009), the franchise would continue without him. 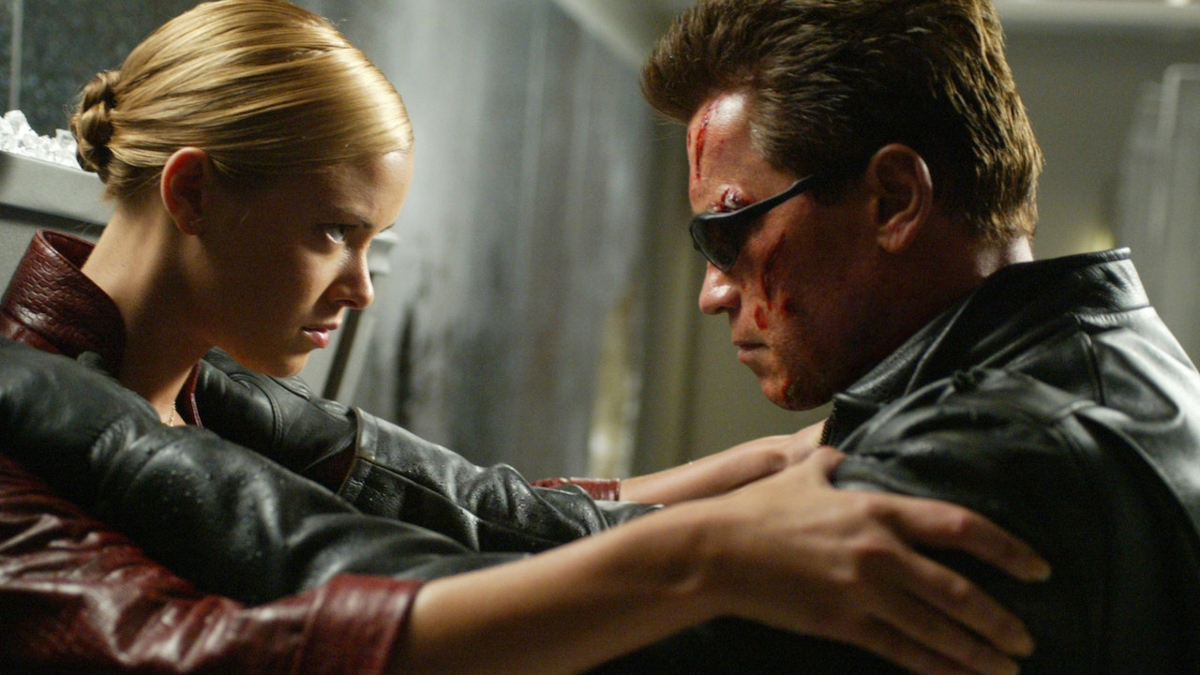 In 2003, Warner Bros released “Terminator 3: Rise of the Machines”, directed by Jonathan Mostow (“Breakdown”, “U-571”) with a script by John Brancato and Michael Ferris (“The Net”, “The Game”). This sequel would focus specifically on John Connor as he enters adulthood, though Edward Furlong would not return to the role as John would now be played by Nick Stahl. Arnold Schwarzenegger would be the only returning cast member of the previous films, once again posed as the time-traveling cyborg committed to helping John.

This time around, the apocalypse is back on as Skynet’s destruction of the world was merely postponed by the last film and not halted. To stop this new threat, John and the T-800 must now handle the T-X, a silent female Terminator with better durability, played by Kristanna Loken. Unlike the other films, Judgment Day is not averted by the end of the film as John finds himself now the leader of a revolution in the war of man versus machines.

Despite receiving highly mixed reviews, the film still maintained some of its hallmarks. Arnold still had his dry wit, the action was still intense, the specials were still top notch for coming from Industrial Light & Magic and Stan Winston, and the box office was still pretty high, even for such an expensive budget.

Fans wouldn’t have to wait another ten years for a Terminator sequel, however, as it didn’t take long for Warner Bros to get working on the next movie. In fact, in between this brief break was the Terminator TV series, “The Sarah Connor Chronicles”, which lasted a few seasons on Fox. By 2009, Warner Bros, with the help of The Halcyon Company, released “Terminator Salvation” (2009). 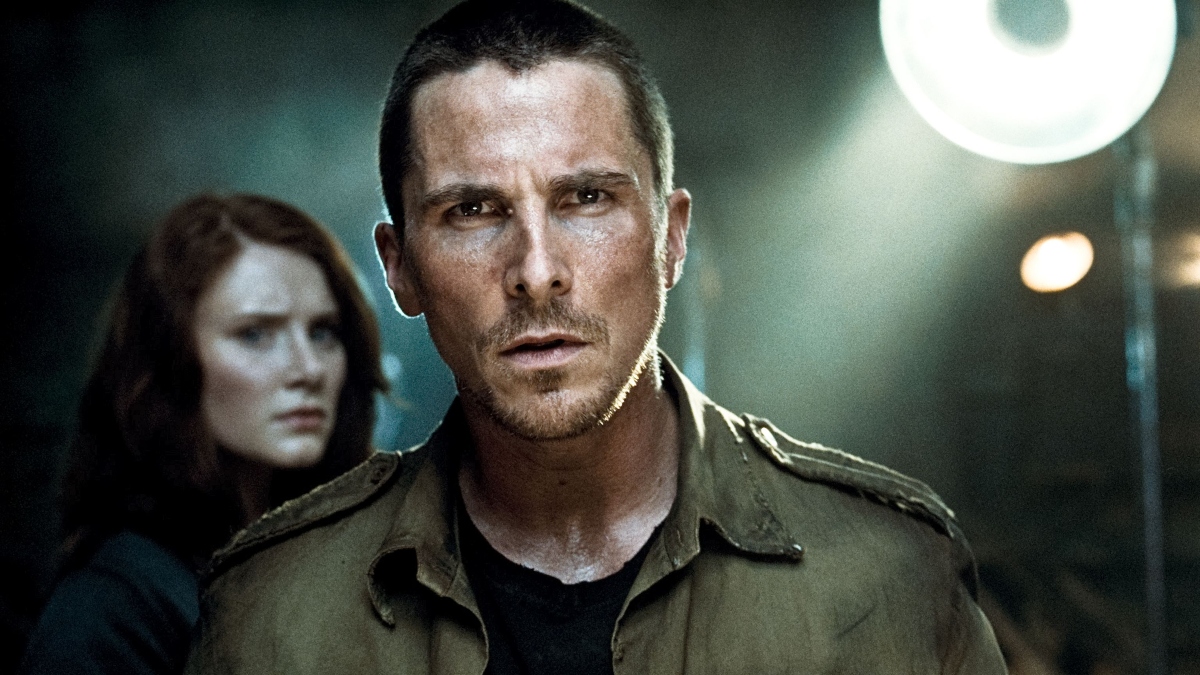 Directed by McG (“Charlie’s Angels”) with a script once more by John Brancato and Michael Ferris, this film didn’t just talk about the apocalypse but took place during the futuristic war. The film follows a weary John Connor (Christian Bale), struggling to free humanity from the genocidal machines of Skynet. His mission takes on greater importance when he unearths a sleeper Skynet agent of Marcus Wright (Sam Worthington) and finds a young Kyle Reese (Anton Yelchin), the man who will eventually protect Sarah Connor in the past.

For being set so far in the future, there were no returning cast members, unless you count the computer-generated Schwarzenegger who shows up as a T-800 by the finale. While the filmmakers had considered shooting in Budapest, they ultimately went with New Mexico for staging the apocalyptic settings. Though incredibly darker and divergent from past Terminator films, this picture wasn’t as much of a box office success.

Though Salvation wasn’t quite the big hit expected of a Terminator movie, there was only a six year weight for Warner Bros to attempt a reboot of sorts. In 2015, the film “Terminator Genisys” hit theaters and more or less went back to the way Terminator used to be, albeit even more complicated with its fluctuating timeline. Directed by Alan Taylor (“Thor: The Dark World”), the script by Laeta Kalogridis and Patrick Lussier would jump all around in time. 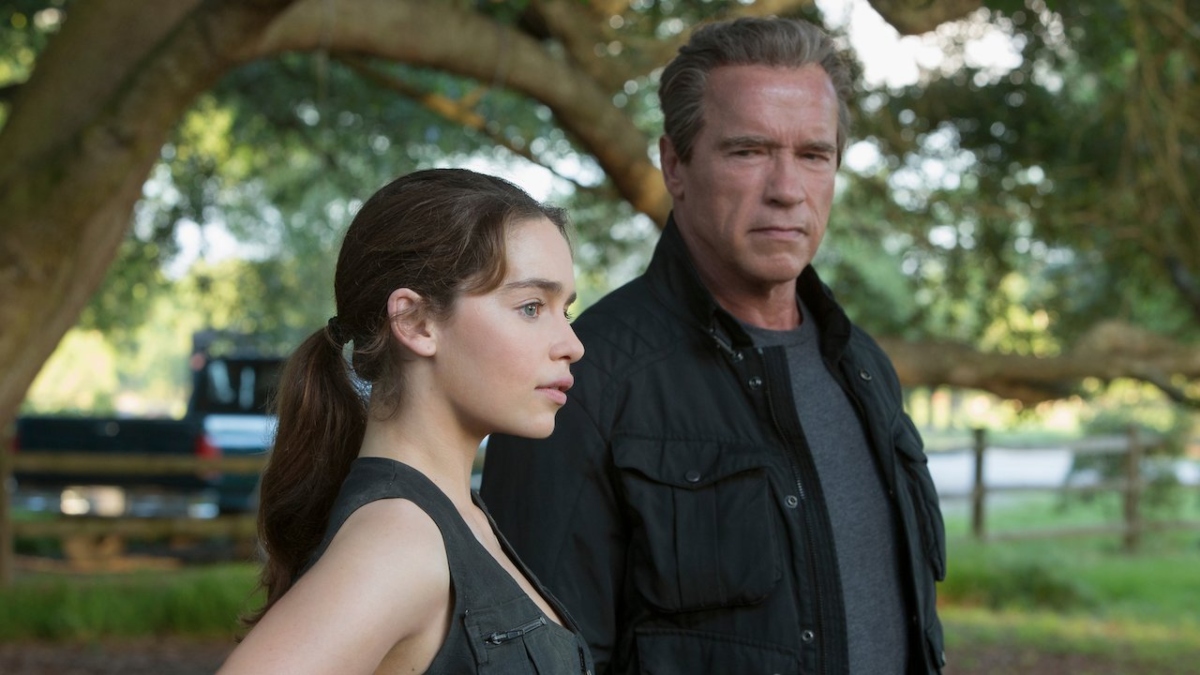 In the dystopian future of 2029, John Connor (Jason Clarke) finds a time machine and sends Kyle Reese (Jai Courtney) back in time to stop the war of machines. Through a complicated series of travels throughout time, Kyle ends up teaming up with Sarah Connor (Emilia Clarke) and a variant version of the T-800 (Arnold Schwarzenegger) to stop both the T-5000 (Matt Smith) and the T-3000, disguised as John Connor.

This confusing sequel played fast and loose with the timeline while still featuring some big action sequences, including a destructive car chase and a massive explosion. Filming took place in Los Angeles to keep with the modern setting, despite being set slightly ahead in the future for most of the picture. Once again, the film was a moderate but not a great success at the box office. It also received a wealth of negative reviews for being such a baffling picture.

The latest Terminator film to be made was “Terminator: Dark Fate” (2019), directed by Tim Miller (“Deadpool”), and it’s yet another film to rewrite the timeline and the story structure. It was a bit of a soft-sequel considering it featured a new character trying to avoid the machines of the future with the Mexican girl Dani Ramo (Natalia Reyes) but she receives help from an aged Sarah Connor, reprised by Linda Hamilton for the first time since 1991’s Terminator 2. 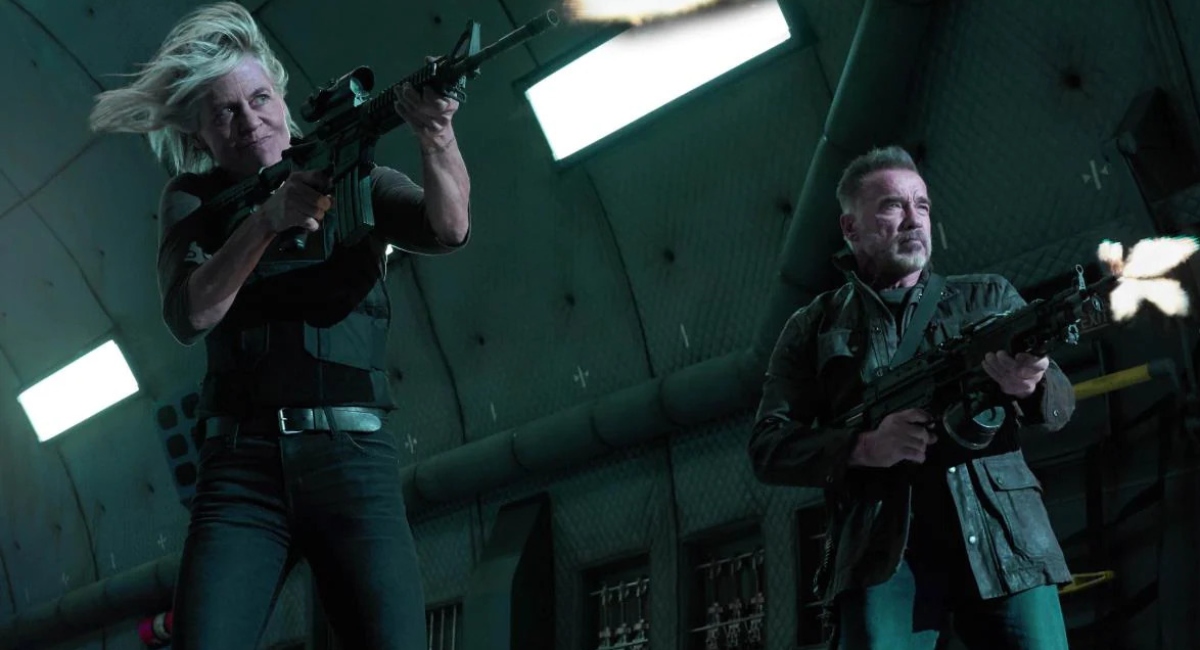 They need to avoid the assassin Rev-9 (Gabriel Luna) while receiving help from the good cyborg Grace (Mackenzie Davis). Of course, Arnold would once more return to the Terminator saga because you just can’t have a Terminator movie without him apparently. Taking place between Mexico and Texas, the filming would take place across Hungary (in Origo Film Studios), the United Kingdom, Spain, and Mexico. Even though this Terminator entry was better received by critics, it was only a mild box office success.

What will be next for the Terminator franchise? Currently, Skydance and Production I.G. are working on a Terminator anime series for Netflix, with Mattson Tomlin serving as showrunner. In terms of another movie, however, it remains to be seen whether the timeline of Dark Fate will continue or be rebooted yet again.