On the Quiet – METU film review

On the Quiet - METU film review

500
VIEWS
Share on FacebookShare on TwitterShare on LinkedIn
ADVERTISEMENT

Can it be misunderstood? The film that tells the most by not solving anything.

“On the Quiet” revolves around the serious and very current issue of sexual abuse. At the same time, it captures an important aspect of these cases: the ‘silence’ that almost always mutes them.

The plot centres around a music teacher, his class, and his students. The conflict emerges when Nóri, the freshman cellist girl, tells Dávid, the first violinist, that their teacher, Mr. Frici, was doing “intimate things” with her. It is an interesting dramaturgical technique when we see Mr. Frici deciding to start the concert very quietly – and then the infernal waltz begin. Of course, this effect is more for the viewer, it does not affect the plot.

It is essential to stress that sexual abuse is not a 21st century phenomenon, but it is a positive truth that it has become an important element of the social debate today. The #metoo campaign has almost become historic, giving victims the courage to speak out publicly and demand long-delayed justice. During the movement, several well-known people were found to have abuse their authority and influence – there are numerous examples, both national (see Pál Sipos, creator of the Epipo camp) and international (see Jeffrey Epstein), that have been widely publicised. Documentaries have been made regarding the phenomenon. It is customary to remark that a public dialogue on the subject has begun, however, there are still cases where no account is being taken. 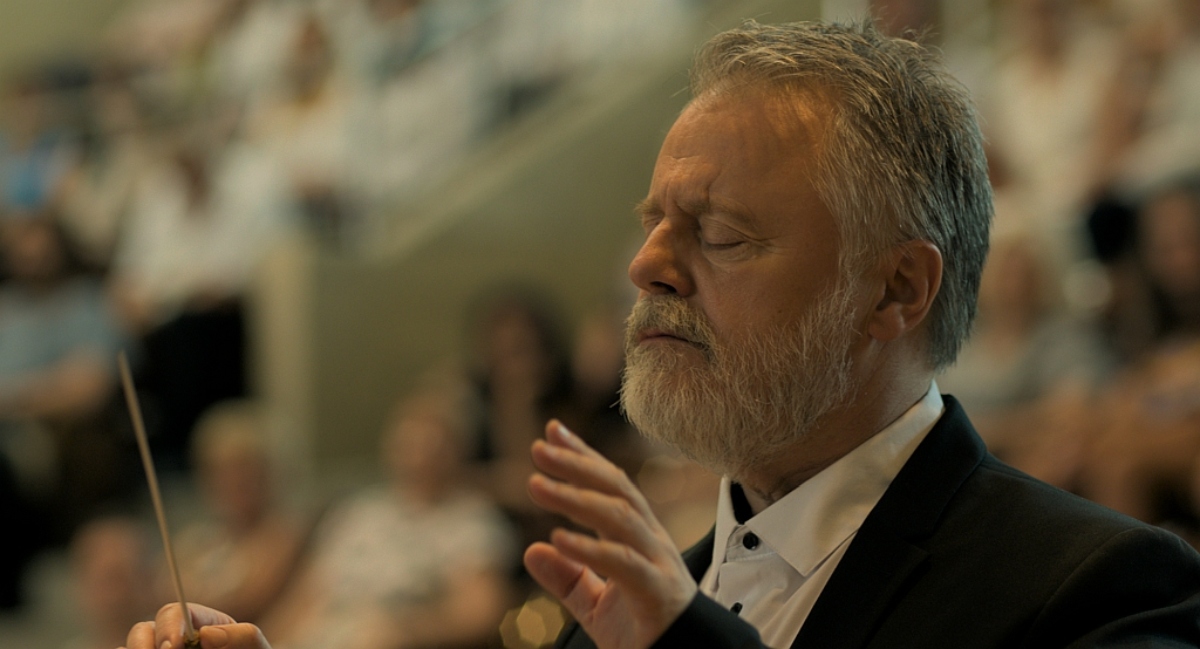 Máté Gábor plays “Frici”From the start of the “On the Quiet”, it is clear that Mr. Frici, the music teacher, instructs in an easy-going manner, without rigor or punishment. Furthermore, he has a more intimate and private relationship with his students than one would expect from a typical teacher-student relationship. In addition to verbal engagement, he makes physical contact with his pupils, whether it is a hug, shoulder massage, or playing air violin.

I would use a specific scene as an example, in which Nóri is being corrected on how to hold the instrument. The lay viewer may not be able to tell whether these methods are needed during instrument learning or whether the teacher does more than he should. From the point of view of the film, I believe the orchestra and the learning of an instrument was a great choice, as this activity is not only theoretical but also physical and practical.

Where does the uncertainty begin? Nóri reads her own writing to Mr. Frici. The text most closely resembles a love confession, which is quite misleading: in fact, Nóri’s mimics can be misleading – as if she were revealing her feelings to the teacher. Or is she not? The film constantly presents situations and dialogues that can be interpreted in a variety of ways. But we remain cut off from the unfolding of the events. Perhaps it is just a normal, a bit more personal teacher-student relationship within the appropriate boundaries. Or on the contrary – is Mr. Frici having an inappropriate relationship with his students?

The lines and the acting do not help the clairvoyance as the actors repeatedly contradict themselves and the situations. In support, I would like to choose the scene when Nóri first encounters the music teacher. Nóri’s words and actions suggest jealousy when Mr. Frici appears to be more concerned with the other girl in the room.

Could we conclude from this that Nóri deceived Mr. Frici only out of jealousy? Everything appears ambiguous. Perhaps one of the film’s key phrases is the following: “he did intimate things”. What is intimate? Compared to what? According to whom? Where is the line between intimate and non-intimate? Who considers what intimate?

There is an absolute starting point: a teacher, or even an adult, should never touch or address an underage “like that.” But it is not so black and white, and that is what the film wants to convey: one can consider a simple hug as harassment. This relativeness makes this situation very complicated and uncertain. One of the difficulties of truth is that it is easy to slander, as in some cases it is difficult to prove otherwise.

I would also like to highlight the scene when Dávid and his girlfriend are listening to the audio recording. The words and instructions are very ambiguous, the reason for this may be that getting to know the instrument is a “fine” and “intimate” activity. “Gently move your hand,” instructs Mr. Frici. Here, it may be important to examine the motivation for Dávid’s investigation. The boy tries to stand by the girl by several means and prove that Mr. Frici is guilty.

Does he do this because the teacher deprived him of the opportunity to play the violin at a time when an important person would have listened to his playing? That is, he practically took away his career opportunity from him. Could the boy be seeking vengeance or satisfaction? There is a hint that Dávid considers situations as “harassments” that have happened to them, such as air violining. Mr. Frici treated them the same way he treated Nóri. Or did he not?

The film also highlights a very important circumstance associated with these tragic stories. Namely, the attitude, that is, that we will do things in a nice silence . Even the statement is grotesque in the context of the film: nice versus silence – where silence means concealing sin, what does nice mean? The principal, who ultimately represents the school, is opposed to the case being made public. In this case as well, the institution, which is primarily for the benefit of students, is only concerned with its own interests.

In addition to the silence of disguise, there is another kind of silence: the silence of shame and the silence of suppression. It is often the case that victims do not dare to comment on what has happened and remain silent for decades. A sad consequence of this is that sinners receive their just penalty only years later, if at all. A teacher has a great deal of influence, authority, and power over students, which may be a morally aggravating circumstance.

For a student, especially when it comes to musicians, their career may depend on it so it is possible that many would prefer not to speak in public so as not to jeopardize their future chances. In terms of selfishness or egotism, it may be important to mention Nóri’s mother. Zsuzsa virtually acts as if she is more concerned by the the inconvenience of the whole situation than by the harassment itself. Her first reaction is that no such thing happened to her daughter, no one made a pass at her.

We may wonder as to why music, or more specifically, an orchestra appears in the film. There must be some connection between silence in music and the silence expressed in the film. When we listen to music, we know that it is happening now, but when there is silence, we are left to ourselves. It exists and but it doesn’t. It is maddening because we have no control over it. What happens here is silence itself in the abstract world of music. A silence that makes us feel insecure, that makes us confused about what is happening.

From a technical point of view, I would like to highlight two scenes. One is when Nóri first tells Mr. Frici not to treat her intimately. We see the girl talking in front of her and the teacher behind her, vaguely in the background. That is, the two speakers appear at once, yet we can only watch one reaction. This comes back once again when Mr. Frici talks to the school principal: there are a few seconds here when the teacher’s reflection is blurred in the mirror. What does this imply? Perhaps the ambiguous truth that lies behind the motivations, intentions and words?

In terms of form, the film also does an excellent job at creating a stifling and tension-filled atmosphere. The colouring is rather cold and desaturated. The settings are rather static, but if there is movement, it is slow and fine. In addition, narrow image clippings, which emphasise a single detail, are common, bringing us closer to the events.

The anger, pain and emotional reactions of the characters can be observed up close. The final family dinner scene at Mr. Frici’s home showcases several key elements. Here is what the music teacher says in the title statement of the film: we are doing it on the quiet, in a consolidated fashion. To avoid scandal and publicity, finally resulting in the just punishment, is a consolidated solution? Mr. Frici may have done nothing, but his attitude is unforgivable.

The comment to underline: the girl longed for attention and the teacher misunderstood her approach. This can be seen as Mr. Frici’s explanation. What kind of approach? What can a teacher misunderstand so that the laws on harassment are clear? Again, this is just a very floating and vague wording that cannot be used as a justification or explanation. Dávid confronts Mr. Frici in front of his family about what he did and his knowledge of it, using a skilful pull and not stating the name.

We viewers also take a seat at the table through the wife’s character. We are perplexed, unable see through the tangled contradictions and peculiar interpretations to understand what has happened. However, it is very interesting that the word molestation is only uttered here, the very end of the film – so far there has only been a reference to it.

This film is for those of us who, as outsiders, remain in the uncertainty of silence. It perfectly depicts the suffocating, uneasy atmosphere that can develop around these cases. As spectators, we experience the same anger as if we had read about similar cases in the media. The film has more questions than answers, and that is its real strength. There is no catharsis, no solution, the case is not over with the end.

It is a great closing scene when Mr. Frici’s wife gently caresses Dávid’s face, much like Mr. Frici did with Nóri…

This film is for those of us who, as outsiders, remain in the uncertainty of silence. It perfectly depicts the suffocating, uneasy atmosphere that can develop around these cases. As spectators, we experience the same anger as if we had read about similar cases in the media. The film has more questions than answers, and that is its real strength. There is no catharsis, no solution, the case is not over with the end.