132
VIEWS
Share on FacebookShare on TwitterShare on LinkedIn
ADVERTISEMENT

Most of the world has changed this past year, including the way how we consume entertainment. Moving away from the movie theaters, it seems like the silver screen can now be found in the living room of every home in the world. This, of course, offers a golden opportunity for the volatile world of streaming services.

With 2021 now coming to an end, the Streaming War rages on, as the usual suspects in the world of home media streaming ready their guns for Halloween supremacy. Considering that now’s the best time for watching some old B-movies, or some new horror anthology series, the battle for the title of number one streaming service seems to be heating up. 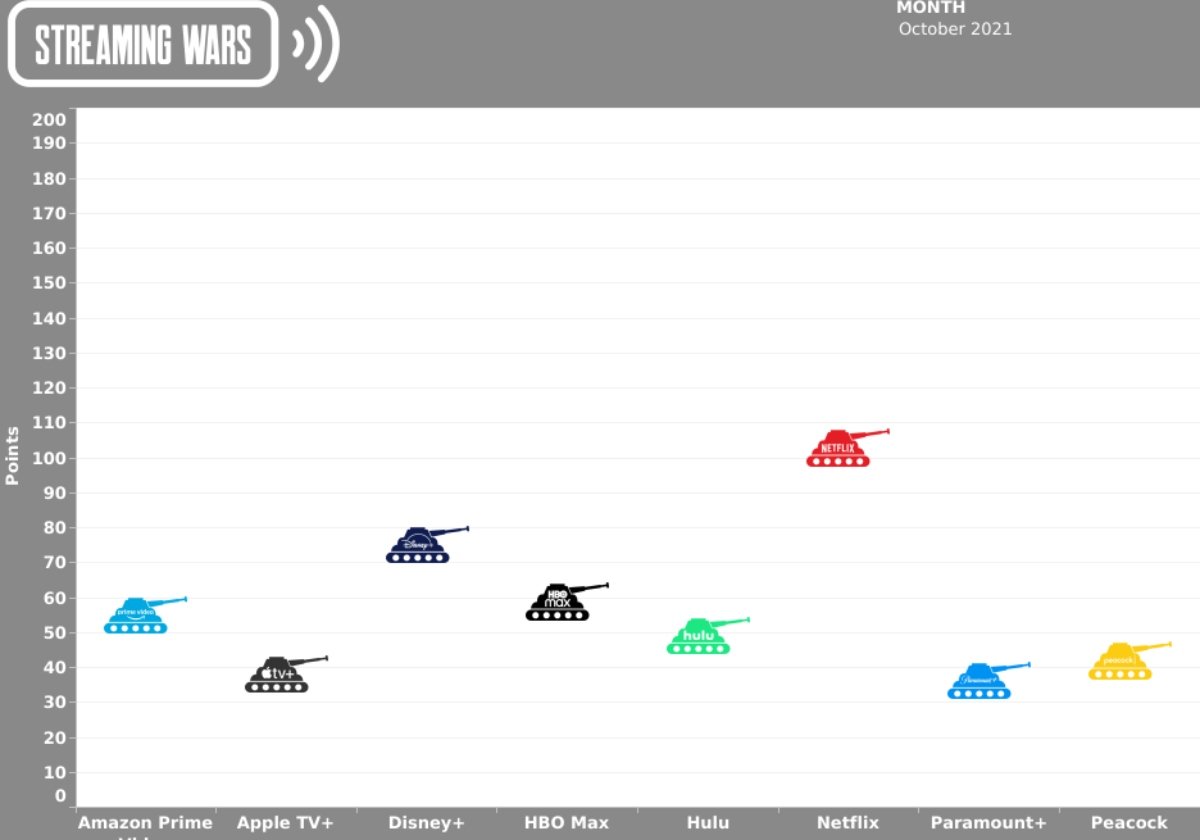 Just a year ago, in early 2020, it seemed like this was a competition between Netflix and Amazon Prime Video, with the rest of the streaming services being relegated to a distant third place. That is, however, until Disney+ proved that there was still room in this war for newcomers – especially if said newcomers have a solid library to back them up.

Surprisingly, Disney+ has overtaken the competition in terms of original – and quality – content, standing just behind Netflix in terms of new releases. That said, Disney+ seems to be saving up the big reveals for later this year, as its new offerings seem to be somewhat tame compared to what we got the rest of the year.

Coming from a year that saw “WandaVision”, “The Falcon and the Winter Soldier”, and “Loki”, Disney+ seems eager to please both Marvel and “Star Wars” fans. The platform appears to be done with its live-action Marvel original shows – for now, – opting instead for releasing the animated anthology series “What If…?”.

Additionally, this October also see the release of “Star Wars: Visions”, which is another animated anthology series. While these might be great news for long-time fans of both franchises, it leaves something to be desired for those wanting some more original Disney+ programming.

Netflix, however, has seemingly embraced the spirit of Halloween in spectacular fashion. In past years, the streaming titan has counted on “Stranger Things” to boost its October numbers, but the show is nowhere to be seen this year.

However, we got the amazing “Midnight Mass” to fulfill our horror needs. Created by Mike Flanagan (who also worked on the brilliant “The Haunting” series,) “Midnight Mass” is a properly spooky delight: just the kind of show that every Halloween needs. Netflix’s killing show for the month is, without a doubt, “Squid Game”.

The Korean thriller has taken social media by storm with an endless flood of memes and viral posts. This show alone has made Netflix the undisputed winner of the streaming war of the month, proving once again that the streaming titan offers a solid library of international original titles.

Speaking of international shows: fans of the Spanish series “Money Heist” will be happy to hear that the first part of the show’s final season is now available on Netflix. While not horror-themed, there’s little doubt that “Money Heist” is one of the most popular series the platform has to offer.

The Rise of HBO Max, and the Fall of Amazon Prime Video

Following a strong summer thanks to the release of “The Tomorrow War”, things seem to be losing steam back in old Amazon Prime Video. The platform has been known to house a ton of quality content from a variety of sources, even if it has precious little when it comes to original programming.

Though it began the year strong thanks to the comic book show “Invincible”, Amazon Prime Video now offers just its original take on the “Cinderella” story for this October. The month’s spookiness appears to be conspicuously missing from Prime Video – unless you count the disappointing reviews that 2021’s “Cinderella” has been getting as a horror story.

While it appears like Prime Video might be struggling to deliver quality original content, HBO Max has been absolutely flawless in that field. After last month’s “The Suicide Squad” proved to be a massive streaming success, the young platform now delivers two solid original films to further strengthen its library.

First off, we have the horror film “Malignant”. Directed by James Wan of “The Conjuring” fame, the movie follows a woman that has the ability to perceive when strangers are about to be killed. She decides to act upon these premonitions, turning the movie into a cool mix of a horror film and a supernatural thriller.

Another new original movie coming to HBO Max this October is “Cry Macho”, directed by and starring Clint Eastwood. The veteran actor and filmmaker proves that he’s still got it with this Western drama, even if age has mellowed him quite a bit. Fans of slower-paced films might appreciate this intimate and finely crafted story – and Eastwood is just as great as he’s ever being as the lead actor.

Fight to the Top

Sure, names like Netflix, Disney+, and HBO Max might now be industry leads, but there are far more streaming services available to choose from – and they all want a bigger piece of the streaming pie.

Hulu is a well-established streaming platform with solid programming that mostly encompasses classic Fox shows. When Disney purchased Fox and released its own streaming platform, however, Hulu suddenly found itself in an awkward situation. This October, the platform offers new episodes of “The Simpsons” and “Bob’s Burgers”.

Reality TV fans will be pleased to hear that Hulu is adding new seasons of classic ABS shows like “Shark Tank” and “Saturday Night Live”. Other than that, there’s very little to see in Hulu this month.

Apple’s streaming platform, Apple TV+, has been making waves recently. After the high-profile release of “The Foundation” in late September, October promises to bring new episodes of Ted Lasso, a comedy show that’s been steadily gaining popularity as a possible successor to shows like “The Office”.

Finally, we have Peacock and Paramount+. When it comes to Paramount’s streaming service, things have been slow for original content. Fans of Madonna might be delighted to hear that “Madame X”, a musical documentary starring one of the most important pop icons in music history.

Other than that, horror fans will no doubt love that the new “Paranormal Activity” film will be releasing exclusively on Paramount+ this month. Coming to the platform on October 29th (just in time for Halloween!) “Paranormal Activity: Next of Kin” continues the long-running series of found-footage scares and shaky camera encounters.

Peacock, NBC Universal’s streaming platform, is also getting a share of the Halloween action this October. Aside from releasing a ton of classic horror films like “Child’s Play”, “A Nightmare on Elm Street”, and “Friday the 13th”, the platform is getting ready to release “Halloween Kills” the same day it hits theaters.

Starring Jamie Lee Curtis, “Halloween Kills” is the latest installment in the legendary horror franchise about psychopathic killer Michael Myers. When the movie premieres this October 15th, we’ll finally know if Myers is dead for good, or if he will keep haunting cinema for another couple of decades more.