Jurassic World: Dominion marks the third entry of the Jurassic World trilogy and the sixth film of the Jurassic Park saga. The film contains a lot of familiar characters and tropes of the series including legacy actors Sam Neill, Laura Dern, and Jeff Goldblum. But the biggest stars are by far the dinosaurs.

Big or small, docile or violent, they’re more or less the reason this franchise has continued for so long to be a major blockbuster series.

It’s unique to note just how much this series has progressed over time. The original “Jurassic Park” from 1993 marked a major turning point in visual effects. Initially, director Steven Spielberg intended to go the practical route. The original dinosaurs were going to be assembled with puppetry and circuitry, albeit on a massive scale. It’s a technique that has served well for previous monster movies like “Aliens” and “Godzilla”. In fact, Spielberg had referenced Godzilla as an inspiration for the film.

But then ILM animators Mark Dippé and Steve Williams decided to pursue the computer graphics route by creating the dinosaurs. When Spielberg saw an animatic test of how the dinosaurs would work in this medium, it was advanced enough to convince Spielberg this was the route to take along with a combination of animatronics for the less elaborate sequences (such as the ill triceratops). Sure enough, the CG-created dinosaurs were a highlight of the picture. Everything from the speedy raptors to the towering T-rex made for some of the most iconic blockbuster cinema of the 1990s. 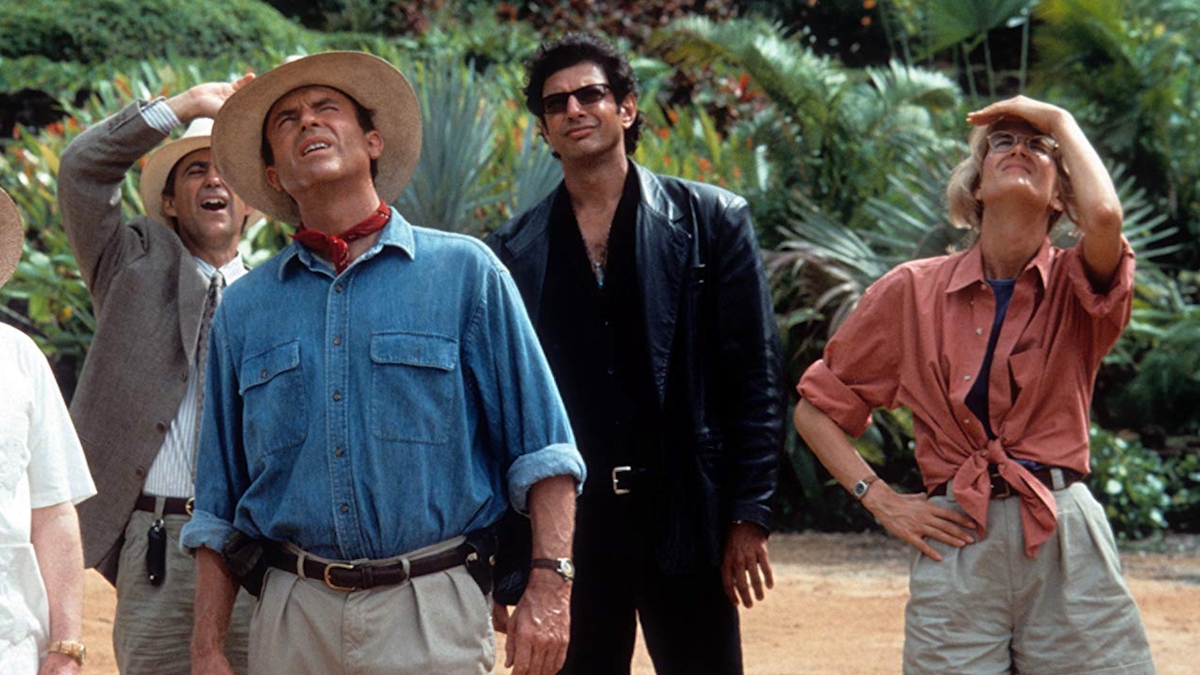 How could anyone forget the first film? A grouping of scientists is invited to witness the recreation of dinosaurs for a theme park. While initially mesmerized by the sights of prehistoric beasts walking among humans, the park is sabotaged and the few humans on the island try to find a way to escape and survive being some dinosaur’s dinner. Some of the iconic characters were the doctors of Ellie (Laura Dern), Alan (Sam Neill), and Ian (Jeff Goldblum). The big office led to the continuation of “The Lost World: Jurassic Park” (1997) and “Jurassic Park III” (2001).

“Jurassic World” arrived in 2015 as a soft sequel. It exists in the same world as Jurassic Park but with not as much learned. Now there’s a bigger park and it’s operational. Naturally, the park operations go awry and the humans flee once more from terror. There’s a new assortment of characters like the dino wrangler Owen (Chris Pratt) and the park operations manager Claire (Bryce Dallas Howard). 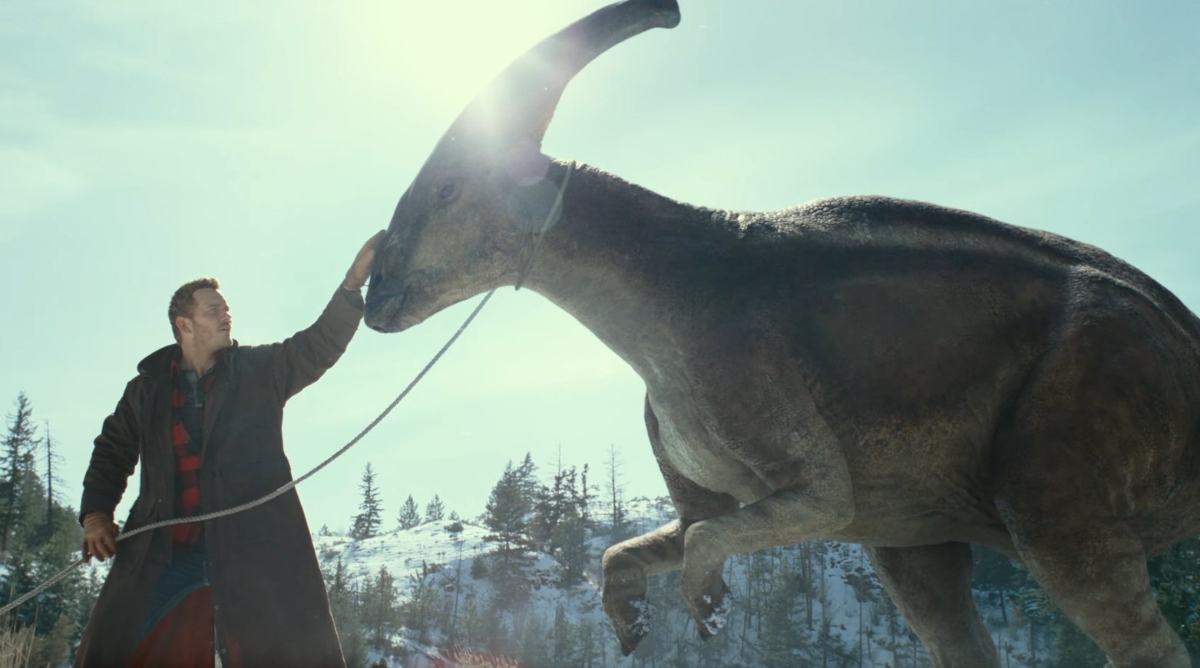 There were some new dinosaurs, both digitally created and with animatronics, some new grander sequences of chaos, and the same adventurous spirit. True to it predecessor, Jurassic World ended up being one of the highest-grossing films of 2015, which is no small feat for a year that saw the revival of Star Wars. Its success led to the 2018 sequel, “Jurassic World: Fallen Kingdom”, which also turned out to be a box office giant.

“Jurassic World: Dominion” combines the aspects of Jurassic Park and World into a crossover special of sorts. We got a taste of it in Fallen Kingdom when Goldblum briefly reprised his role as Ian to speak about the dangers of dinosaur cloning. Goldblum returns once more but works directly within the current corrupt organization of Biosyn. They’re in the business of taking advantage of the rampant dino-DNA available, abusing it for their own corporate gain.

The most interesting aspect of the film is how it poses a much different setting. Following the events of Fallen Kingdom, dinosaurs are now running abroad instead of being trapped in enclosed parks and islands. Humanity has to make a big shift in trying to get used to regular disasters of T-rex attacks and raptors in the woods munching on rabbits. 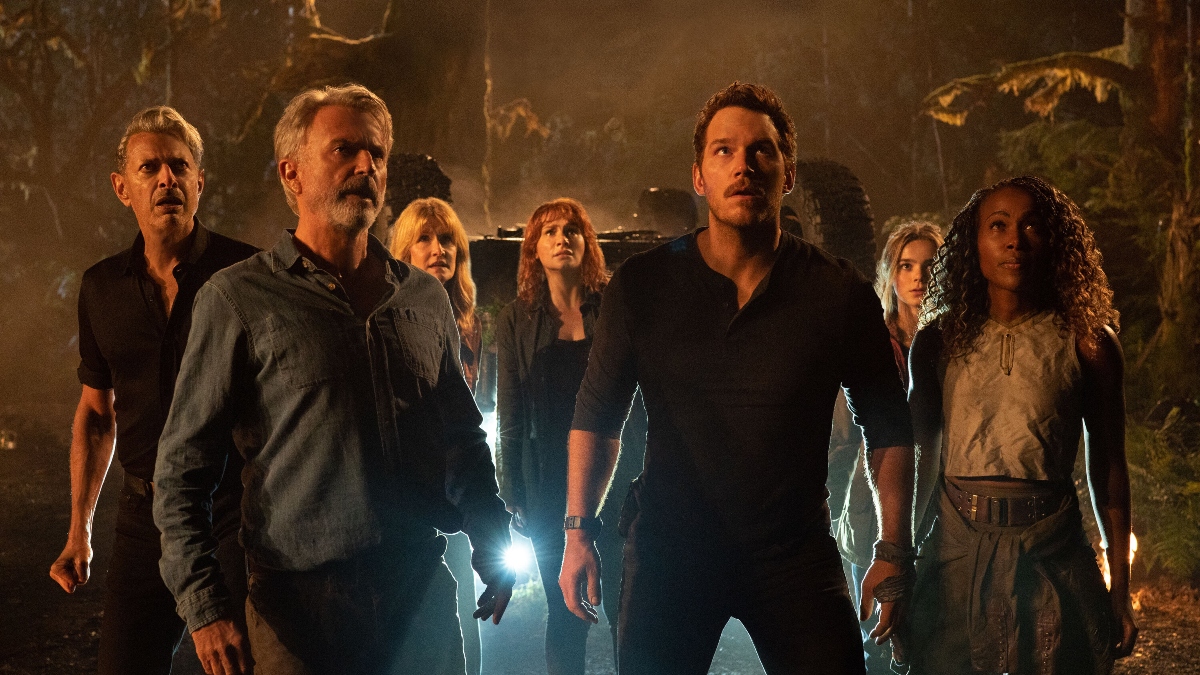 But the bigger issue seems to be Biosyn for their shady involvement in manipulating bugs. In addition to Ian investigating from the inside, the veteran scientists of Ellie and Alan return to go undercover for infiltrating Biosyn’s lab/preserve. They’ve been here before and such an adventure has all the familiar aspects; failing power, pursuing dinosaurs, greedy tyrants, and locked doors are all par for the course.

Also present are Owen and Claire, now trying to take care of the clone Maisie (Isabella Sermon) in addition to their regular dinosaur duties of wrangling and freeing. They become entangled in an adventure of rescuing Maise, infiltrating an illegal dinosaur selling operation, and eventually joining our legacy characters on their familiar adventure.

Even though 2015’s “Jurassic World” had loads of Easter eggs, Dominion goes the extra mile to appeal to its aging audience. Consider that those who saw the original Jurassic Park when they were kids are now adults and most likely taking their kids on such an adventure. There are little things to reference such as the shaving creme can containing dino DNA and Ian debating whether or not to undo his shirt just like he did in the first film. There are also familiar sights such as the final showdown of Therizinosaurus and Tyrannosaurus rex versus Giganotosaurus echoes the battle of two raptors versus the Tyrannosaurus rex of the first film. So, yes, even the Tyrannosaurus rex is a returning character who is still doing his thing. 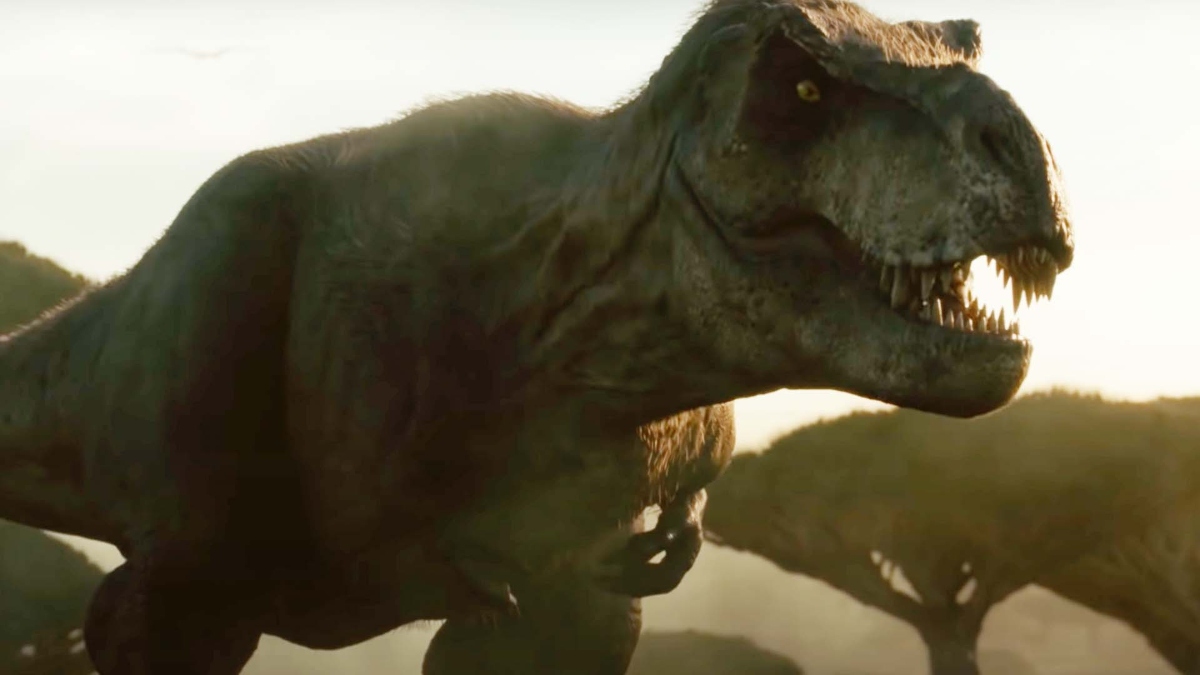 Dominion is the longest of the Jurassic World movies and sadly one of the least charismatic. There’s so much going on that there’s hardly a moment for the actors to get in a decent zinger or grow as characters. Even the newcomers of DeWanda Wise and Mamoudou Athie feel woefully underdeveloped, despite being the most unique additions to the cast.

There’s a very telling moment when Alan remarks to the rest of the central human characters during the grand finale of dinosaur fights that this isn’t about them. And it certainly seems that way with this franchise. After all, the real draw of these pictures is the dinosaurs. On that level, Dominion pretty much gives the summer crowd exactly what they’ve come to expect with this series.

As of this writing, Dominion has grossed $391 million worldwide on a budget of $185 million. So it’s likely that this franchise isn’t extinct yet. Dinosaurs just seem to be a great draw for movie crowds. But what of the next film? Well, it’s likely most of the same cast and crew won’t be returning.

The legacy characters are getting a bit old to be running from beasts and director Colin Trevorrow has stated he’ll be stepping away after directing two entries of Jurassic World. So it’s likely that there will be some new blood. One thing that you can count on, however, is the presence of more dinosaurs either battling each other or chowing down on humans. And with a whole world of dinosaurs living among humans, there’s plenty to work with for future films. Hopefully, they’ll expand far beyond just the standard park theatrics.

The legacy characters are getting a bit old to be running from beasts and director Colin Trevorrow has stated he’ll be stepping away after directing two entries of Jurassic World. So it’s likely that there will be some new blood. One thing that you can count on, however, is the presence of more dinosaurs either battling each other or chowing down on humans. And with a whole world of dinosaurs living among humans, there’s plenty to work with for future films. Hopefully, they’ll expand far beyond just the standard park theatrics.