134
VIEWS
Share on FacebookShare on TwitterShare on LinkedIn
ADVERTISEMENT

The producer of „Martfűi rém”, Gábor Ferenczy has been working on a project for several years about the first Hungarian handicapped Olympic Gold Medalist, even though back in the early 20th century, Paralympics didn’t exist. The movie is called: 42 Karcsapás (42 Strokes). Right now, it seems, that the long-awaited dream is about to finally come true. An interview with Gábor Ferenczy.

Gábor Ferenczy: “Well, we are still waiting for the „green light” from the people above at the production company. We hope, that we can make the movie, but we are still not sure. It’s in our plan, that is for sure.”

This film has been a long-awaited dream of yours. Why a Paralympian? Why him?

Gábor Ferenczy: “I was always interested in the so-called „Hungarian Heroes”. These people don’t have to be necessarily generals, war heroes, or anything else. These people can be sportsmen or people who have such high levels of humanity, that this attribute makes them hero already. I’ve read about Olivér Halassy in a Facebook post and I could only say: What a fantastic story this gentleman has! This man started as a footballer, a talented player, but at an early age, he had an accident with a tram, where he lost one of his legs. This happened almost a hundred years ago, maybe in 1919 or 1920. In these times, you couldn’t have a lot of opportunities if you don’t have legs. Not him. He learned to swim. He learned to swim really well. So good, that he won swimming competitions that were held in rivers and all sorts of waters.  He even started in two heats on the same day sometimes. He was an Olympic Champion in water polo. European Champion both in water polo and swimming. 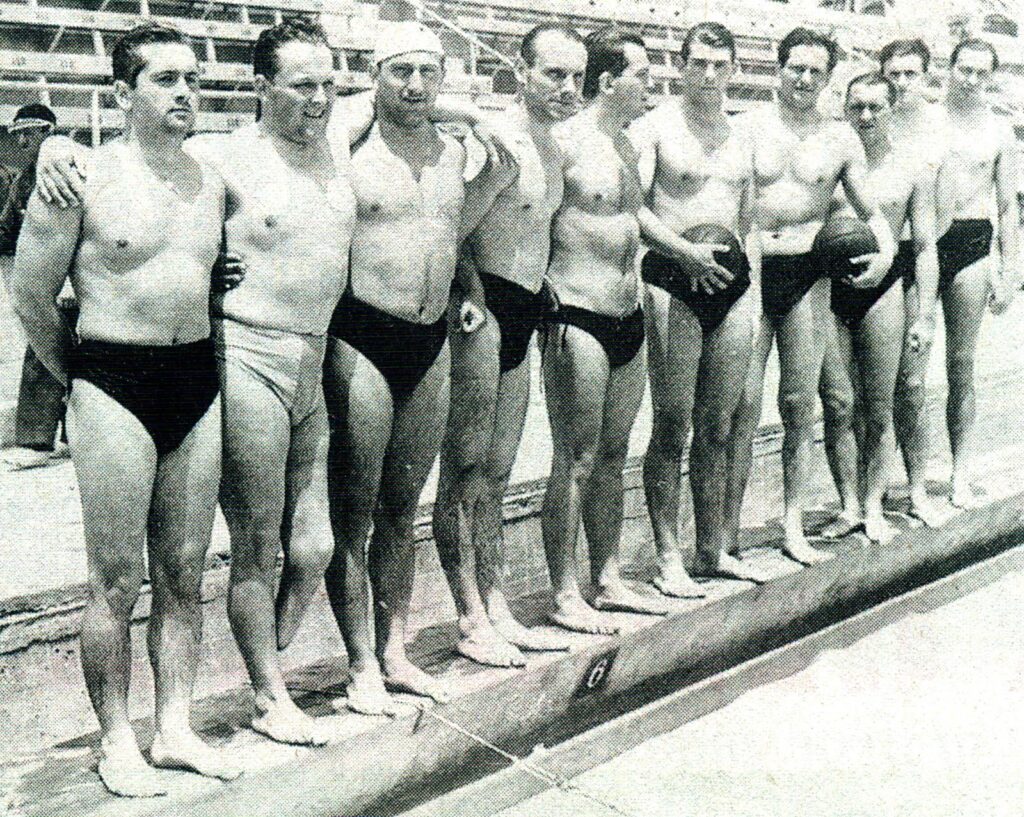 Now, these were such huge performances. These were unheard of before, especially from a handicapped kid. Another reason, why he was such a hero. In 44’ he dressed up in a Nyilas (Hungarian Fascist) uniform to save his Jewish teammates from death. He risked his own life to save his friends. Nowadays, you don’t hear a lot about Halassy. We are trying to change that. We have to show this to Hungary and the World. This is a story about courage, power, toughness. This story could give hope to a lot of people, who think, that there is no escape from their despair.”

Well, we could say that this is a real hero story then.

Gábor Ferenczy: “Absolutely! This is a hero story. Not only in sports but in life in general.”

Where did the title 42 Strokes came from?

Gábor Ferenczy: “The title came from the director. It will have meaning in the movie. Generally speaking, they say that it takes 42 strokes to get from one side of the pool to another. For me, it means fighting and willpower and I think we will be able to show that.”

Tell us, how you go about selecting a director? What are the qualities you look for?

Gábor Ferenczy: “Look, in this situation it was easy. I worked on „Martfűi Rém” (Strangled) with this director and crew. I wanted to work with this team. Ultimately, it is really good to work with someone whom you worked with before. You know their strengths, weaknesses. You know if you are on the same frequency or not. On the other hand, it depends on the topic of the movie. You cannot make a serious movie with someone, who is specialized in comedy. I like to work with Árpád (Sopsits Árpád) a lot. We won 9 awards out of 14. We didn’t have a lot of bad critics.”

Where are the shooting locations are going to be? Where are you going to shoot?

Gábor Ferenczy: “The main locations are in Budapest. One of the biggest scenes is going to be recorded at the closed Tungsgram Pool in Újpest. Since it is closed, we can use it pretty well. We are talking about a retro pool, we know that we don’t have to change it a lot. The place is much more authentic and meets the requirements of our ideas. Other than that, we are going to shoot at Oktogon, in various hotels such as the Grand Hotel on Margaret-Island. We will have a barracks scene, train scene, street scenes which we will record at Újpest as well. We were talking about going to the countryside to Tatabánya to record some authentic shots.”

Under COVID-19, how does the production of a movie looks like?

Gábor Ferenczy: “The production of the movie will start in the summer of 2021 if they allow it. After that, we have to create a production plan and we will continue on the production preparations. We have a lot of actors on our list, but the majority of them still don’t have their roles selected. So, these preparations could be done under the pandemic.”

Can we have some names? I mean, the main roles?

Gábor Ferenczy: “Well. Our female lead role will be Panka Kovács. That is certain. On our cast, we would like to have Péter Rudolf, Miklós H. Vecsei, Tamás Kovács, and so on. But, still. These are only just hopes until they allow us to film.”

How you set a deadline for a project and keep it on schedule? What are some strategies you use?

Gábor Ferenczy: “It is always difficult to keep shooting on schedule. It is the most expensive, unfortunately. Approximately, this movie has a 65 day-long shooting period. There are a lot of scenes that we have to shoot in the water, and that doesn’t make our job easier. In these scenes, we have lots and lots of figurants. The most important is not to work after-hours, do not go to overtime,  because that costs a lot of money. Post-production is a much slower process. Editing, cutting visual, and audio. Visual effects. These take up a lot more time, but still, we have to keep up with the schedule.”

Are there any other projects of yours that had to be canceled?

Gábor Ferenczy:  “At the end of winter, beginning of spring, we had a movie called „Átjáróház” that had to be canceled due to the pandemic. Other than that, nothing really else currently.”

Are there any days off under production?

Gábor Ferenczy: “It is always good to have a break when you are having such a long shooting. With a large crew, it is necessary to have a one or two-week long pause in the middle of the whole thing and let everyone recollect their energy. You got to rebuild the whole set and move it to different locations, it takes a lot out from everyone.”