348
VIEWS
Share on FacebookShare on TwitterShare on LinkedIn
ADVERTISEMENT

Shadow and Bone, the new Netflix series is based on the fantasy novel by Leigh Bardugo with amazing characters. One of the series’ most compelling characters is Inej Ghafa, a knife-wielding acrobat spy.

Character of Inej is played by actress Amita Suman and gives the series some of its most enjoyable cloak-and-dagger moments. However, there are many dangerous scenes in the show, most of these are performed by a Hungarian girl, Krisztina Vellai, Amita’s stunt double who is a professional circus artist.

Colorblind casting wasn’t the only reason that made a Hungarian caucasian female circus artist to be the stunt double of the Nepal-born, British actress Amita Suman playing Inej in Netflix’s “Shadow and Bone”, but her specialty skill was.

“Colorblind casting” is actually the term Hollywood uses to explain an attempt to diversify the faces we see on-screen.

When the production needed a stunt double for a special “aerial silk act”, which is a crucial element in the story, it was a quick decision to hire a professional specialist who also happened to be a local one. The Netflix produced brand new show “Shadow and Bone” was lucky to be filming in Hungary, where circus culture has a century old history.

Krisztina Vellai, who is a Hungarian artist played Inej in the scenes where the character had to jump down from big heights or do aerial silk tricks. Also the Hungarian artist trained Amita Suman, to do simple movements on the silk for the close ups. Even if the production made their decisions prioritizing safety instead of race, now Netflix and also Krisztina are under fire for the decision. 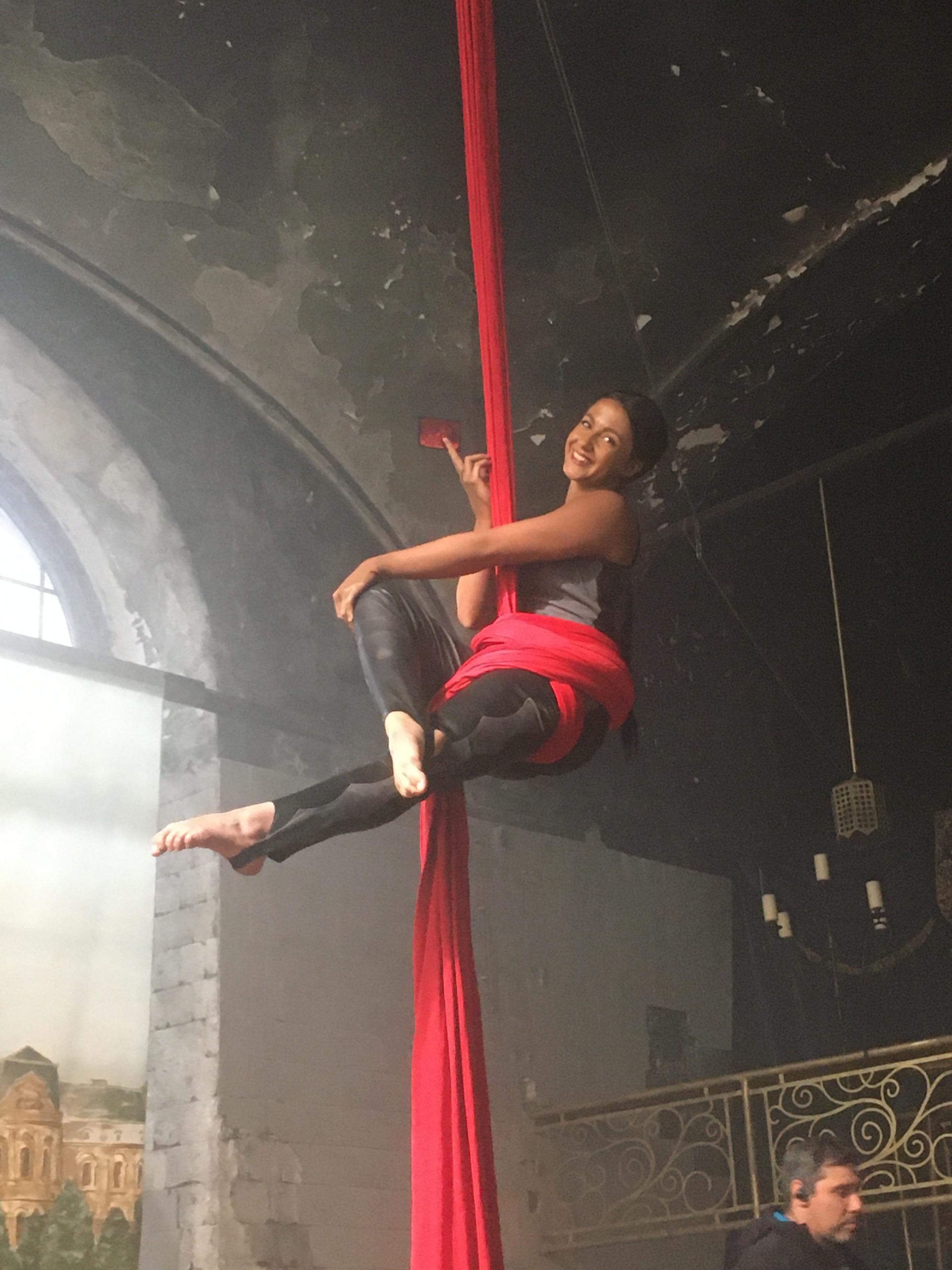 Paramount Studio’s 2017 live-action adaptation of the classic Japanese anime “Ghost in the Shell” opens to the soundtrack of a haunting chant in Japanese while surreal images of cybernetic body parts coalesce into a naked female form. As the artificial body emerges from its womb-like incubator, the outer encasement peels away to reveal the face of a black-wigged Scarlett Johansson as the film’s protagonist, Major — eventually revealed to be the cyberized reincarnation of a young Japanese girl named Motoko Kusanagi.

Tilda Swinton in Marvel’s “Doctor Strange” wearing the white robes of a Tibetan monk — plays the Ancient One. In the “Doctor Strange” comics, the Ancient One is like Dumbledore meets Yoda: When the shattered former surgeon Stephen Strange makes his way deep into the Himalayas looking for enlightenment and redemption, he becomes a student of the mystically adept, absolutely Asian Ancient One. 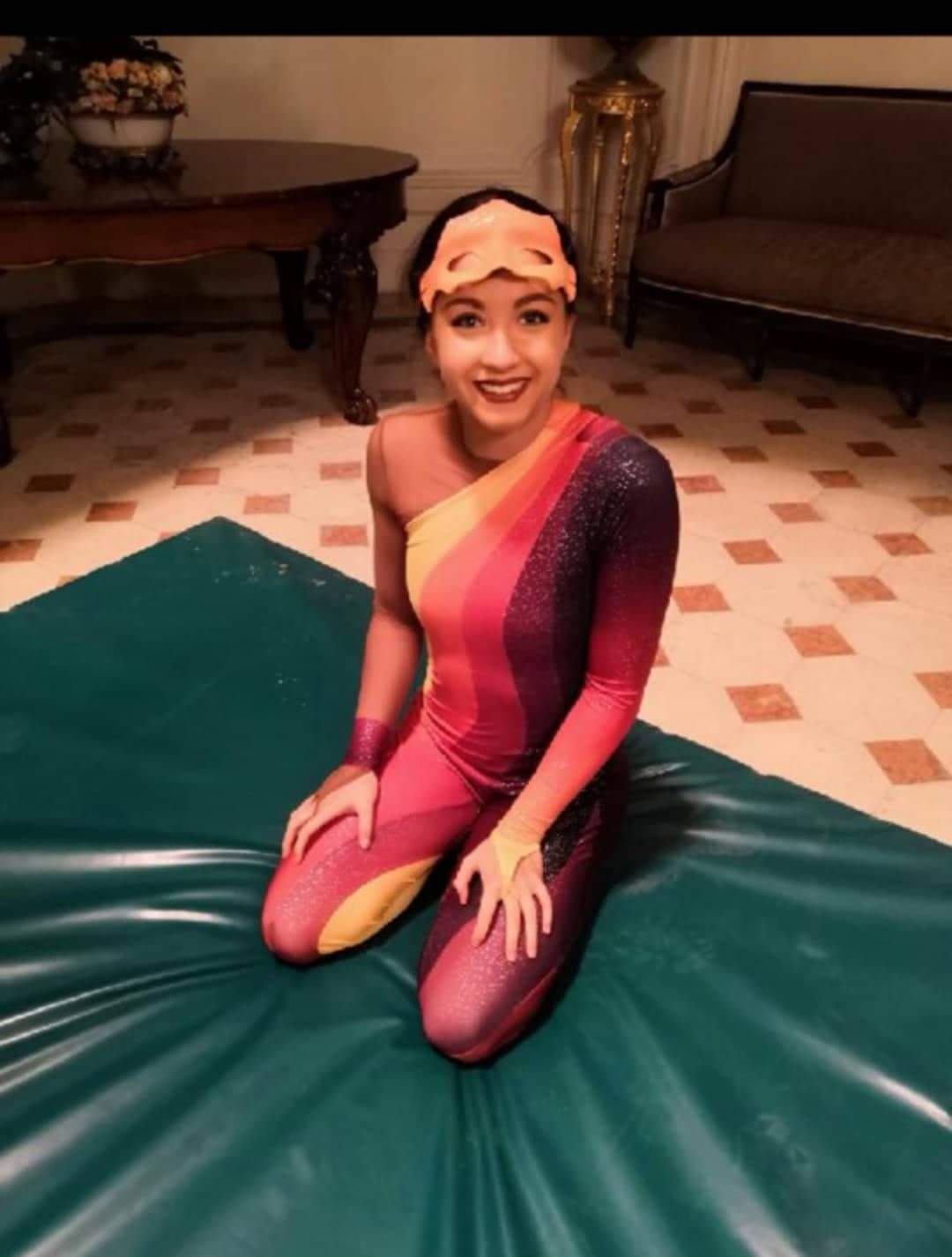 What’s the difference between the aforementioned movies and Krisztina, the Hungarian artist who became the stunt double of a Nepal-born actress?

Simply put: skill. A special skill that the Hungarian artist is world famous for, known by her unique “4 loops drop” which only a few people perform all around the world.

Stunt work is different from acting. It can be incredibly dangerous and demanding. Well trained professionals can make it look like nothing, but an amateur is endangering their life, and the lives of the other crew members, by attempting something that they aren’t qualified to do.

Making it a question of race if a professional can be chosen for a job or not can become dangerous – as was proven on the set of “Deadpool 2” where Joi “SJ” Harris, the young African-American female professional road racer was made to do a stunt she wasn’t experienced in, because she was the same ethnicity as the actor, and died as a result. Harris was doing her first film as a stunt performer, sadly also the last one.

The context of safety made Krisztina the perfect choice for the job and appropriate, due to the safety concerns involved in the role. Other important factors like height, body shape etc, could have made her an easy choice as the stunt double they thought would work best. 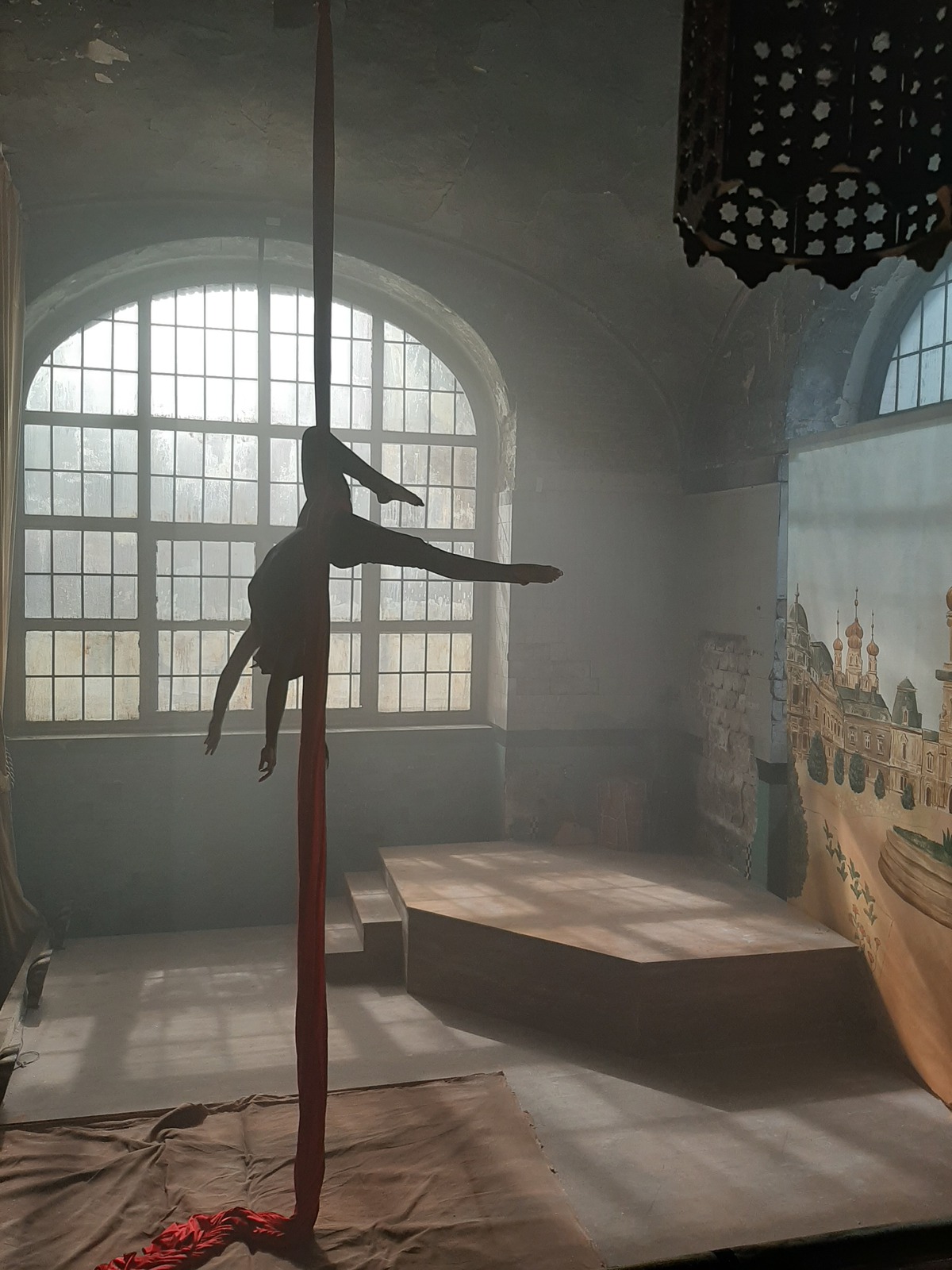 In the story an acrobat gets injured, and Inej takes her place. That’s where the production needed to use the aerial silks double, (silk could be described as kind of a ribbon hanging from the ceiling). The scene became so successful that it’s been part of almost all the trailers of the series.

Being the stunt double of Inej most probably wasn’t a simple job. The character of Inej doesn’t just perform as an acrobat of silks but jumps down from balconies occasionally even descending from 30 meters height to a library which was also part of Krisztina and the professional stunt team’s tasks.

Suman hasn’t been shy about praising Krisztina, even shouting her out in a few interviews. “All the cool and intricate stuff that you see, that was my incredible stunt double. She definitely elevated Inej for me,” Suman told Harper’s Bazaar.

“The red tissue girl with blond hair and white dress”

As we know Krisztina doesn’t make a living from movies, she works in different circus shows, varietés and events. But as a circus artist, looks are part of the brand and recognition. She is worldwide known as “the red tissue girl with the blond hair and the white dress”. That’s her character, her image in circus culture. 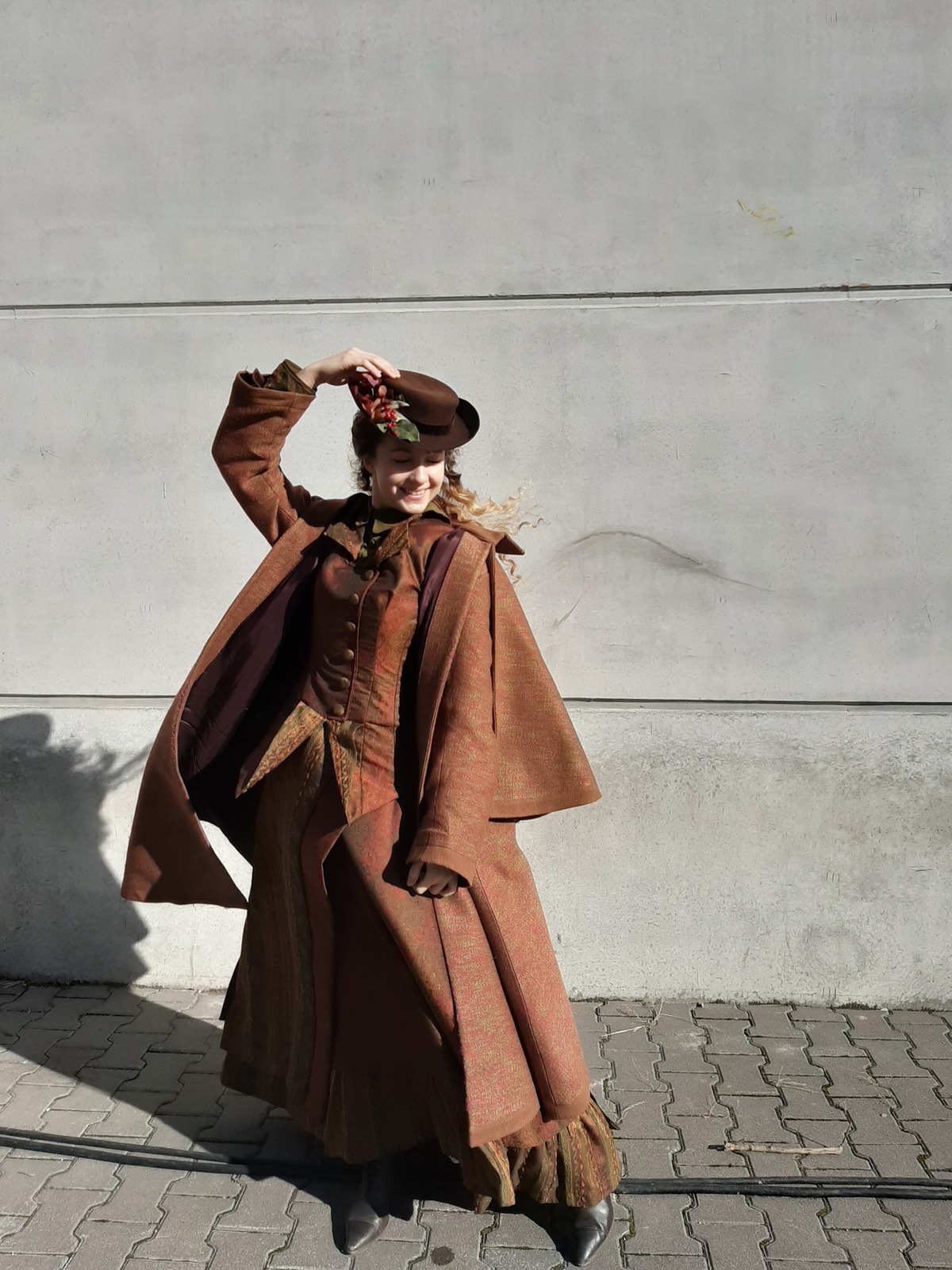 Racing with the pandemic

Filming started in Hungary during the Summer of 2019 and the production hired Krisztina in October. As the coronavirus began spreading in early 2020, and states issued mandates to try to contain the pandemic, individual film and television productions have shut down across the globe.

“Shadow and Bone” was based at ORIGO Studios and was also filmed on various locations in and around Budapest in 2020.

“At the time, the pandemic started rising, “Shadow and Bone” was just finished, so they could wrap in time and leave by schedule.” – was told us by ORIGO Studios. 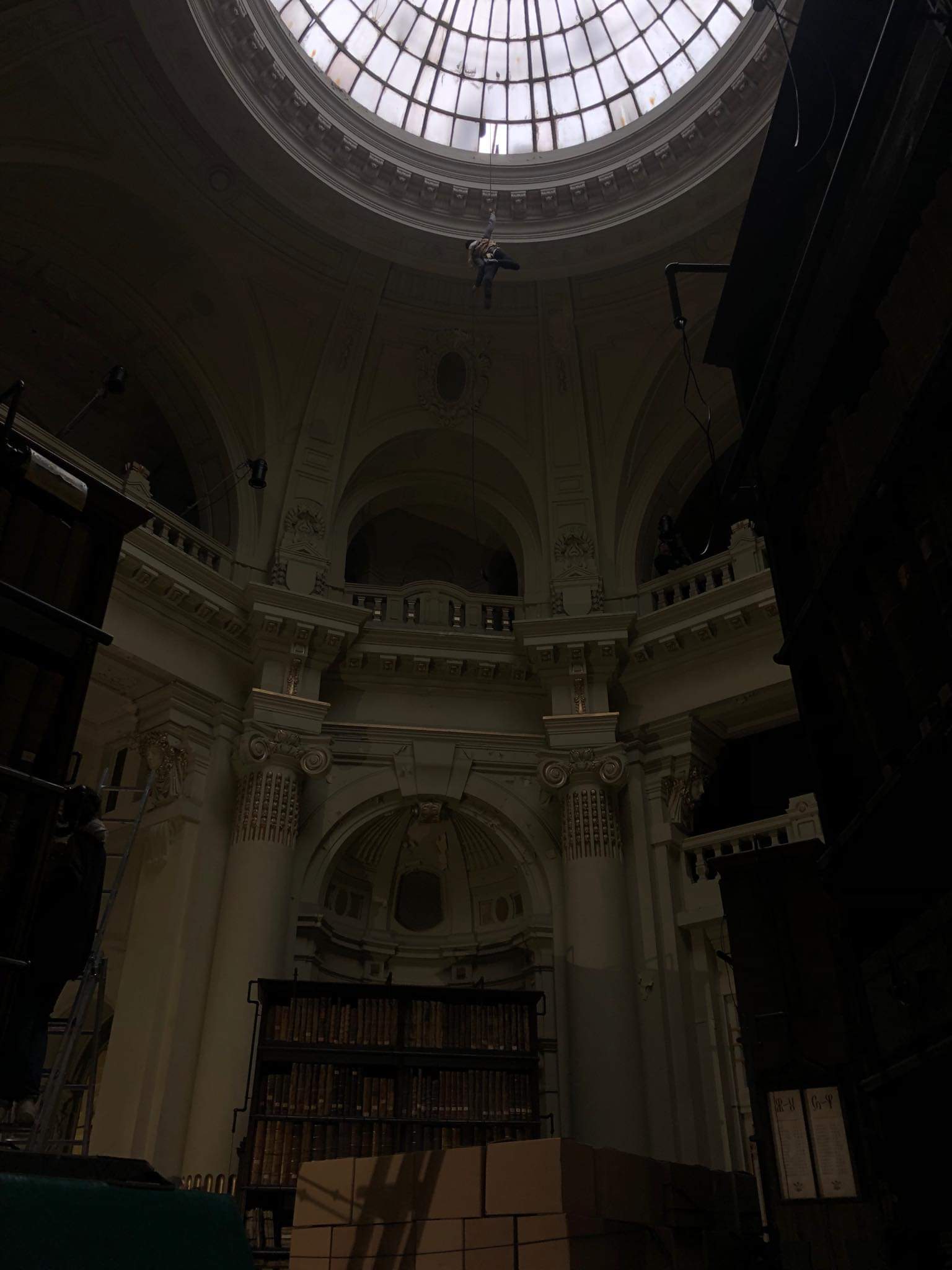 Diversity – many sides of the same coin

Fans of the show expressed their shock and outrage at the photos, admonishing Netflix and the “Shadow and Bone” creators for not casting a person of color as Suman’s stunt double.

Jessie Mei Li, who plays Alina Starkov and is also mixed race (her mother is English and her father is Chinese) also seems to have a white stunt double, Hungarian performer Eva Harangozó.

Despite the recent success and diversity seen in modern films, it might come as a surprise that despite all of these changes, diversity in cinema is still relatively low.

“Shadow and Bone” became popular also for its diverse casting.

Doesn’t diversity and colorblind casting decisions involve stunts as well? Well they should, but not for the price of safety. When safety means having a caucasian Hungarian girl playing the Roma character of Inej in a Russian-theme story, where the Nepal-born British actress needs to avoid risk – maybe that is the real diversity, and this time not just in ethnicity but also in talent and skill.

We can only hope that things will continue to improve, with the mindset that Hollywood is becoming more and more inclusive, year after year.

But maybe the word “diversity” needs a better explanation in our mind.