How Disney reused their animations?

How Disney reused their animations?

Disney, not everyone knows, was founded in 1923 by Walt and his brother Roy when the animation market had already taken its first steps and it was beginning to be understood that this language could be profitable.

The realization of these audiovisual products requires a certain cost, however some dynamics of live action cinema, for example, did not have them: actors’ cachet or the renting of locations where to set the stories. In this article, however, we are not concerned with the history of the company, but rather with the strange phenomenon that seems to concern some identical sequences in various Disney films.

It’s not just about what happens in terms of narrative and space, but even timing. Think that the effect seems to be to see the same scene again with different characters and it makes us wonder if they are quotes, lack of ideas or something else.

The reasons for these recycles are many. The first concerns the effectiveness of a sequence that has already been created and consumed by the audience who liked it very much. So why not remake it and adapt it to the new film? This choice may suggest laziness but from some testimonies it seems to be insecurity.

Here is this excerpt in which Floyd Norman, historical animator of Disney says his opinion, dwelling on how these recycles were ideas of Wolfgang Reitherman, called Woolie, another important artist of animation.

„It’s actually harder and takes longer to redraw an existing sequence, Norman told me,” „it’s a lot faster and easier to just do new animation, and it’s a lot more fun for the animators. But Woolie liked to play it safe and use stuff he knew would work. That’s all it was.” Says Floyd Norman in an interview.

The first reason is as I said in the insecurity of making mistakes, because at the time Disney was not yet the giant multinational corporation that it has become over time. People often think that the animated films of the past were more enterprising and courageous when in fact the insecurity was always there.

The films we are talking about are for example: “Snow white” (1937) and “Robin Hood” (1973), “Cinderella” (1950) and “One Hundred and One Dalmatians” (1961) and many others. In these films, as we mentioned, there are really obvious recycles where the number of characters, the timing and what happens is identical. 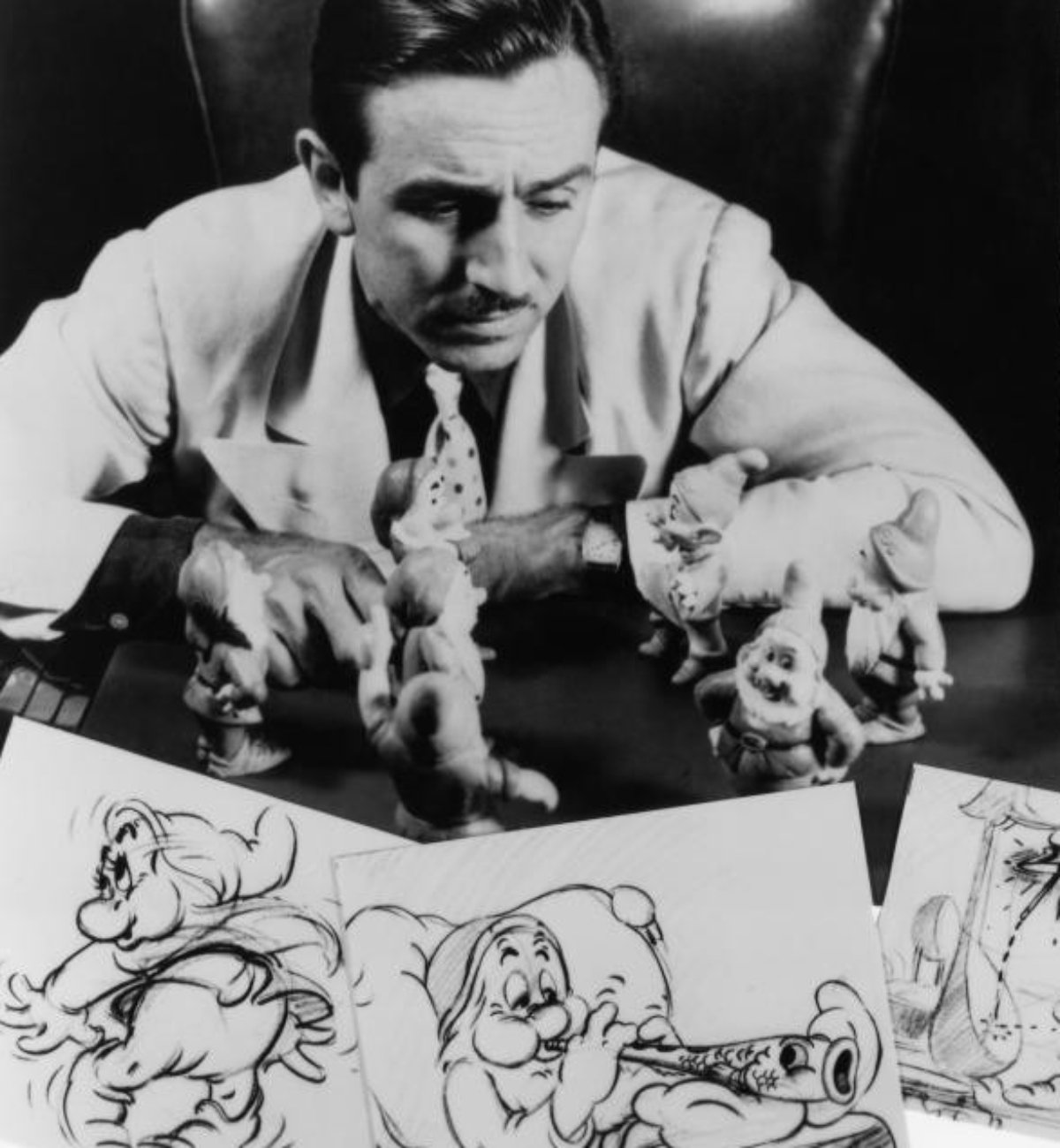 Another very obvious but absolutely true reason is certainly that of time. Creating a sequence of images, conceiving them in your own even before making them we know very well that it is quite difficult because creativity does not always arrive. And there are expiration dates, there is a time limit that must be filled.

As a matter of fact, the sequences to which we give an example are narrative connections: Snow White dancing with the dwarfs, Baloo singing, etc. These scenes do not solve any of the problems. These scenes do not resolve any plot twist but have the task of increasing the duration and create funny moments.

The co-director of “The Beauty and The Beast” (1991) also spoke on this matter. His commentary gives us two more reasons that we already imagined, one is time and the other guess what it is? Obviously money.

Gary Trousdale says: „The scene from “Beauty and the Beast” that we re-used was done for time, but not money. (well…time IS money, but that’s another story). We were just days from our final deadline to deliver, and we had an entire dance sequence (the last scene of the movie, not the ballroom) to do. 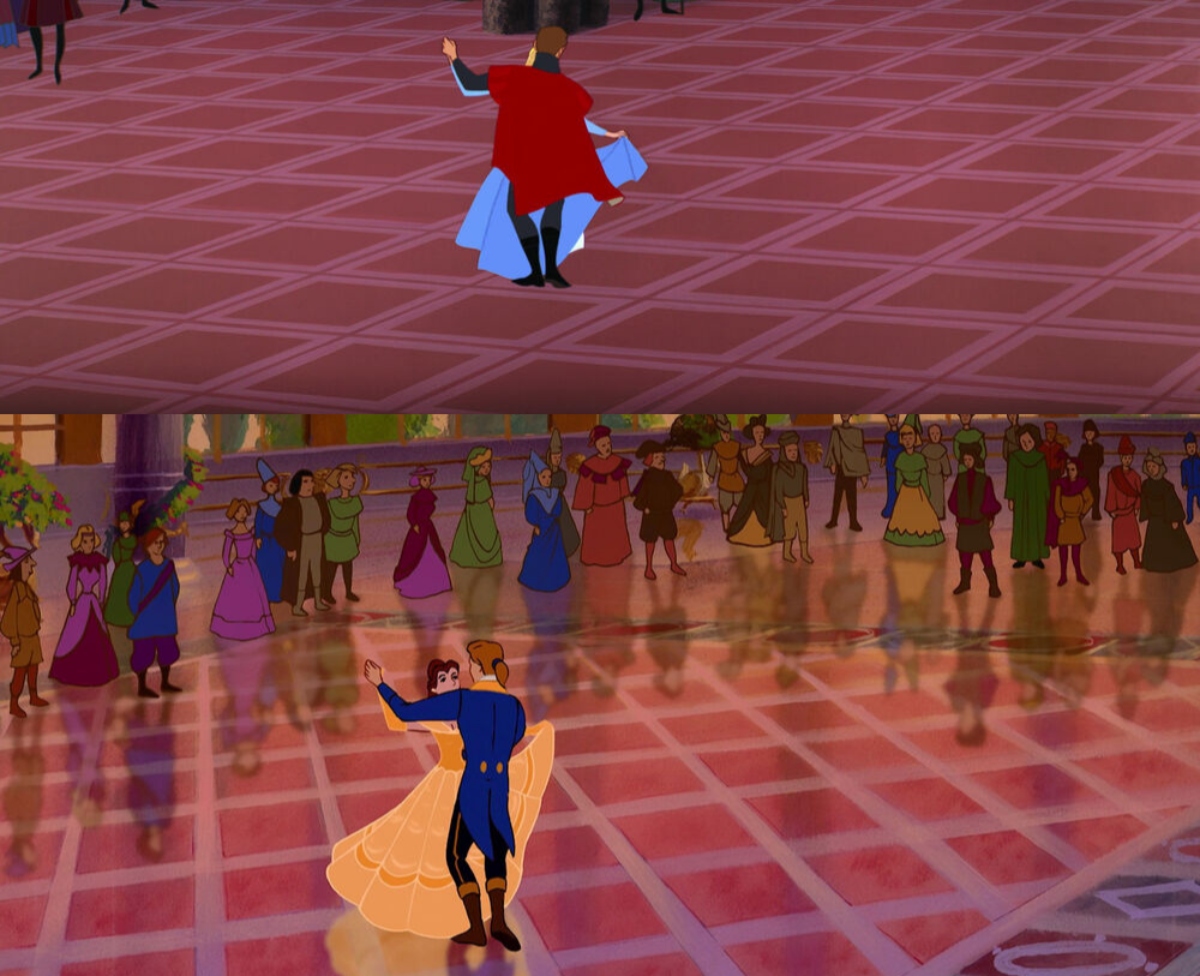 Everyone was booked and busy, and we knew damn well that Woolie had established this precedent, so we took the “Sleeping Beauty” dance, re-sized and re-positioned it, and gave the note ‘Note to Clean-up: clean up Aurora as Belle, clean up Prince Charming as Beast.’ (No, we did NOT name the beast in human form ‘Prince Adam.’ We were moving so fast by then, it occurred to us at the finish line that we had never given him a name, so Belle didn’t call him by name. It was a direct-to video-production that named him.)”

In this speech Gary explains that time is money, for the simple fact that prolonging the realization of a movie means to increase the costs of the entire production and risk losing money, especially if the audiovisual product in question can, as always, flop at the box office.

Obviously these anecdotes need to be confirmed and some of them have arrived, as we remember that Disney boasts of having a certain reputation. Tad Stones, producer of many film projects such as “Star Command”, “Buzz Lightyear”, “Darkwing Duck” and more confirmed some considerations.

„I came in under Woolie. I thought it was a time and money thing but now that I think about it, I don’t know of older examples. So Floyd is most likely right. BTW, the Snow White to Maid Marian transformations were done by Don Bluth.” So says the producer, going a bit against Gary Trousdale‘s opinion.

What we can guess is that there are multiple factors and not just one. Jeff Jonas, son of the famous Homer Jonas said: „My dad said: „Rotoscoping is not tracing… tracing is tracing”.” Continuing, Jeff says: „However what Homer said about Woolie Reitherman gives me the impression that he was a stickler for certain things done certain ways… so using what worked before makes sense in that context. My dad would always point out that some crazy business in a scene was all Woolie‘s idea- like the goofy truck crash in “101 Dalmatians”…. so he liked a particular signature.”

As you are reading, there are many opinions and sometimes conflicting views. As we mentioned in the previous lines we think that all these factors determine the choice to recycle some sequences. In addition, this will certainly not undermine the credibility of a company that has made many masterpieces, which across the board have determined the culture of the twentieth century and our present.