646
VIEWS
Share on FacebookShare on TwitterShare on LinkedIn
ADVERTISEMENT

Ever wondered what happens behind a blockbuster film? The costume designer of Dune has shared some insider info.

With over 1,000 costumes made for it, Denis Villeneuve‘s “Dune” feels every bit as epic as the novel on which it’s based. Frank Herbert‘s “Dune” features a rich universe full of aristocrats and freedom fighters, environments ranging from lush, water-centric Caladan to hot, inhospitable Arrakis, and sprawling structures, ensuring that whatever his characters wear must feel native to the saga and help tell its story. 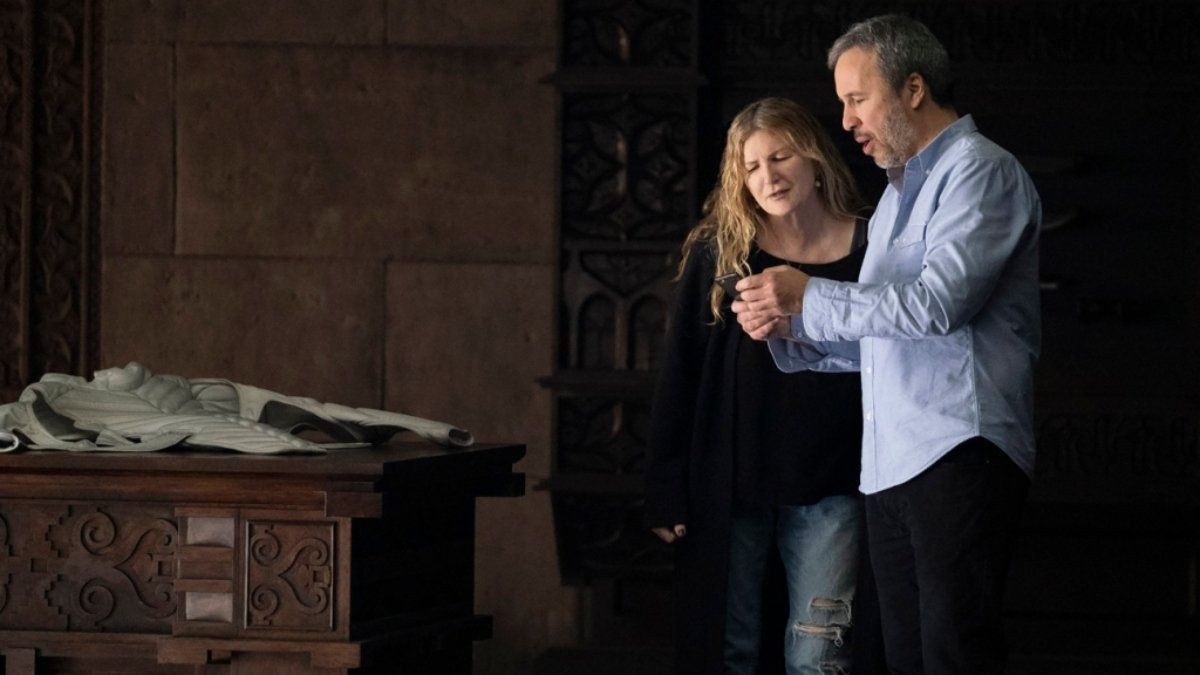 When Denis Villeneuve first approached costume designer Jacqueline West to work on “Dune”, she flatly refused. “No, I don’t do sci-fi,” West remembers telling the filmmaker. Determined, Villeneuve circled back weeks later and asked again, but West wouldn’t budge. “Denis, I love your work,” she told him, “but this just isn’t my genre.”

West’s reputation for deep research and character-driven design was precisely what appealed to Villeneuve as he was envisioning a sci-fi epic of uncommon complexity and grandeur. “He kept saying the reason he wanted me was because of my background in historical work,” West says. “And he had read some quote Brad Pitt once gave saying that I was a ‘method costume designer.” It was all very flattering, but I just didn’t think I could do it.”

“Dune”‘s lead producer Mary Parent, who had worked with West on “The Revenant”, then intervened. Parent said, “Jacky, you just need to meet with him. Come to my office at Legendary alone; I’m going to put Denis on the big screen with you from Canada, and I guarantee you, once you hear his vision for this movie, you will want to do it.”
“So I did that,” West remembers, “and she was absolutely right.”

While the book has influenced everything from “Star Wars” to “Mad Max”, it wasn’t a surefire choice for adaptation. Despite its outsized impact on science fiction, “Dune” was for many years considered unfilmable. Filled with exposition and inner monologues, the 15 books (six written by Herbert and nine completed posthumously by his son Brian and writer Kevin J. Anderson) have a breadth that doesn’t necessarily lend itself to a visual medium.

Multiple studios tried (and failed) to adapt “Dune” faithfully; David Lynch disowned his 1984 attempt, while directors like Alejandro Jodorowsky and Ridley Scott came close to production only to see their projects fizzle. When the announcement came in 2017 that Villeneuve was working on his version, then, its success was by no means a sure thing.

With estimates for the number of costumes required to bring Dune to the screen in the hundreds, West enlisted Bob Morgan to codesign. Friends and collaborators for years, they were able to work together seamlessly. Morgan’s experience as costume supervisor on blockbusters like “Inception” and “Man of Steel” also meant he knew what it took to work on the epic scale “Dune” required.

“In our department alone, almost 200 artists came in, all for the love of this,” says Morgan. “Jacqueline and I know each other so well that everything ebbs and flows, and that’s important. We were constantly bouncing ideas off each other, and communication was crucial because of the scope of everything. There are hundreds of small decisions that have to be made [on our end] and with Denis, who gave us a wonderful framework and let us be creative within that space.”

With production in multiple countries — Budapest, Hungary, Jordan’s Wadi Rum valley, and the Stadlandet peninsula in Norway all stand in for “Dune”’s various planets — the logistical challenges were unique. “We were all Zooming before Zoom became a thing,” says Morgan. “We kept leapfrogging because it was so important to have a designer present in several places at one time to look at things as they were being drafted and draped.”

Having worked as a fine artist in addition to his experience in costume design, Morgan compares the behind-the-scenes process to painting. “You start by yourself alone in a room, then there is that aha moment when you reveal everything in a gallery,” he says. “We’d been working for months, and though you have people checking in, there’s still that feeling when it’s all revealed. Suddenly there are hundreds of people all in costume coming together to film this big scene, and it’s so impressive to watch.”

The first costumes to come to fruition were “Dune”’s iconic stillsuits. Worn by the Fremen, the original inhabitants of the planet Arrakis, the suits are meant to repurpose bodily fluids like sweat into drinking water and are necessary for surviving the desert. “Stillsuits are a central element in the books, so we knew we had to get them right,” says Morgan. “[Ours] also had to fit a lot of different people and look as good on Jason Momoa, who is six feet four, as it does on Rebecca [Ferguson], who is petite and five feet five.” To perfect the concept, West and Morgan enlisted Jose Fernandez of Ironhead Studios. 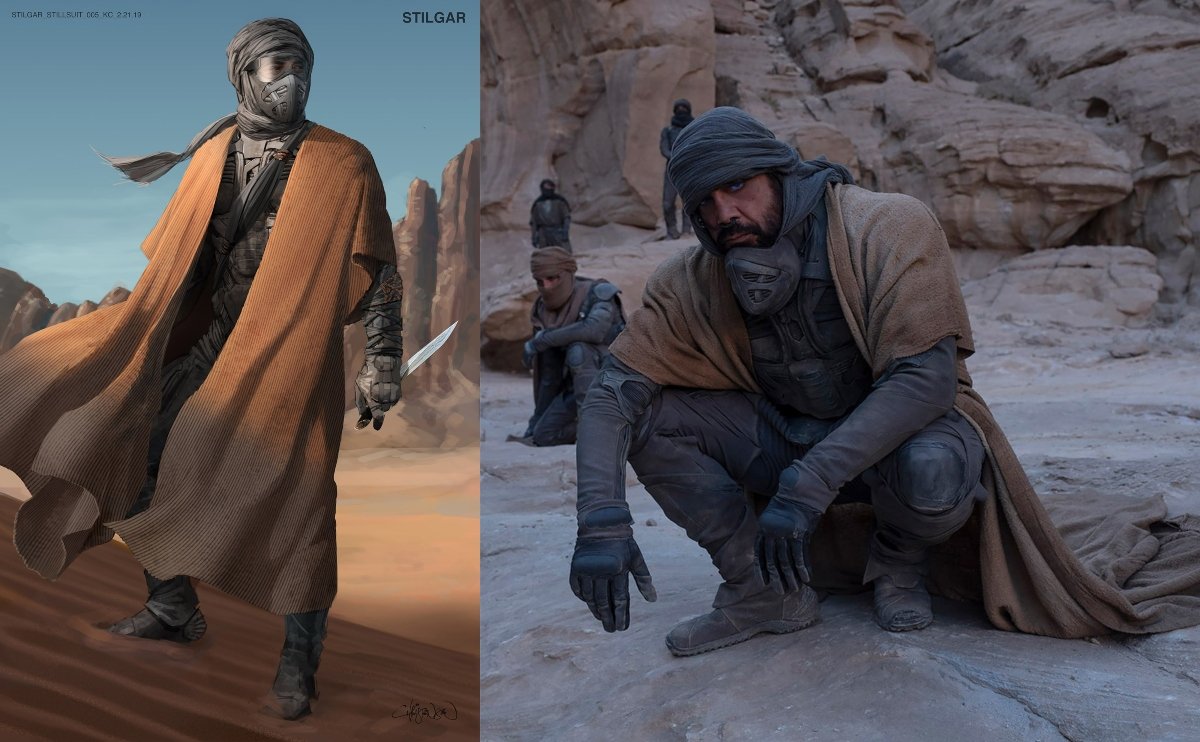 For “Dune”, his challenge was creating a practical piece that was still aesthetically pleasing. “The stillsuits are essentially survival gear for the harsh environment on Arrakis, [but] we were also filming in extreme temperatures,” says Morgan. “So they have to look like a functioning water distillery while allowing the actors to move and do their choreography.” 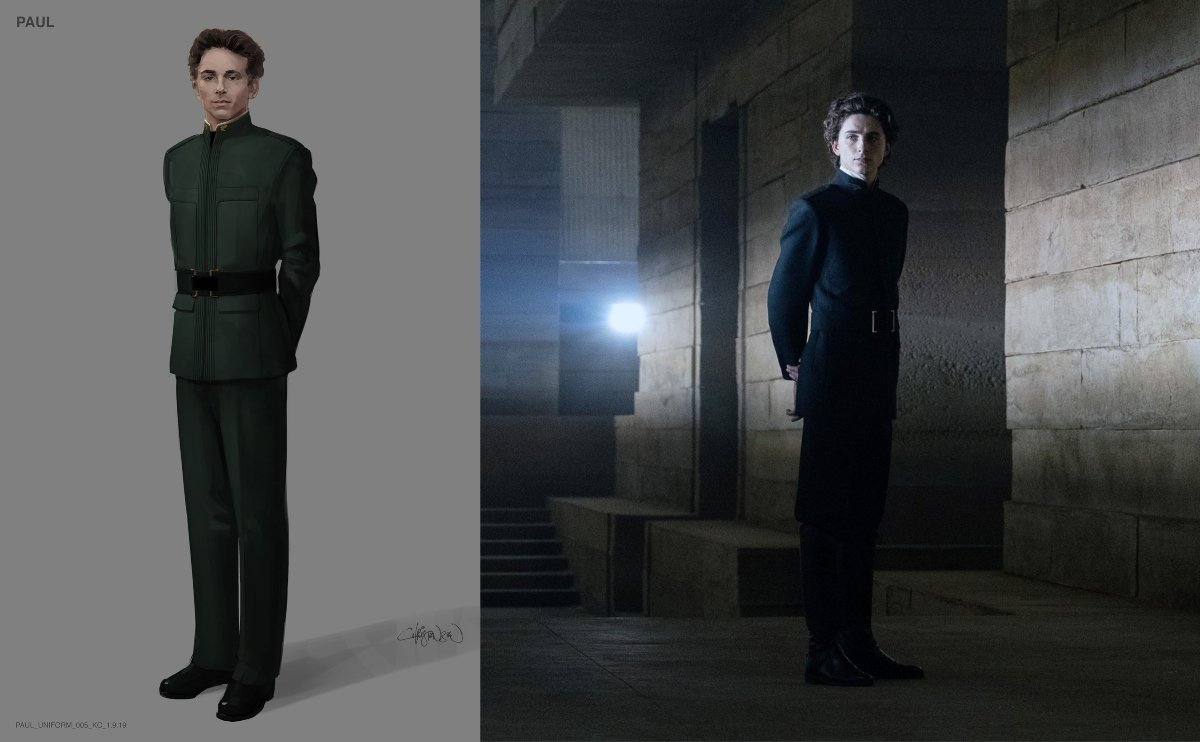 When Paul and his family touch down on Arrakis, meanwhile, they’re dressed to reflect their noble status. Fittingly, West looked to real-life royals when plotting out the costumes for the Atreides clan and their entourage. “Their uniforms were so elegant, and I referred to that for Paul, Duke Leto, and all the men of Caladan.”

As the son of a duke, Chalamet’s Paul leads a life of privilege, albeit one that is disrupted upon his father’s death. Illustrating that change through fashion was essential.

“When Paul is still living in the palace, he has this very pared-down Zhivago-inspired jacket—clean lines, no buttons as I didn’t think buttons and zippers would make it into the future,” says West. “Instead, we gave him medallions made from rare-earth metals and magnets so he could flip his collar closed when he needed to be formal. Gradually everything he wears is pared down, and when he moved toward living in the desert and becoming the leader of the Fremen, it was more Lawrence of Arabia. Those epics were such [important] resources because I knew that “Dune” was also that kind of movie.” 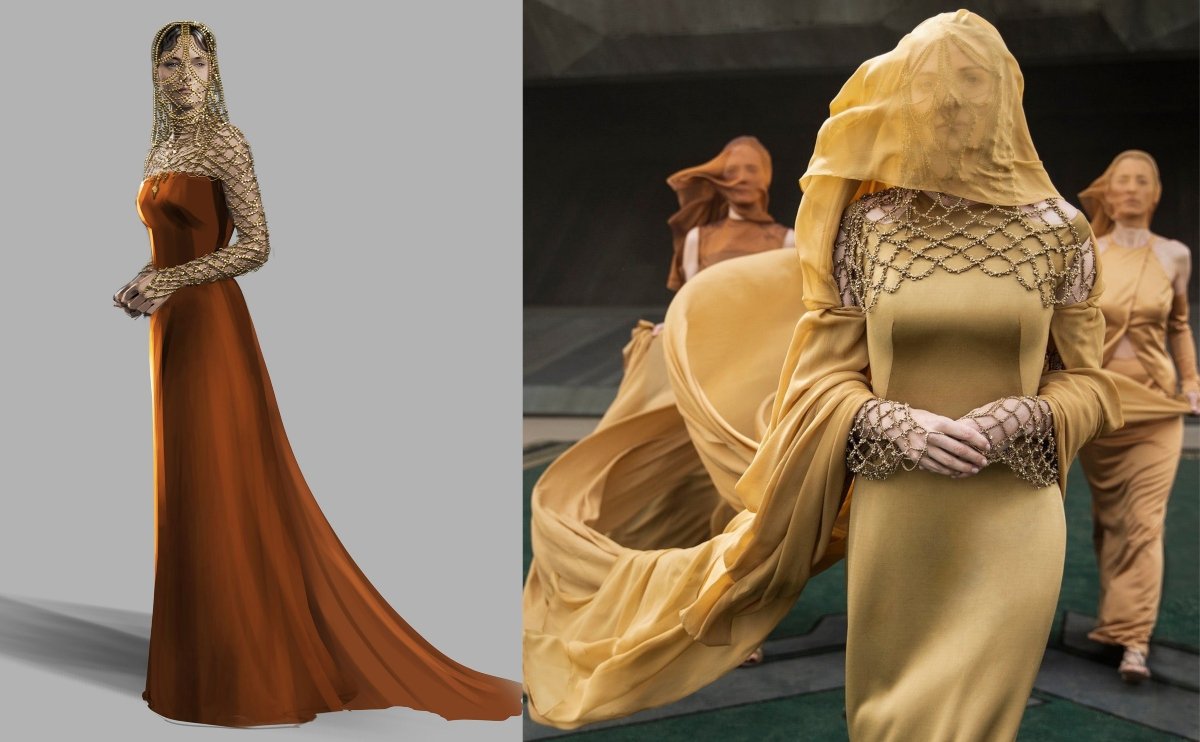 For Ferguson the masks, veils, and bejeweled finery that Jessica wears during the film’s first half illustrate her position as a concubine, not a noble. “She gets to wear the regal clothes, but when we meet her, she’s still in chains,” she says. “There is still a big hierarchal difference between her and the men making all of the decisions.

She has this eye pendant that is a wonderful symbol of that and is paired with a gorgeous veil. Jessica gets to be in the big room, but there are no other women there. Still, she has power and can kill anyone with a snap of her fingertips.” When the Atreides arrive at Arrakis, Ferguson‘s costume was a delicate component as well. Although the costume represents several things, the headpiece was made by a Hungarian designer, Virág Kerényi. 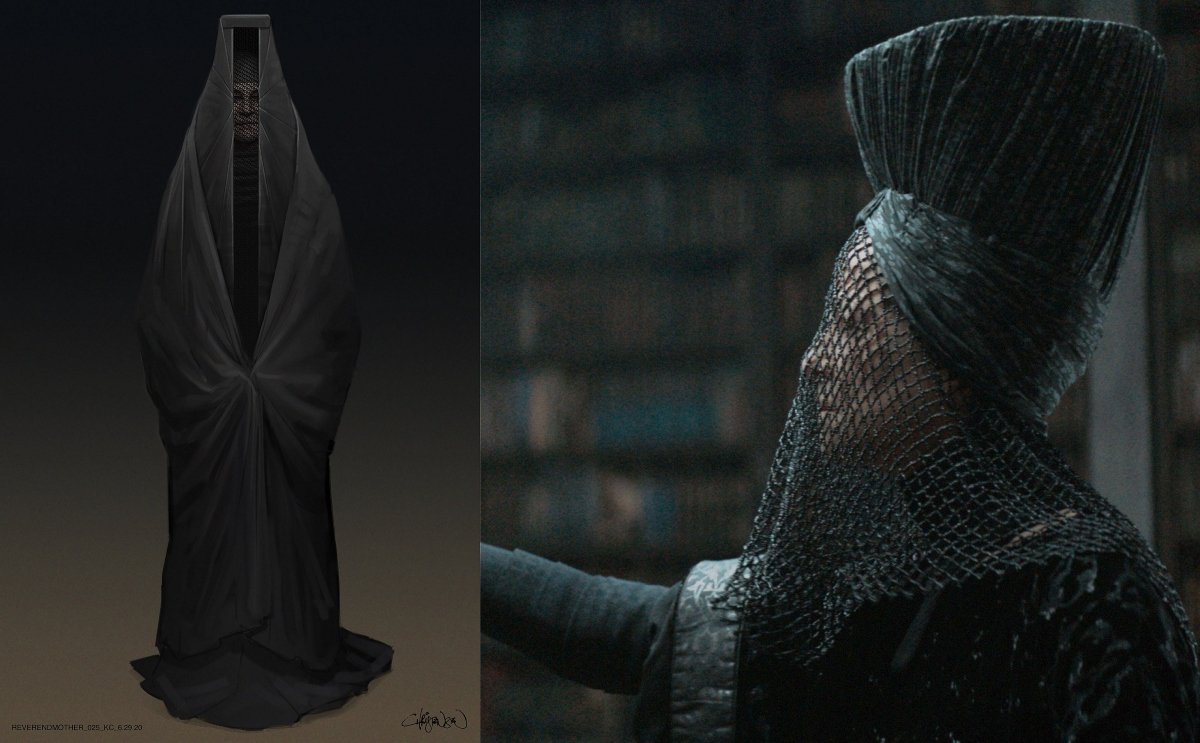 When it came time to prove those combat skills, Ferguson did so in one of the Fernandez-designed stillsuits. “I loved them and the fact that they’re just there to serve a purpose,” says Ferguson. “No matter who is wearing it, we all look the same—the suits [represent] humans adapting to nature and finding new ways to survive. People ask me why these kinds of films do so well, and I think it’s because, at heart, it’s just about human beings surviving, loving, challenging each other. They struggle, gain and lose power, the outside changes, but it’s the same universal story.”