193
VIEWS
Share on FacebookShare on TwitterShare on LinkedIn
ADVERTISEMENT

When it comes to Zombie films, Hollywood really doesn’t do the best job.

They’re great at creating content that is overly produced, has a ton of action and actually embraces the stupidity of their stories when they make large conventional action films. Yet the one thing they always miss out on is providing a proper narrative. 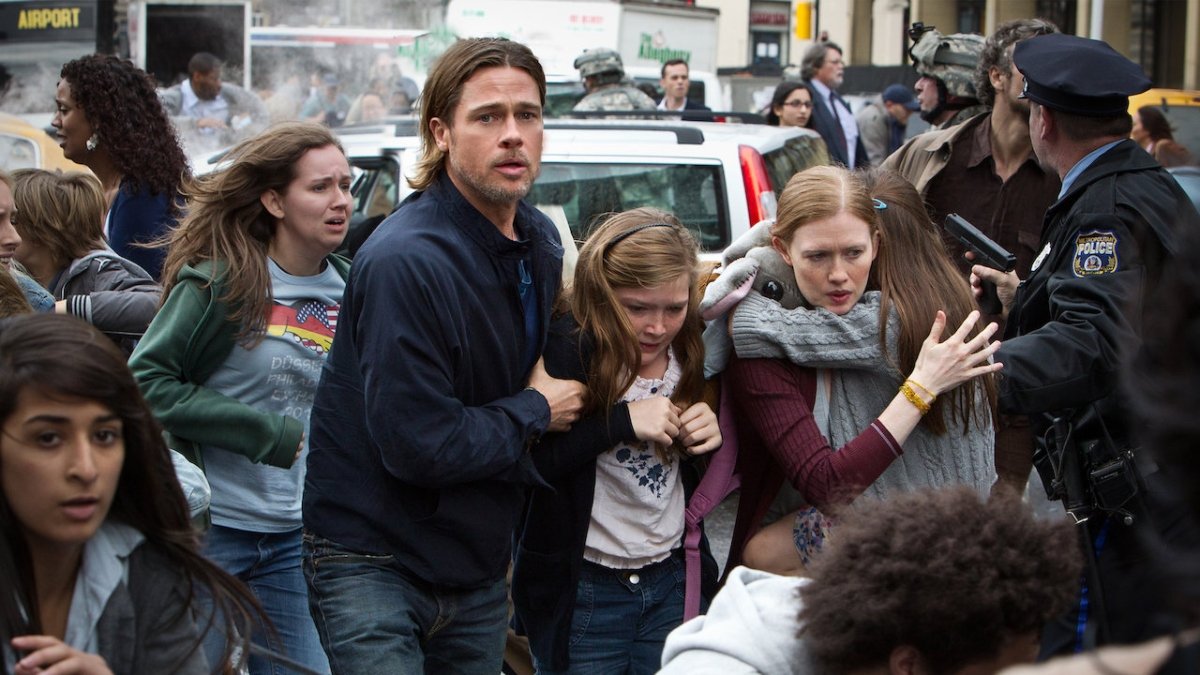 The film is set within a semi-futuristic world where a zombie apocalypse has suddenly overtaken the entirety of the world. Former UN Agent Gerry Lane and his wife Karin, along with their two daughters Connie and Rachel are stuck in heavy traffic in the city of Philadelphia when the city is overrun by zombies that sprint at full speed and are just as strong as normal humans. This is when the terror begins, as the entirety of the world begins to collapse.

Luckily, Gerry and his family are saved by an old friend within the UN, and are given safe space onboard a US Navy Vessel. Though it’s not entirely out of goodwill, Gerry is tasked with helping the US forces in finding the source of the zombie outbreak, and a way to counterattack it. Here, Gerry sets out on a ride with a group of companions to travel the entire world and figure out a way to halt this outbreak and its progression.

Saying that this is a well-directed film would be an overstatement, yet calling it a poorly directed film would be unjust. This is a film that sits right between good and bad, exactly at the average standpoint. The director Marc Forster isn’t really known to create films like this, instead he’s known for more somber films such as “Finding Neverland”, “The Kite Runner” and “Stay”. However, he still manages to do a decent job at crafting a zombie survival and action epic in “World War Z”.

Though I do have to say, that the star studded cast does not disappoint by any means whatsoever when it comes to the performances. I mean, you literally have Brad Pitt in the lead. Nothing can go wrong in the acting department when you have an actor of such a strong caliber in the lead role. Brad Pitt’s performance as Gerry Lane is quite amazing and pulls out both emotional and thrilling reactions from us.

Mireille Enos as Gerry’s wife Karin, is not just a great character but also amazingly acted. There are also other notable actors such as Matthew Fox, Peter Capaldi and James Badge Dale who deliver solid performances yet they do not stand out as much as the ones mentioned before. Even the child actors in the film deliver a pretty well rounded performance, they’re engaging to watch and their performances are highly believable throughout the film.

The action scenes are the bread and butter of this movie, every single sequence is terrifying to say the least. Let’s start off with the zombie designs, they look like real humans yet more deformed and somewhat rotten. The zombies are super fast and very agile, they’re capable of jumping and crossing through high walls.

This agility is showcased best when they bundled together to climb the wall that is surrounding Jerusalem. That entire sequence in particular is extremely mesmerizing to look at, it’s animated really well and the CGI work is by far some of the best in the zombie film. 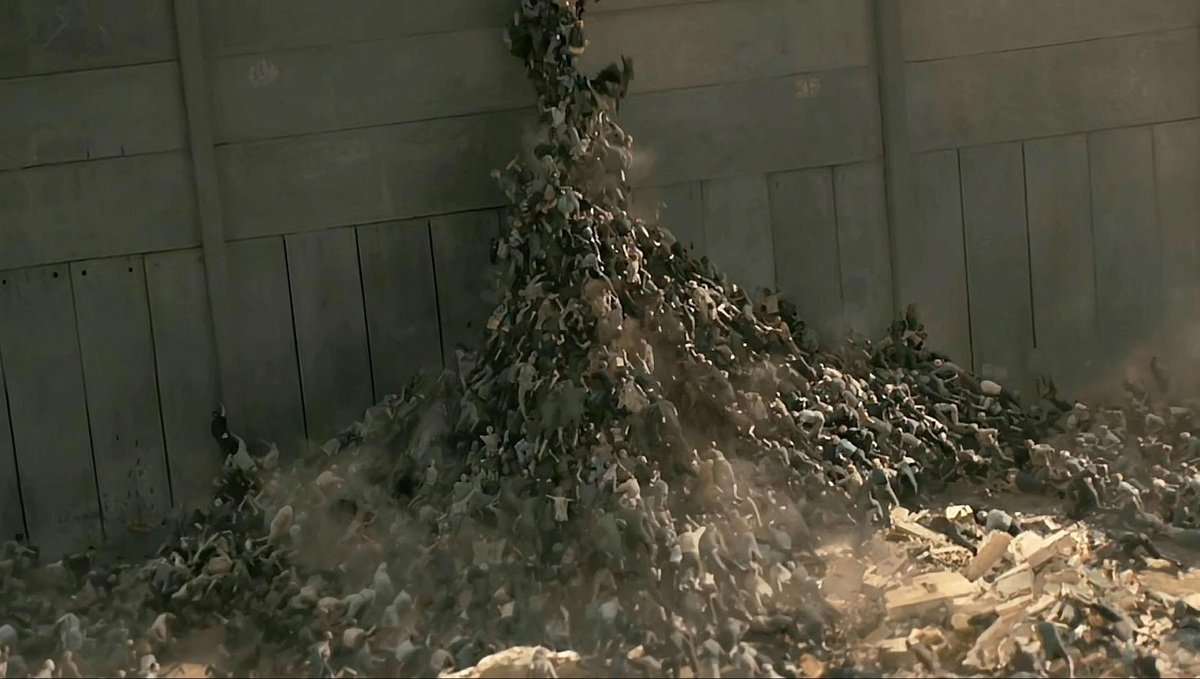 The cinematography plays a huge part in showcasing these action sequences in their utmost glory, especially during the action scenes themselves. The film is shot with large shots of wide areas, there are barely close spaces, and they’re always out in the open whenever an invasion or an attack happens.

Referencing again to the Jerusalem sequence, it was in a wide open city showcasing the entirety of the city and its streets along with the wall that is surrounding it. The action itself is amazing, but lots of blood, gore and battles that engage you and thrill you throughout the film.

The best part about this film by far is the set designs and locations, each one being better than the last and being an absolute spectacle to witness. The film was shot in multiple locations, such as Malta, Scotland and England. However, the one standout location within the film was definitely the final sequence which showcased Russia. 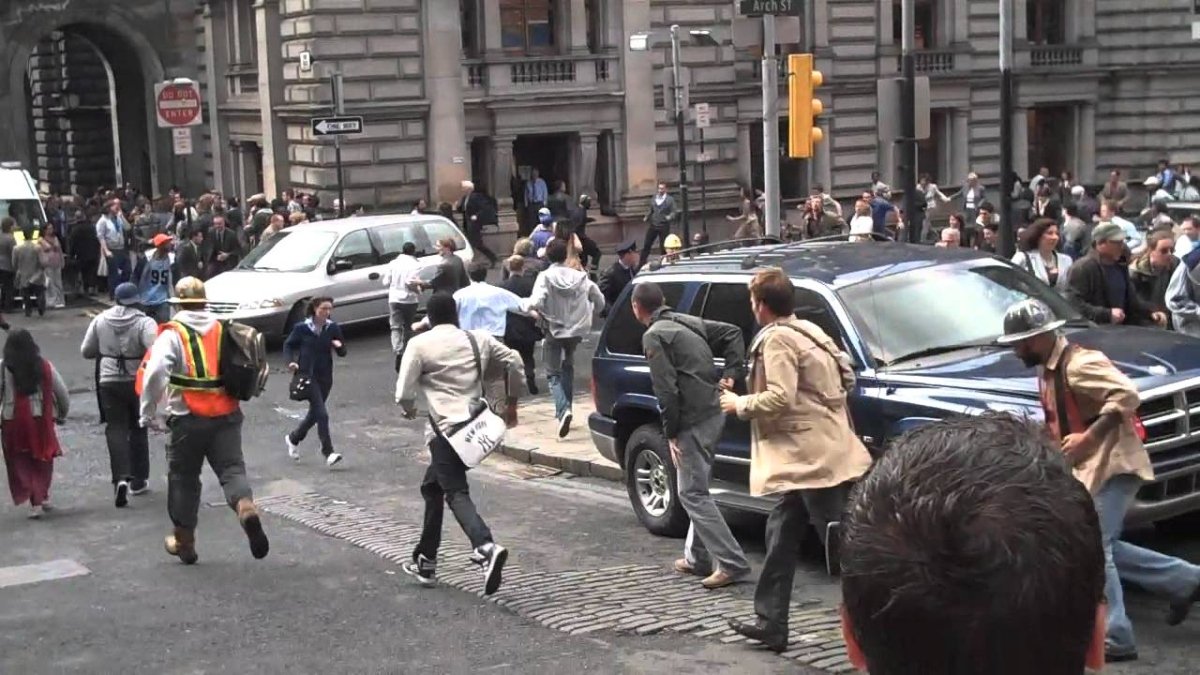 The whole Russian sequence, was actually filmed in In the country of Hungary, and the city of Budapest. Budapest is a naturally beautiful city, and there’s just no way that you can create it to look any worse. Even during a zombie outbreak, Budapest still retains its utmost beauty.

When it comes to the soundtrack of the film, there’s really nothing that stands out much. Sure the main theme itself is quite hummable, yet it doesn’t really stick to your head and you kind of forget it right after you finish the film itself. I would have preferred if the film had more action based themes, which it severely lacks.

Most of the music within the film is suspenseful, which does work within the confines of the overall film but still it misses out the point when it comes to the action sequences because they require heavy orchestral music which could engage the viewer heavily within the action sequences of themselves. Though it is still a decent soundtrack, and it doesn’t take away from the film much.

In conclusion, “World War Z” is a film that could have been so much better with a little more focus to its overall direction, pacing and a few key filmmaking aspects that define a film’s overall quality. Though it is a movie that will entertain you throughout its runtime, it is also a movie that you will leave wishing for more. The film has a ton of action, absolute loads of it, yet it doesn’t really matter much because at the end of the film you do realize that it was all for nothing.

In general, it could have been almost as good as it is aesthetically, if the film makers were more passionate about making it. In general, the movie is something that you would think is just another corporate piggy bank.