803
VIEWS
Share on FacebookShare on TwitterShare on LinkedIn
ADVERTISEMENT

Many people tried to adapt the Dune, but the 1984 one left its mark on people. That’s nearly 40 years ago. How have things changed over the years? Let’s compare the cast of the long-awaited 2021 film and the old one.

The premiere of “Dune” is fast approaching, and fans are getting more and more excited to finally see the film, which has been delayed by huge amounts. Many are/were so excited that if they can’t see the new version yet, they will watch or even re-watch the 1984’ one. It’s not uncommon for people to read it either, although there is a waiting list for “Dune” books in Budapest‘s Szabó Ervin Library and they are only to be found – if found at all – in antiquarian bookshops.

Multiple people have tried to adapt “Dune” for the screen in the 50+ years since it was published. Cult director David Lynch gave it a go with a 1984 movie, there was a miniseries on the Sci-Fi Channel in 2000, and now Villeneuve has taken his shot. How have things changed over the years? Now that we have photos from the new movie, we thought we’d compare the looks of the characters in the old and new movies to find, starting with our leading man:

Paul Atreides, the heir to the powerful House of Atreides, was played by Kyle MacLachlan in “Dune” 1984 and Timothée Chalamet in “Dune” 2021. We daresay Chalamet looks a little more convincing in the part since Paul is very young when the movie and the book start. He’s only 15 almost 16 and Chalamet has a boyish, childish look to him even though he is also much more than 16. 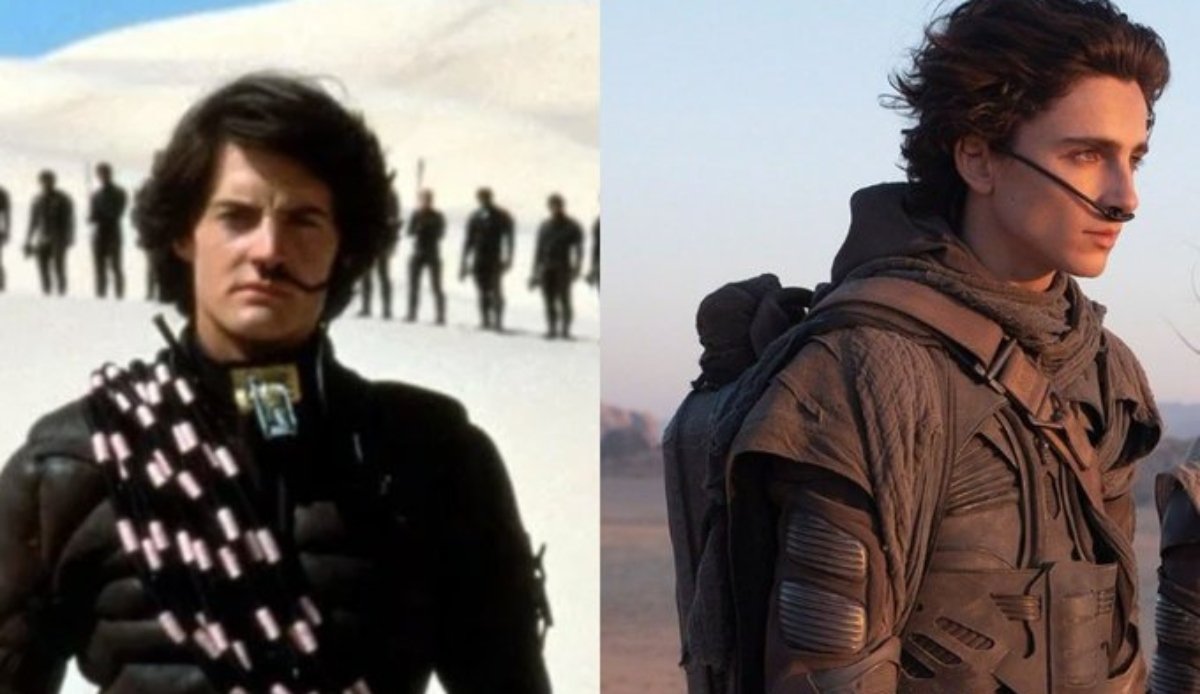 In these pics, Paul is in a stillsuit, which is an outfit designed to reclaim and repurpose the body’s moisture; if you’re venturing into the deserts of Arakis, it’s essential. According to the book, if the suit is properly fitted, the wearer will not lose more than a thimbleful of fluid a day. They both look futuristic, but the one in “Dune” 2021 looks a little more like something a real soldier might wear. One thing that we don’t understand is the color of the stillsuit. Black in the desert? Really?

The next one is Lady Jessica, Paul’s mother. She’s a member of the Bene Gesserit, the key religious, social, and political force in the “Dune” universe. She is one of the most important characters, next to Paul. Without giving too much spoiler, her and Paul are a real team. It’s extraordinary in a movie, that a mother and a son have this close bond as they have. 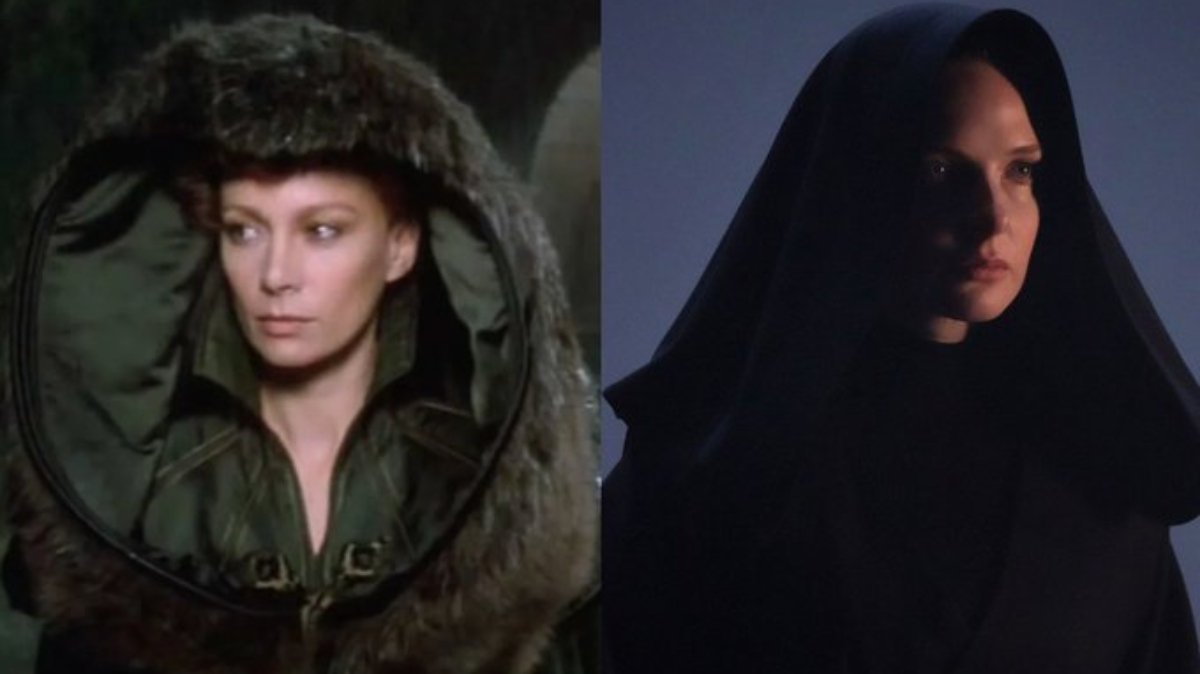 Lady Jessica is played by Francesca Annis in “Dune” 1984 and Rebecca Ferguson in “Dune” 2021. Both actors have a sort of beautiful but cold look going, which is appropriate for the character. The costumes in the earlier movie are a little more extravagant, design-wise but on the other hand, we didn’t see much about the new movie costumes. One for sure, in the book, Lady Jessica has vibrant ginger hair color – like in the 1984 movie – which is important in her origin story. In 2021 “Dune”’s trailer looks rather brown than ginger.

Dr. Liet Kynes is a leader of the Fremen, the native people of Arrakis. Kynes is also a planetary ecologist and has a dream to one day terraform Dune into a verdant Eden with running water and lush forests. 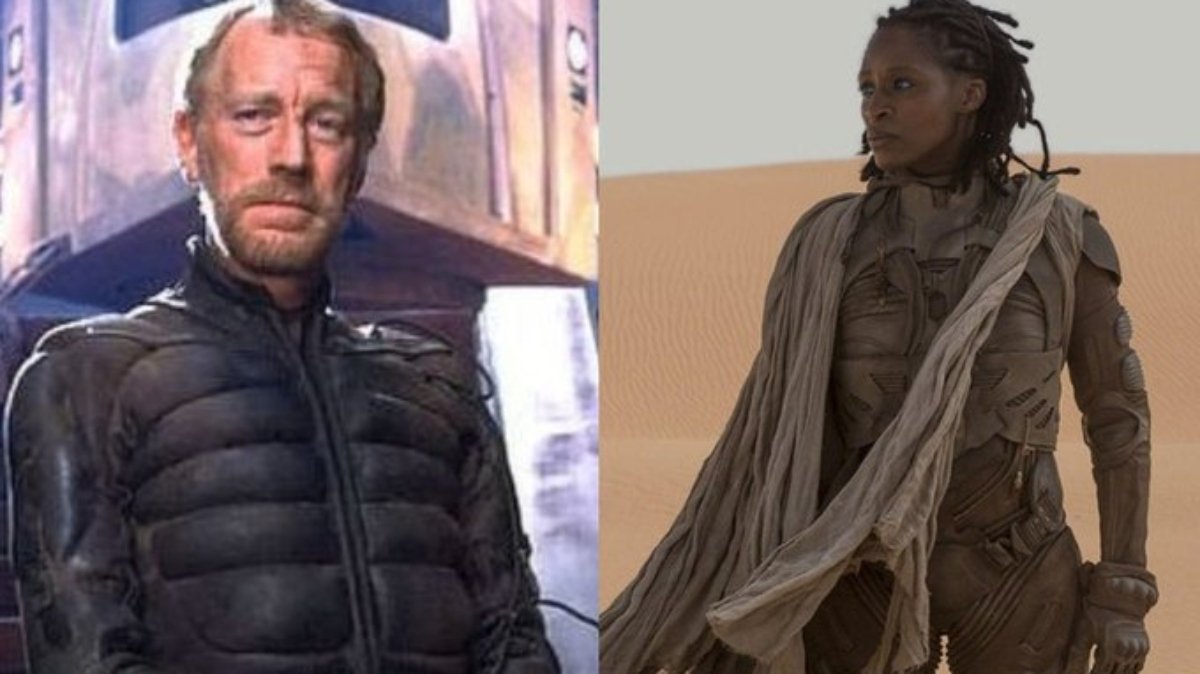 Kynes was played by Max von Sydow in “Dune” 1984 and Sharon Duncan-Brewster in “Dune” 2021. This is the largest casting change since Kynes is written as a male character in the book but is now played by a woman. “What Denis had stated to me was there was a lack of female characters in his cast, and he had always been very feminist, pro-women, and wanted to write the role for a woman,” Duncan-Brewster told Vanity Fair. “This human being manages to basically keep the peace amongst many people. Women are very good at that, so why can’t Kynes be a woman? Why shouldn’t Kynes be a woman?”

Chani is also another member of the Fremen and (minor spoiler) Paul’s eventual love interest, although it’s not clear how much time she’ll get in the first movie. Villeneuve is adapting “Dune” as two films, and Chani is mostly a presence in the back half. She’s played by Sean Young in “Dune” 1984 and Zendaya in “Dune” 2021. 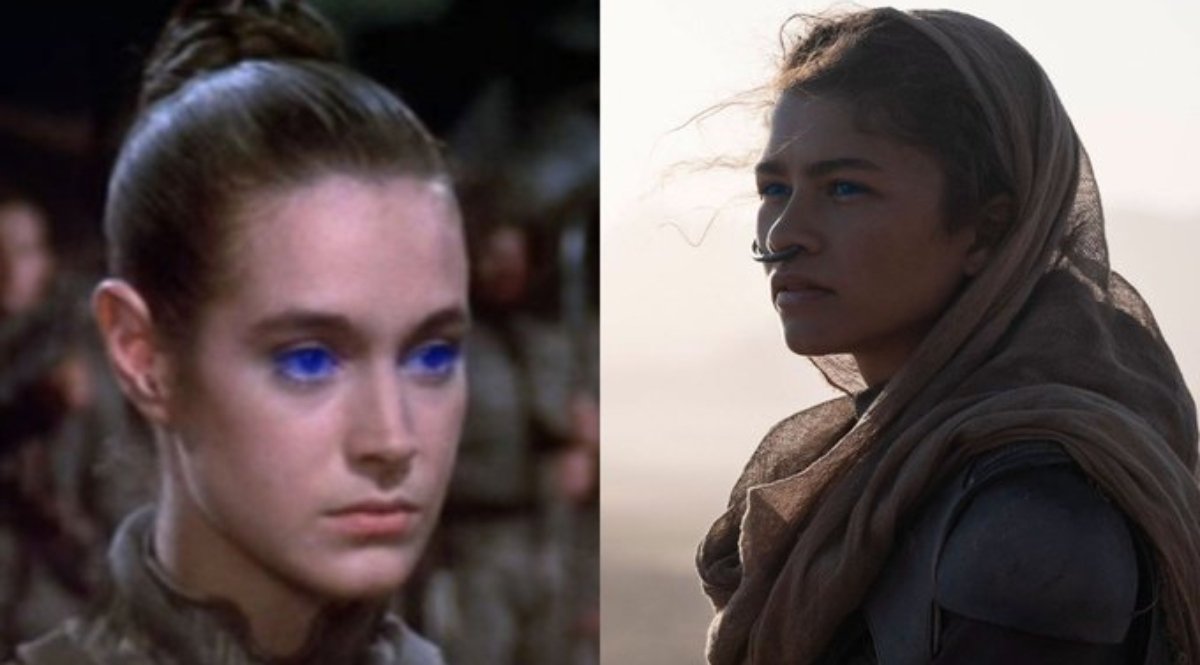 Notice the blue eyes in the first pic. The Fremen live their lives in close contact with the spice — it’s in the air all around them; they can’t help but breathe it in. One consequence of being around spice that long is that you get striking blue-in-blue eyes. But the tradeoffs are worth it…or so something. Another difference is the actress’ skin tone. Sean Young is a great actress, and she was beautiful in the movie, but simply no one can be that pale while they living in the desert on the sun.

Duke Leto Atreides is Paul’s father. Shrewd and commanding, Leto is a good father to Paul and partner to Lady Jessica – not her husband -, but his position puts them all in a position where they’re in a lot of danger.

Duke Leto is played by Jürgen Prochnow in “Dune” 1984 and by Oscar Isaac, Poe Dameron, and Moonknight himself, in “Dune” 2021. The 2021 movie will be full of A-list actors and actress’. These are a lot of big names. 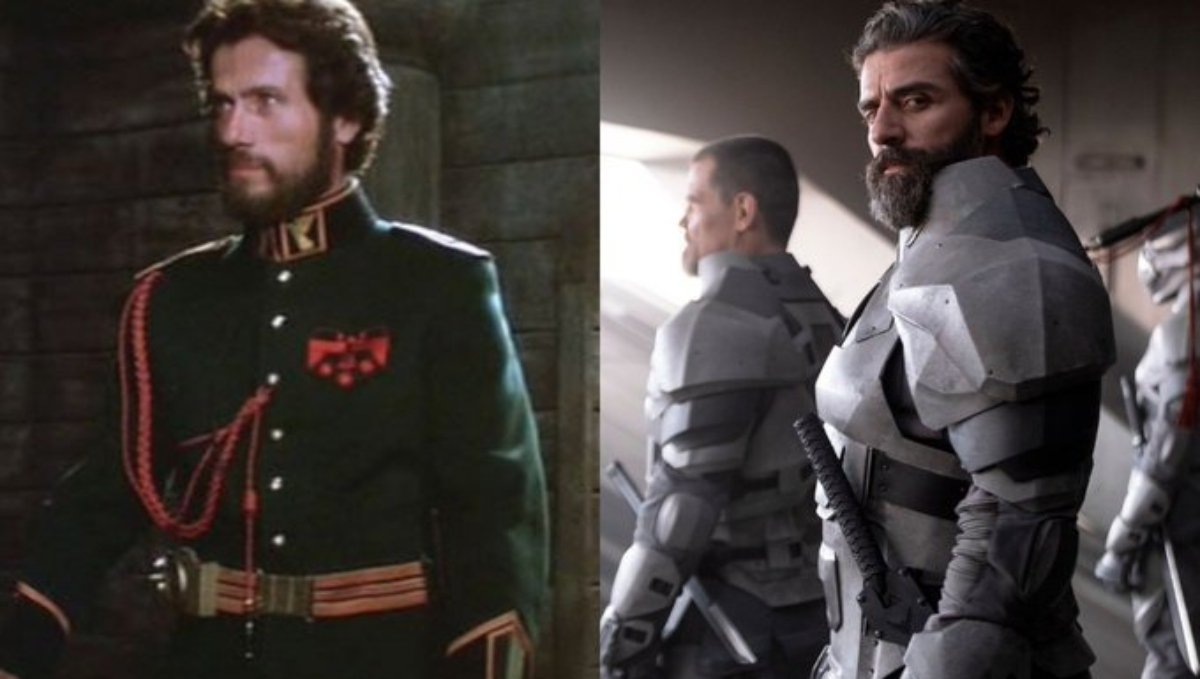 As for the costumes, Duke Leto looks to be wearing a 19th-century military uniform in the older movie, and an armored number straight out of Mass Effect in the new one. In both cases, the facial hair is on point.

Duncan Idaho is the swordmaster of House Atreides, and one of Paul’s many tutors. He’s played by Richard Jordan in “Dune” 1984 and Jason Momoa in “Dune” 2021. One big name again. And Duncan Idaho isn’t even a big part…at least not in the first book.

The book did not specify that Duncan was clean-shaven, but if it did, that’s one reason why Momoa might have shaved off his beard. His charisma and physicality are on display, though, as he crouches in a loose-fitting shirt with a weapon in his hand and his long hair tumbling over his shoulder, ready to strike. By comparison, Jordan’s take on the character seems a little upright, at least based on these two stills.

Gurney Halleck is another of Paul’s tutors, a military man who’s also an accomplished musician. He’s played by Patrick Stewart in “Dune” 1984 and Josh Brolin in “Dune” 2021. This might be the one instance where the actor from the old movie is more famous than the new, although that’s arguable. Stewart may be Captain Picard or X Professor, but Brolin is Thanos. 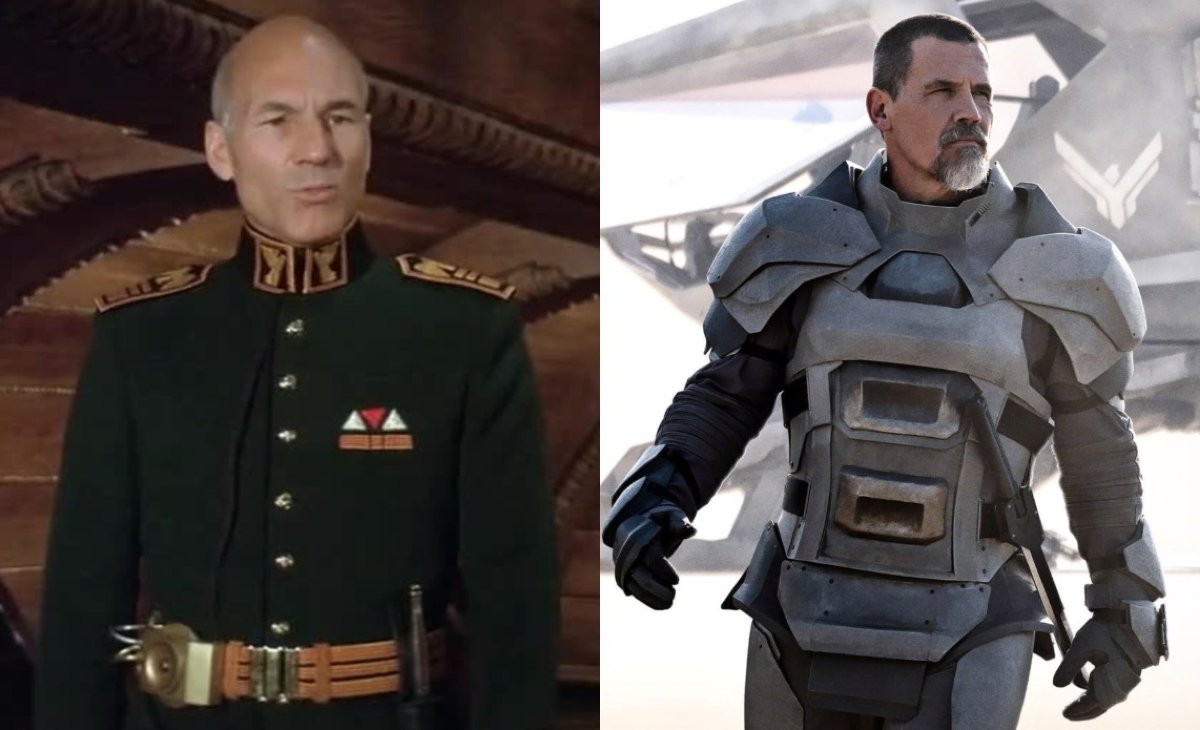 Visually, “Dune” 1984 seems to emphasize more of the poet side of Halleck and “Dune” 2021 the warrior side. Brolin looks pretty intimidating in that bulky armor.