What was purported to kick off the MCU’s long-awaited fourth phase ended up becoming the most-delayed film in MCU history.

Due to the continuing pandemic, it was a threat to release it to the world and releasing such a gigantic film to only streaming services would’ve been lackluster. However, now that it is finally out and I have finally watched it, I must say I have missed the Marvel Cinematic Universe and their incredibly large place in my yearly routine. I had an absolute blast being inside the theaters as I watched the return of MCU in all its glory.

Films regarding spies and espionage are always exciting; they have an aura of freshness to them. They have all these gadgets, and brand-new technologies that Marvel characters have always amplified that experience. “Captain America: the Winter Soldier” is one of the prime examples of this, a superhero film that sticks with you.

The best thing about “Black Widow” is its post-Civil War and pre-Endgame setting which gives it such a huge boost in creativity. The film yearns to explore Natasha Romanoff’s character. 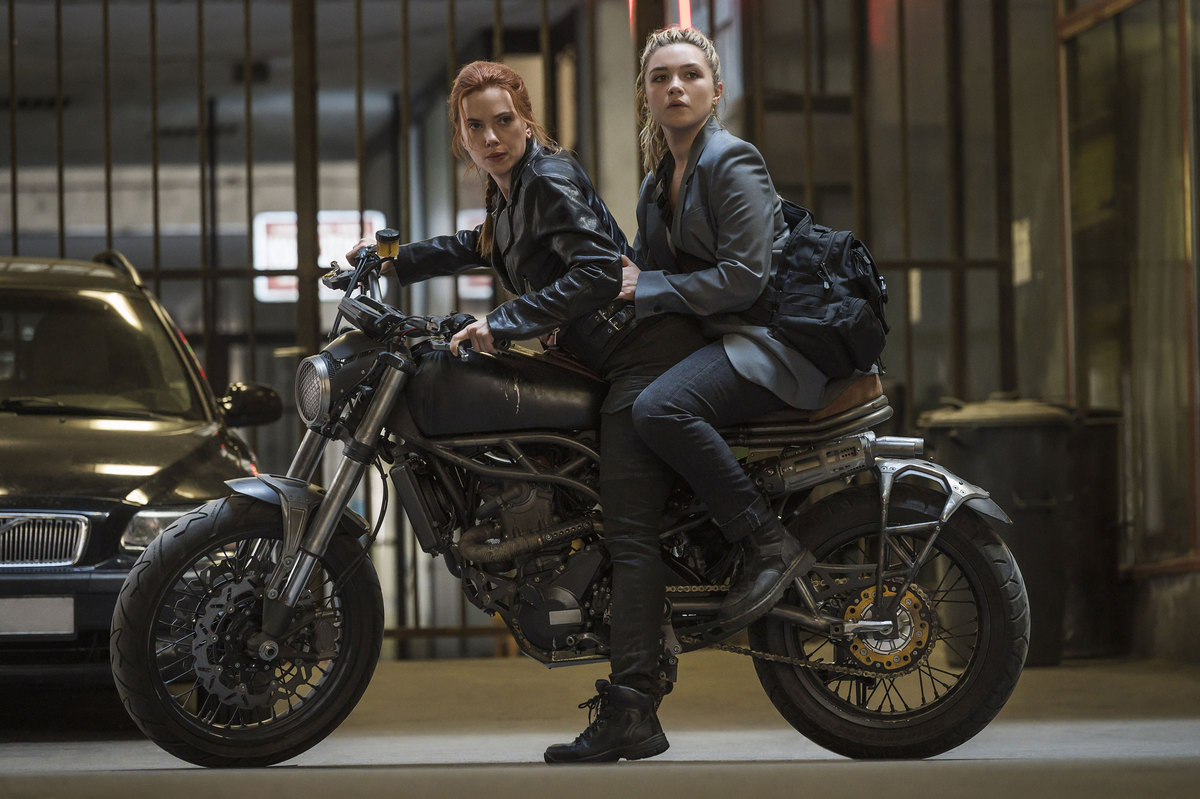 This film was long overdue, “Black Widow” got her fair share of content in the Marvel Cinematic Universe yet her past was never fully explored. There were hints provided to us in “Age of Ultron”, yet it was never dived into deeply. The way this film introduced us into the world of Natasha Romanoff, instead of “Black Widow” was phenomenal.

It introduces a brand new cast of super-interesting characters such as Florence Pugh‘s Yelena Belova, Rachel Weisz‘s Melina Vostokoff and David Harbour‘s Alexei Shostakov while showing us a side to Natasha, her origin and her familial bonds the way we’ve never seen.

The film explores Natasha and Yelena’s past, their history as trained killers and the things they did before Natasha joined SHIELD. The movie follows a discrete, yet action-packed approach to its story as Natasha and Yelena fight, kill and mow through goons while attempting to uncover secrets of their broken past and maybe even mend it.

This wouldn’t work if the chemistry between these actors wasn’t absolutely on point, and it was! Scarlett Johansson, Florence Pugh, David Harbour and Rachel Weisz all work hand in hand with one another in this film, yet the chemistry between Scarlett and Florence stands tall above everything else. The way these characters interacted, their conversations and their amazing humor had my stomach hurting inside of the theaters. 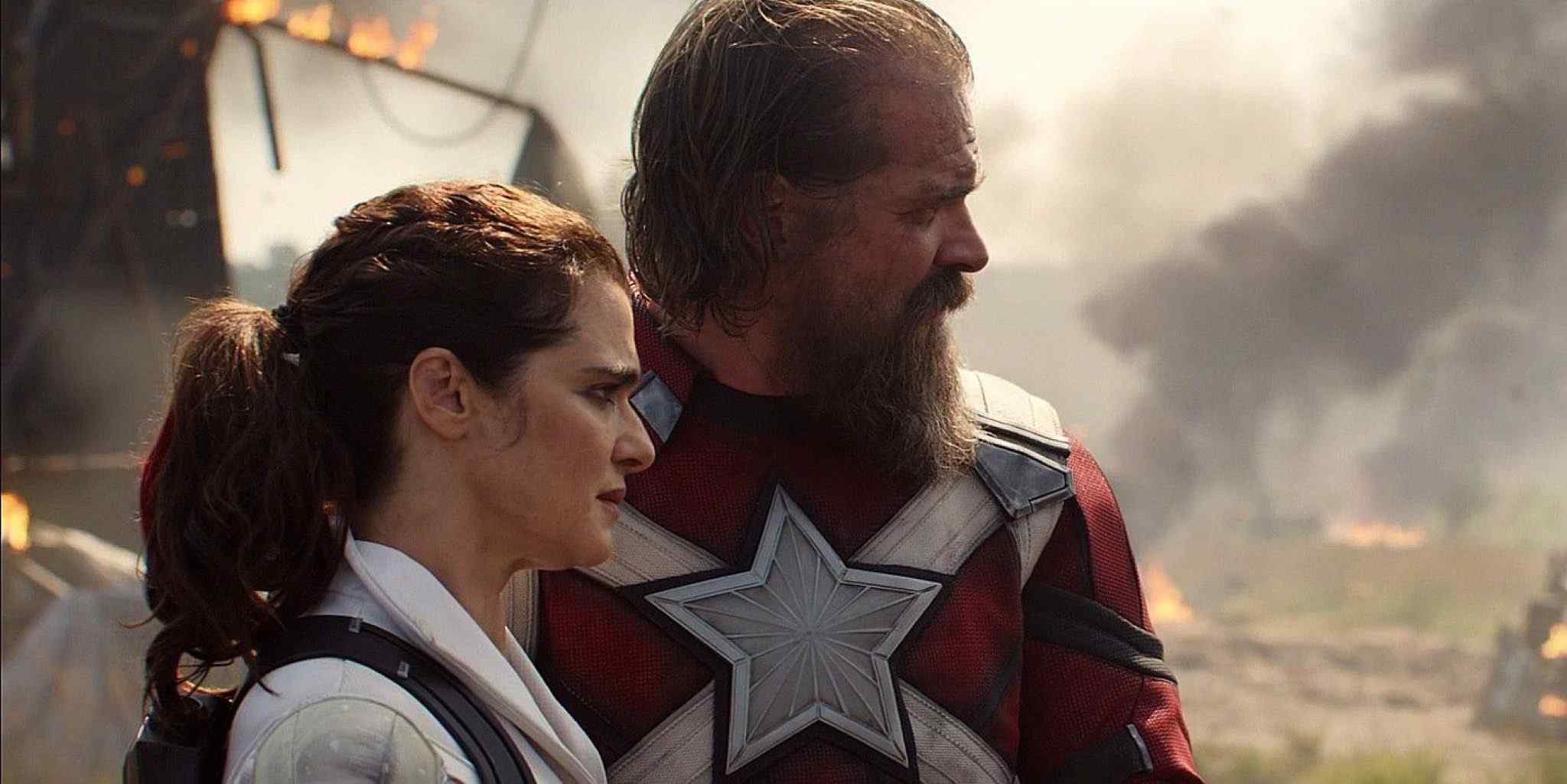 Scarlett Johansson shows us a side to Natasha that we hadn’t explored ever before, this vulnerability, sentimentality and pure affection towards her friends was hidden deep in the MCU lore. Now that it is finally out, we can’t help but want more of this kind of content. I would be lying if I said ‘this movie would be just as good if Cate Shortland wasn’t the director’.

For those of you who don’t know, Cate Shortland’s been working in Hollywood for ages and has found herself to become an indie darling of sorts. This was her chance to break into the mainstream, and she did it beautifully. “Black Widow”’s direction is magnificent.

The film is paced so well, with a fluidity that you can’t find in most of the other MCU Formulaic flicks. The parts where this film consistently manages to land its humor, while in the middle of action sequences and even the more dramatic moments are bafflingly well directed.

Cate Shortland succeeds in creating a film that is aesthetically pleasing, consistently funny, packed to the brim with action and emotion. It deals with trauma, as it plays one of the biggest parts in Natasha Romanoff’s story. She was raised and trained to be a killer, and it is safe to assume that she went through some questionable experiences which resonates the parts in “Age of Ultron”. Marvel Cinematic Universe’s continuity plays a huge part here, because the moments where you see Natasha’s life that you hadn’t before feel nostalgic due to our brief encounters with it in the past.

Now, to talk about one of the strongest aspects of this movie and that is the setting. “Black Widow” was shot in Hungary, in the beautiful city of Budapest. The thing that works so well about this film’s setting is the aesthetic. Hungary is a country that is completely full of emotion, history and beauty; Budapest is the capital and it is filled to the brim with these aesthetics.

The theme of the film revolves completely around Natasha Romanoff’s history, her emotional state and the beauty of her relationships. The setting gives the cinematographer Gabriel Beristain to work his indie camera magic and to put his heart and soul into this feature film. I must say, it is a gorgeous film and one of the best shot films in MCU history. Despite being much grounded in reality when compared to the otherworldly settings in other Marvel films, “Black Widow” puts itself as a top contender for visually pleasing Marvel films.

The only part where I see this film being a bit lackluster is the overall ending. The film starts and ends well, yet it doesn’t lead to anything and doesn’t contribute too much to the overall Marvel Cinematic Universe. It’s a film that was made to give Black Widow history, but the timing of release and the continuous delays had a huge impact on its overall effect. It does introduce some new characters into the universe, and hopefully they would have a part in the cinematic universe going forward.

This is about a decade too late, however, this film managed to grip me and entertain me, even though it’s something I never even asked for. Maybe it feels even better because of the pandemic and the long LONG while of distancing I had from MCU movies. It became ritualistic for me to watch at least three or four Marvel Cinematic Universe films every year. So, when 2020 hit and I got no MCU theater experiences for a whole year and a half (save for some of the brilliant television series) it definitely had an effect on me.

“Black Widow” was a breath of fresh air, introducing some amazing new characters and giving one of the most iconic female superheroes of all time; a much needed closure and the near perfect send off if it wasn’t for the pandemic and the botched release schedule.