207
VIEWS
Share on FacebookShare on TwitterShare on LinkedIn
ADVERTISEMENT

Computer graphics have changed filmmaking forever. The advancements in computer-generated technology has allowed for the medium to ascend past the uncanny valley. The results have led to films featuring more fantastical worlds and creatures that are boundless in imagination.

Many hit films use CGI without you even knowing it, as in 2019’s “Parasite” where the top floor of the wealthy home was added in with special effects.

But how about when it comes to applying computer graphics to actors? Tech that was once used for crafting amazing creatures, machines, and locations has now grown capable enough of replicating the human form. The early examples of CGI humans always felt blocky, rubbery, and a bit dead inside. You can see just how off these types of characters look in Pixar’s “Toy Story” in 1995 or Robert Zemeckis’s “The Polar Express” in 2004. While the characters had plenty of detail, they were far from seamless, even with the addition of motion-capture technology in “The Polar Express”.

The technology for rendering humans would improve rather quickly though. This was tested out by rendering dead actors into commercials. This was previously accomplished by simply using old footage and inserting other characters or objects on top of this. You can see this type of insertion present in “Forrest Gump”, where the titular character finds himself interacting with archival footage of JFK and John Lennon. While there was some computer graphics used for these sequences, it was minimal and not used to fully recreate the human characters.

One of the earlier examples of trying to seamlessly duplicate a dead person in CGI was with an advertisement for Orville Redenbacher’s popcorn. Orville Redenbacher had died in 1995 but he was resurrected in CGI form for a commercial in 2007. The results were, well…still creepy. You could see there was an off nature to the way he moved and spoke, especially since the ad featured the old character attempting to talk about MP3 players while promoting his brand of popcorn. The details, however, were pretty astounding for the time.

The ability to replicate dead people in movies was well on its way with the advent of using CGI to de-age or up the age of the characters. In 2008’s “The Curious Case of Benjamin Button”, Brad Pitt’s character of Benjamin is somebody who ages in reverse. He starts off old and only grows younger as time passes. To accomplish the complex aging process, CGI was used to transform the actor into more of an elder. More of this technology would be used in 2010’s “Tron: Legacy” to create a young Jeff Bridges (in the form of cloned villain Clu). The younger Bridges was accomplished with studying Bridges‘s younger roles, such as 1984’s “Against All Odds”, to find just the right look that could be rendered in CGI.

All of the pieces were in place to make the jump for better resurrection of dead actors. One of the most notable examples of this was with 2015’s “Furious 7”, the seventh Fast & Furious film. Paul Walker returned for the film but died during filming. His remaining sequences were complete using stand-in actors that would have their faces changed to Paul’s and older footage of Paul extracted from outtakes and deleted scenes. 350 shots were completed with a stand-in for Paul accompanied by visual effects. 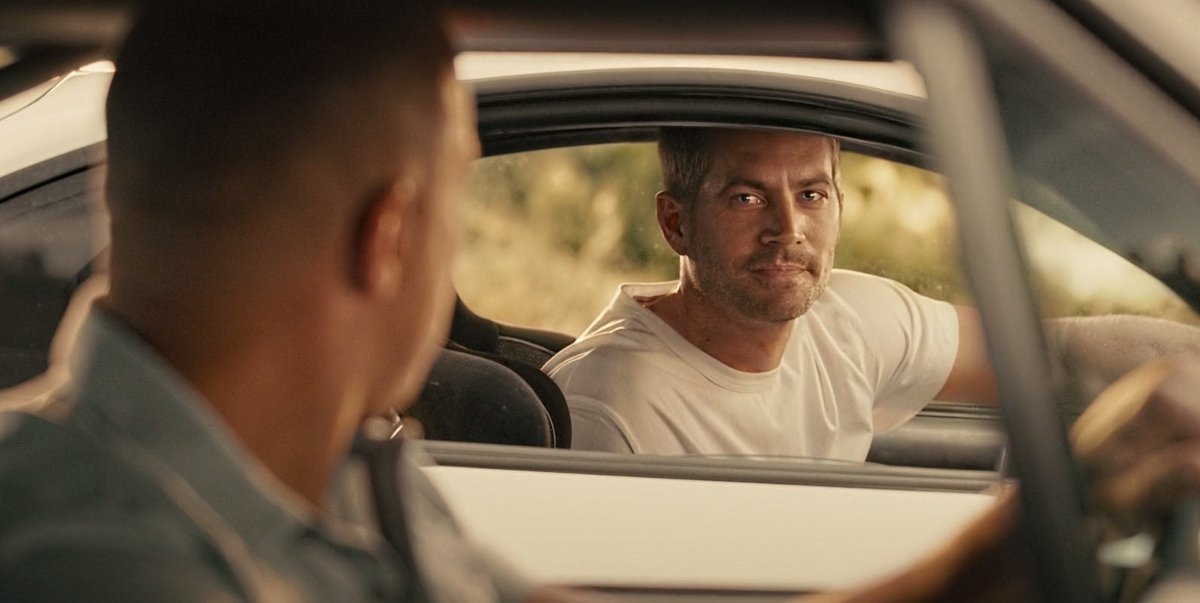 Of course, a question arises from these advancements in technology. How ethical is it to use this technology and when does it go too far? In the case of “Furious 7”, it seems appropriate to finish the film with Paul considering he had already started filming before his death. With him being in the film, the director decided to go the extra mile in finishing up the film with a CGI-inserted Paul. Such production delayed the release of the film by about a year but managed to give the character a proper send-off and make the film a dedication to the late Paul Walker.

You can see how this plays out in the latest trilogy of “Star Wars”. The new saga featured the returning actors of Mark Hamil, Harrison Ford, and Carrie Fisher to the old roles of Luke Skywalker, Han Solo, and Leia Skywalker respectively. However, after filming had completed on “The Last Jedi” in 2016, Fisher passed away. This ran counter to plans for the character considering that she was intended to live on into 2019’s “Rise of the Skywalker”. While she would have easily been written out of “The Last Jedi”, considering her character nearly dies and spends most of the film in a coma, the script went ahead as written.

For placing Carrie Fisher in “Rise of the Skywalker”, a combination of CGI and extra footage was used to insert the actor into her final Star Wars role. There’s a question of just how ethical this choice would be considering that Fisher didn’t have any say in appearing in this third film before being given the option to observe what the project would be. However, Billie Lourd, Fisher’s daughter, approved the choice in using the likeness of her mother in such a film. 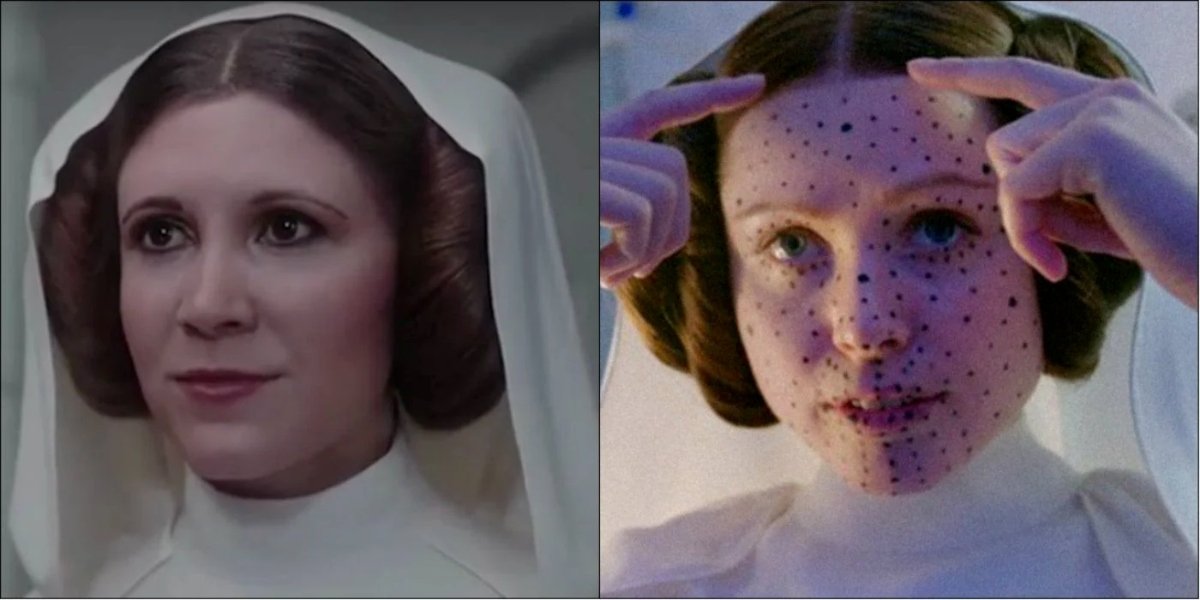 But this wasn’t Fisher’s first CGI recreation. Prior to her death, she was also replicated as a younger version of herself in the Star Wars prequel picture, “Rogue One”. Her character of Leia appears at the end of that film looking exactly as she did in “A New Hope back” in 1977. It was bittersweet to see, considering that Fisher had passed away roughly two weeks after the premiere of “Rogue One”.

Speaking of “Rogue One”, there’s another dead actor who appears in this film. Peter Cushing’s character of Grand Moff Tarkin, who only appeared in “A New Hope”, was resurrected for some brief scenes. Much like with “Rise of the Skywalker”, the filmmakers asked for the permission of the Cushing estate to use the likeness of the character. That being said, the character still seemed off for serving more as a reminder that Cushing is dead and is only existing on the screen as a CGI character.

So it’s less a question of legal concerns as it is an ethical one. After all, if any actor can be recreated in CGI when they’re dead, what’s to stop studios from pursuing this route when they’re alive? It’s a concern that was touched upon in the 2013 experimental film “The Congress”, where Robin Wright plays a writer who signs over the digital rights to her likeness to be used as a CGI actor.

It makes the most sense that CGI would be used for actors who were already signed on for a film but died before completing filming. It would make sense to recreate them to use this footage to finish a film. When it comes to duplicating older actors who may not be with us any longer, there’s more dignity in recasting than recreating with computer graphics. Just take a look at “Doctor Sleep” which recast numerous actors to portray the events of “The Shining”. That film managed to not be distracting for daring to recast and not rely on visually recreating everything.

In other words, use this technology sparingly and try to give the dead some dignity, especially if they’ve long since passed on.